Embry – This Is How Close We Are To Total Collapse

Today John Embry spoke with King World News about the recent action in gold and silver and what the central planners are doing right now in an attempt to prevent a total collapse of the financial system. Below is what Embry, who is chief investment strategist at Sprott Asset Management, had to say.
“I was absolutely outraged to be quite honest with the jobs report on Friday in the United States. If you applied logic and actually looked at where these jobs were created, I don’t think there is any possible chance that those numbers are correct…”
John Embry continues @ KingWorldNews.com

This Is The S&P With And Without QE

zerohedge.com / By Tyler Durden / 05/06/2013 16:53
For a while there, it seemed that even the densest of career economists who try to pass for stock pundits on financial comedy TV, were starting to get that without the Fed’s (and the ECB’s, and the BOE’s, and the BOJ’s) QE, the market would be much, much lower (whether 500 points lower as Gundlach suggested or much more, remains unclear). After all: by now it should have been clear to most that QE is doing nothing for the economy, and everything for the stock and bond market (here we certainly agree: there is a bond bubble, which by implication there is an even more massive stock bubble too – anyone who says the two are unlinked can be immediately put on mute).
This is why we presented this chart previously:

READ MORE
Please share this article
at 12:06 AM No comments: 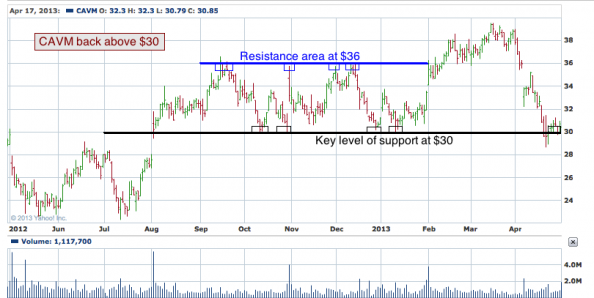 For the last (9) months CAVM has been holding a level of support at $30 (black). After a brief dip below that level last week, the stock has now gotten back above $30. Assuming the stock moves as it has in the past, a rise to the $36 resistance (blue) should be in the cards.
The Tale of the Tape: CAVM has a key level at $30. A long position could be entered at the $30 support with a stop placed under that level. A short play could be made on a break below $30.
Please share this article
at 12:05 AM No comments:

Warning: Oil Due For A Major Pullback 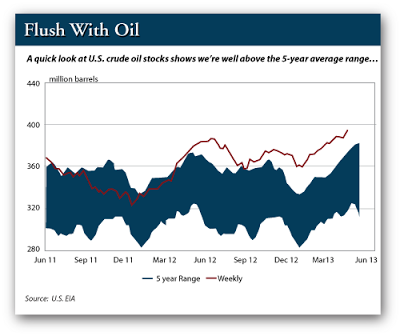 No, your eyes aren’t deceiving you – today’s headline is correct.
The price of oil is set for a dip lower – one way or another. Today I’ll show you why.
I’ll also explain why it’s not the end of the world for oil investors – quite the opposite actually! And I’ll share my thoughts on playing oil in the next six months…
You’d have to admit from a fundamental standpoint $95 oil is a little high, especially if U.S. crude storage (as of last week’s data) is at its highest level since 1931.
Just to make sure you’re caught up on the story take a look at the most recent U.S. storage data: (more)

Planning for retirement is one time when a crystal ball would come in handy. If only you could see ahead to know exactly how much you’d need to live the good life in your retirement years. Unless you discover a crystal ball or develop clairvoyance, you’ll have to make do with educated guesses and advice from experts to plan a realistic retirement budget. Take the things you know and the experiences of others to paint a reasonable picture of how much money you’ll need in the years ahead.

Your lifestyle will probably change when you retire. You’ll spend less on work-related expenses such as clothing, lunches out and transportation, but you may spend more on travel and recreation. If you plan to move after retirement, your housing costs will change. Downsizing could mean lower housing costs, but moving to a resort area could mean you spend more on housing. If you plan to pay off your house before you retire, you won’t have to worry about a mortgage, but you’ll still need money to pay real estate taxes and insurance. Thinking about these kinds of lifestyle choices and looking at the amount you spend today and estimating future expenses will help you begin to draw up your retirement budget.

Even if you expect to be covered by Medicare when you retire, you’ll need funds for prescription drugs and co-payments Medicare doesn’t cover. Plus, the cost of Medicare comes out of your Social Security checks and rises with inflation. As people age, medical costs rise. The United States Department of Labor estimates that in retirement, medical costs will rise about 7 percent a year and that you’ll spend 20 percent of your budget on medical expenses.

Costs rise with inflation. While it’s impossible to predict future inflation rates, you can look to historical rates for clues. Between 1980 and 2002, the U.S. Department of Labor reports that inflation varied from a high of 13.5 percent to a low of 1.6 percent. The Department of Labor suggests using 3.5 percent when estimating your future retirement expenses, which represents the average rate of inflation for the last 20 years.

One oft-quoted rule of thumb is that in retirement, your expenses will be about 70 percent of what you spent during your working years. With the average retirement stretching to 30 years, people remaining healthier and active longer, and with rising health care costs, the Department of Labor suggests you aim for a budget of 80 to 90 percent of what you currently spend.

Expenses are only half of your retirement budget. You need to know if you’ll have enough income to meet those expenses. The Social Security Administration will give you an estimate of what you can expect to receive in benefits, depending on when you begin to collect your checks. Add this amount to any pension benefits you’ll receive. If you have other retirement savings, such as a 401(k) or IRA, determine how much you’ll withdraw from these funds each year. Vanguard suggests aiming for a 3 to 5 percent withdrawal rate in order to make the funds last your full retirement. You can increase these percentages as you age if you need more money.

GOLDMAN: These Are The 40 Most Undervalued Stocks In The Market

David Kostin, Goldman Sachs' chief U.S. equity strategist, sees almost no upside to the S&P 500 from now through the end of the year.
However, within the market he sees no shortage of stocks and sectors expected to outperform.
In his new U.S. Monthly Chartbook, Kostin provided an updated list of stocks with the most upside potential today.
This time around, the list is dominated by oil and gas firms including drillers or refiners.  The rest are ringers across a broad range of industries, from tires to telecom.
According to Goldman's analysts, the 40 stocks on this list offer 23% to 57% upside relative to their recent prices. (more)

May 03, 2013
Base metal ETFs have been chronically weak performers for much of 2013. The combination of a strong dollar, sluggish manufacturing figures, and a slumping China have pushed products like copper sharply lower since the start of the year.

However, Friday marked a huge reversal for the space, as many metals in the segment saw banner days. In fact, the space led the commodity world to close out the week, with gains of nearly 6.6% seen in the spot copper market.

Behind the Copper Price Surge
The story of copper’s turnaround in the past few hours was really a global phenomenon. First, the increase in copper started in the Asian markets as investors scooped up the red metal from its lows.
Then in London, investors saw that there have been big drawdowns in supplies as of late, including a massive 7,425 metric ton drawdown. Inventories still stand at 608,700 tons, according to Forbes, but this was the second biggest drawdown in the past four years for the base metal.

The bullish short-term trend continued for copper in the U.S. as the robust jobs report and the resulting equity surge caused many to buy the metal. Short covering was probably also at play for the product, adding to the metal’s impressive surge to close out the week.

ETF Impact
This news was obviously well received by the various base metal and copper ETFs on the market, as these all rose by several percentage points on the session, including the following funds:

PowerShares DB Base Metal Fund ( DBB )
This ETF roared higher by close to 4.4% on the day on volume that was surprisingly below the average. Copper takes up about 35% of the assets in the ETF, while aluminum and zinc round out the rest of the portfolio.

iPath Dow Jones UBS industrial Metals ETN ( JJM )
This product also had a solid session, gaining over 4.5% on higher-than-normal volume. The ETN holds four commodities in its basket though—copper, aluminum, nickel and zinc—though it allocates a bigger chunk to copper at 42% of the portfolio.

PowerShares DB Base Metals Double Long ETN ( BDD )
For a truly volatile play on the base metal market, investors could look to BDD and its 200% leveraged exposure. The product has a similar holding profile to DBB (though less in zinc), and was up close to 8.1% in Friday trading.

iPath Dow Jones UBS Copper ETN ( JJC )
And finally, the most popular pure copper product on the market saw its price surge by nearly 6.7% on the day. Volume was also quite good for this ETN, as more than 144,000 shares changed hands, roughly double the normal level.

Copper Mining ETFs
Meanwhile from an equity perspective, the trading was also quite good. Currently there are two copper mining ETFs on the market; ( COPX ) from Global X and ( CU ) from First Trust.

Both of these saw volume that was higher than normal, and gains approaching what investors saw in the commodity market. However, it is important to note that gains were less in the equity world today, though these have also been worse performers in the YTD time frame as well.

Bottom Line
Today was a perfect storm in the copper ETF market, as gains were pretty easy to come by. Not only did the jobs report result in a bullish trend, but investors also saw international markets pile on as well.
Still, even with this huge turnaround, copper ETF investing has been pretty terrible throughout 2013. So more than a few sessions like today’s will be needed to boost copper back to prominence and into the green for the calendar year.
Please share this article
at 12:03 AM No comments: