Charles Goyette: Is it possible that the vaults of the world’s central banks, believed to be stacked with gold bullion, are really empty? Is all the gold actually there?

Something about the numbers doesn’t seem to add up.

The importance of the question accelerates in the face of global money-printing, which is also accelerating. Since the start of the economic meltdown five years ago, the balance sheets of the world’s central banks have been growing at a frantic pace.

That’s a lot of money-printing.

But take heart, because while the currencies of all those countries are absolutely, 100% fiat — redeemable in nothing but more of the same paper — the world’s central banks are said to have huge reserves of gold bullion. The U.S., U.K., the euro zone, Switzerland, Japan and the International Monetary Fund report having gold reserves of 23,349 tons among them.

Central banks of the world’s terminally indebted countries prefer the fiction that paper money that’s printed at little cost, or digital bookkeeping entries that are created at no cost, is money and therefore constitutes real wealth. However, there must be a reason that central banks universally hold gold reserves.  (more)

Rare Earths Could Be Pawn in Island Spat... Again

We’ve written before about rare earth elements (REEs): the futuristic sounding group of 17 minerals with unpronounceable names that play a critical role in everything from hybrid cars to flat screen TVs. Of course, “rare” is something of a misnomer, as the minerals that make up the group are not all that rare. They are, however, difficult to mine in profitable concentrations.
As of now, China controls over 90 percent of the world’s rare earth mining concerns. In the past, this near monopoly has allowed them to exert a significant influence over both price and supply. In 2010 and 2011, China used its position to send prices on a roller coaster ride, causing some individual minerals to quadruple in price. In 2011, prices for some elements doubled again, hitting record highs.
Continue Reading at EuroPac.net…
at 12:06 AM No comments: Links to this post

To review the H&S pattern that has formed on Apple's stock, please take a look at the 1-year chart of AAPL (Apple, Inc.) below with my added notations: 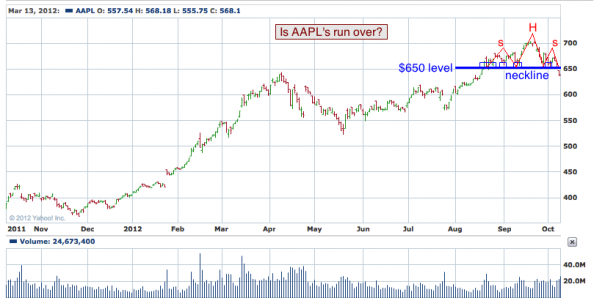 AAPL has been on a 4-month rally since its April-May correction. Over the last (2) months, AAPL has created a very important level at $650 (blue), which would also be the "neckline" support for the H&S pattern. Above the neckline you will notice the H&S pattern itself (red). Confirmation of the H&S occurred when AAPL broke its $650 "neckline" support. The stock should be moving lower from here.

Keep in mind that simple is usually better. Had I never pointed out this H&S pattern, one would still think this stock is moving lower simply if it broke below the $650 support level. In short, whether you noticed the pattern or not, the trade would still be the same: On the break below the key $650 level.
at 12:05 AM No comments: Links to this post

Collapse of the Current Monetary System?

About this week’s show:
– Gold’s growth ahead far greater than what’s behind
– Just how smart is the average investor?
– Ian McAvity Dow/Gold Target: One to One

Is The Volatility Index Really That Low? (Roche)

Guest Contribution by Cullen Roche, Pragmatic Capitalism
One thing we keep seeing all over the place is how the VIX (volatility index) is so low and that this means the market is extremely complacent and therefore on the verge of a decline.  This might be true, but I think it’s important to provide some perspective when using an indicator like the VIX.  To get a better idea of the VIX it can be helpful to look at more than merely the front month contract.  In a recent research note analysts at Societe Generale elaborated on the current environment and the story behind the current VIX levels:


“the most striking aspect of the current situation is the historical steepness of the vol contango, meaning that mid/long-term volatilities are much more expensive (in vol point and historically) than short-term vols. If we try to translate this into a market sentiment analysis, we can say that the market is pretty confident in the short-term outlook but extremely cautious on the longer-term outlook.” 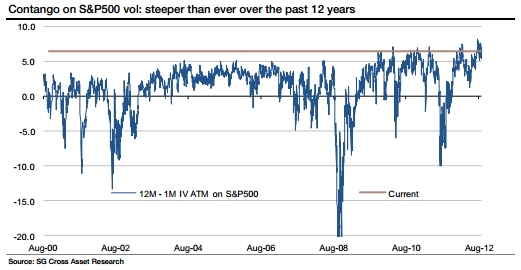 Without getting bogged down in the details, that basically means traders are complacent in the near-term, but extremely cautious in the long-term.  So you kind of have a mixed reading here from a sentiment perspective.  The VIX is useful in gauging perspective, but this is a good example of the mixed messages it can send at time.

John McCamant, editor of the Medical Technology Stock Letter, doesn't care if a scientist or a businessperson is at the helm of a biotech company, as long as management has skill and broad experience. Investors need to look for companies that offer "specifics, catalysts and deliverables." He names exactly that kind of company in this exclusive Life Sciences Report interview.

The Life Sciences Report: John, in February we discussed secular moves in biotech. How has your performance been since then?

John McCamant: It has been very good. For the calendar year we are up 71%, and last week The Hulbert Financial Digest ranked us number one for both the past 12 months and calendar year. Our February prediction that this would be a good year for biotech has materialized.

TLSR: Indeed. On Sept. 13, the iShares NASDAQ Biotechnology Index (IBB:NASDAQ) was up 48% from one year ago. How far along are we in this trend?

JM: We see this as a rising tide, in which you are just beginning to see some differentiation. It is no longer a matter of simply buying the space or the funds. We are at a point where individual companies will need to provide specifics, catalysts and deliverables. Going forward, I think the indexes will have a bit of a problem, because investors have become more selective.

TLSR: That is an interesting way to put it. We had the secular move and now it is a bottom-up story.

JM: Or what we refer to as a stock-pickers' market.  (more)