Paul Tudor Jones ruffled more than a few feathers last week when he warned first that "we're in the middle of a disastrous market mania," and second he explained that "this gap between the 1 percent and the rest of America, and between the US and the rest of the world, cannot and will not persist," concluding that "historically, these kinds of gaps get closed in one of three ways: by revolution, higher taxes or wars. None are on my bucket list." His thesis is simple and profound as the following full speech shows...
Ultimately, Tudor hopes, the free market will take hold and reward the companies that are the most just...


“Capitalism has driven just about every great innovation that has made our world a more prosperous, comfortable and inspiring place to live. But capitalism has to be based on justice and morality…and never more so than today with economic divisions large and growing.”

Barrick Gold Corporation produces and sells gold and copper. It is also involved in exploration and mine development activities. The company holds interests in various properties located in the United States, Zambia, Chile, Dominican Republic, Argentina, Tanzania, Canada, Saudi Arabia, Australia, Papua New Guinea, and Peru. As of December 31, 2013, the company had proven and probable mineral reserves of 104.1 million ounces of gold and 14.0 billion pounds of copper. Barrick Gold Corporation was founded in 1983 and is headquartered in Toronto, Canada.
Take a look at the 1-year chart of Barrick (NYSE: ABX) below with added notations: 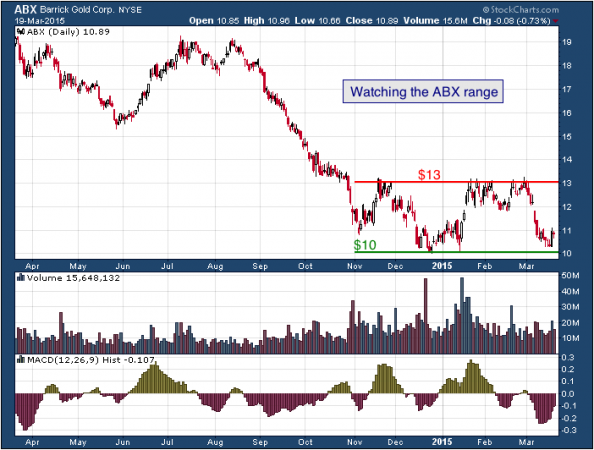 After a strong decline from mid-August until the end of December, ABX has been trading sideways over the last 4 months. During the sideways move the stock has formed a common pattern known as a rectangle. A minimum of (2) successful tests of the support and (2) successful tests of the resistance will give you the pattern.
ABX’s rectangle pattern has formed a resistance at $13 (red) and a $10 support (green). At some point the stock will have to break one of the two levels.

The Tale of the Tape: ABX is trading within a rectangle pattern. The possible long positions on the stock would be either on a pullback to $10 or on a breakout above $13. The ideal short opportunity would be on a break below $10.
Please share this article
at 12:03 AM No comments:

I'm back in the saddle after roughing it in the desert for a week. I fended off mountain lion attacks…lost a few bucks betting on March Madness during a detour to Vegas…and meditated on the markets while staring up at the stars.
Stocks stabilized in my absence after wandering lower during that pesky early-March pullback. The major averages aren’t setting the world on fire right now, but some of our trades are getting a bit overheated…
So today we’re taking profits on three of them…(more)

The residential construction group took a huge hit earlier this year when one of its smaller constituents fumbled its profits. From the way other neighborhood developers have maintained their margins, I suspect the risk of contagion is lower than Wall Street initially feared. While entry-level buyers are scarce, competition for contracts does not seem to be forcing many builders to offer concessions to more established homeowners looking to trade up.
In this context, homebuilder stocks like Hovnanian Enterprises, Inc. (HOV) look cheap even if the housing market simply keeps muddling along through spring. I’m not so sure that’s going to happen, but that’s beside the point.
Hovnanian’s center of gravity remains east of Indiana, with most open inventory in California and Texas limited to high-end housing. While Texas might be a risk factor, inventory there is relatively small, concentrated in the more economically diversified markets of Galveston and Houston. Galveston is not shale country, and Houston is the heart of the “new” Texas, where resource extraction now only accounts for 3% of all employment.
None of this seems to argue for the 7% haircut HOV has seen in March — and Wall Street seems to agree. Although the wide float and low share price make the math for earnings per share tricky, analysts have only reined in their net-earnings estimates by 0.7% since West Coast counterpart KB Home (KBH) sent up the flares on Jan. 13. They may all be grossly wrong, but they’ve had plenty of time now to adjust their models.
If they’re on track, all HOV needs to do is hit their $4.07 consensus price target in the next few months to get within sight of scoring a solid win.
The stock has also been caught up recently in news that February was a not-so-great month for housing construction. I believe this was largely due to the weather, but I’ll be watching closely for any signs of catch-up activity as the spring thaw moves across the company’s core markets in the Northeast United States.
Meanwhile, the chart already seems to be recovering.

The stock’s Moving Average Convergence Divergence (MACD) line is approaching a bullish signal cross, and the Relative Strength Index (RSI) is bouncing out of near-oversold weakness.
What I like about this company has not changed. This is a stock for which the worst-case scenario is already priced in, giving it a multiple below 2X trailing earnings and a doomsday forward valuation that’s still roughly 50% discounted to the broad market. While the stock is certainly vulnerable to housing market sentiment, this remains a well-managed company with a chart that looks ready to make its next run.

Martin Armstrong on Bill C-51: About Money Not Security; and James Corbett on China