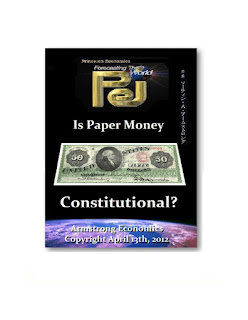 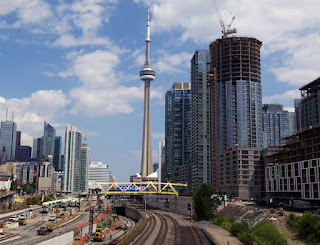 This development boom, and accompanying price increases, is not about housing to meet a sudden surge in population. It is not about an economic boom. If it was, Calgary and Edmonton would have 128 cranes, like Toronto does, building housing and pushing up all prices. Instead, this is taking place in Toronto and Vancouver where economies are moribund.

Conventional wisdom is that this is the market at work. This is not the market at work. This is manipulation of a government system of open-ended mortgage insurance that is poorly supervised. What is going on here is a deluge of hot money from abroad that is creating an artificial and potentially dangerous real estate bubble. This mania happened in several other countries — where it was shut down — and has spread to Canada. Officials here have been urging restraint but that is not the solution. A ban on foreign buying of residences is the only solution.  (more)
at 12:06 AM 1 comment: Links to this post

Egon von Greyerz: Keep your Gold outside the banking system!

In an audio interview with Metallwoche, Egon von Greyerz talks about the options of either a deflationary implosion of the financial system or unlimited money printing leading to hyperinflation and the importance of gold for both scenarios.

Whenever gold is in a longer term sideways pattern as it is now for nearly seven months, a lot of smaller investors lose their patience and doubt their investment. Therefore we enjoy offering to you today a very powerful talk with Egon von Greyerz, founder and managing partner of Matterhorn Asset Management and GoldSwitzerland. Egon strongly reminds us the real important things, investors shall always focus on…

Egon von Greyerz talks to us about unlimited money printing done by the central banks, why governments and political leaders are in an officially denial and what a deflationary implosion would really mean. Von Greyerz, born in Sweden and living in Zurich, Switzerland, has his view from in- and outside his own country. He therefore is a real professional source to discuss the current situation in Switzerland and if it is still save to store one’s physical gold in this country.

We Are Witnessing The Largest Financial Bubble In History 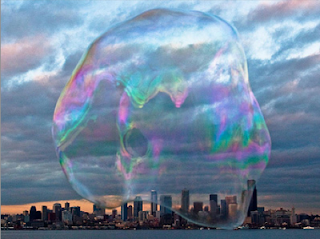 With continued volatility in global markets, 40 year veteran, Robert Fitzwilson wrote this exclusive piece for King World News. Fitzwilson is founder of The Portola Group, one of the premier boutique firms in the United States. Here are Fitzwilson’s observations: “In our opinion, the beginning of the dot-com bubble started with the Netscape IPO in the mid-1990s. Prior to Netscape, companies had to have a track record of earnings and cash flows before going public. It was normal to receive a prospectus or two per week prior to the Netscape IPO. Afterwards, it became a flood, almost a daily occurrence to have prospectuses arrive at our research department.”

“Bubbles occur when perception achieves escape velocity from reality. Asset values routinely oscillate between over- and under-valuation. Indeed, in normal times, the only way to “outperform” is to have an iron stomach and solid conviction (to buy when everyone is selling and to sell when there is apparently no reason to do so). (more)

Wages and Consumption Are Both in Long-Term Downtrends 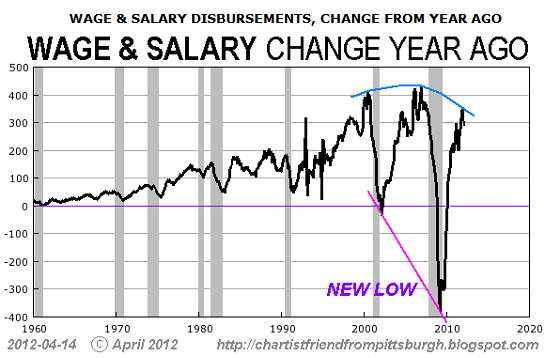 Employment, wages, income and consumption are all in long-term downtrends, and the policy of grandiose stimulus funded by debt has failed spectacularly to reverse these secular trends.


Courtesy of frequent contributor Chartist Friend from Pittsburgh, here are four charts of wages, income and consumption. The charts depict changes from a year ago (also called year-over-year) and the percentage of change from a year ago. These measure rates of change as opposed to absolute changes, and so they are useful in identifying trends.

As I noted in Why the Middle Class Is Doomed (April 17, 2012), advanced economies are caught in the pincers of rising costs of essentials (not just food and energy but education and medical care) and a global oversupply of labor that has been “localized” by the Internet, i.e. previously localized labor can now be performed anywhere on the globe.
The build-out of Internet infrastructure that culminated in the dot-com boom boosted employment, wages and consumption, and the credit-housing bubble of the mid-2000s also boosted income and consumption. Now that these temporary conditions have faded, what’s left is the relentless chewing up of traditional industries by the Web as distributed software boosts productivity while slashing the number of people required to create value.
What’s remarkable about the first chart is the increase in volatility in recent years: the changes in wages and salaries are increasingly dramatic. This might be reflecting the dynamics of the global economy pulling wages lower while massive financial-stimulus policies of the Central State and bank (the Federal government and the Federal Reserve) act to artificially boost wages with trillions of dollars in borrowed/printed money.
READ MORE
at 12:05 AM No comments: Links to this post

Muppets have received a lot of bad press since Greg Smith realized that he is not, in fact, a one-percenter. Fortunately Elmo’s back to reclaim his rightful place in the financial world: Making the seemingly incomprehensible comprehensible while politely pointing out what should be obvious to everyone not in diapers. That’s not so easy when the economic views espoused by everyone from central bankers to TV talking heads can only be accurately described as infantile.

It’s hard to get the right answer when you’re counting the wrong stuff, and maybe that’s why Wall Street’s minions never discuss income per capita. It’s a meaningful measure of economic strength that ordinary Americans can relate to. Well, that and it exposes “pro-growth” policies for what they actually are: An excuse to loot the country in broad daylight by focusing on GDP, where government money, no matter how horribly misspent, shows up in the “win” column. Strip away that illusion and it becomes crystal clear that their path to prosperity is our highway to hell.

And now for something completely different….the energy markets. There isn’t a whole lot to talk about regarding the general markets. We’ve been opening strong, finished weak and distribution days have been outnumbering accumulation days for awhile now. Sentiment remains bullish, which is a bad thing for the markets and I continue to see very few breakouts. I’m holding steady to my shorts and will likely hold over the weekend as well.

Why Bankruptcy Is the New Black 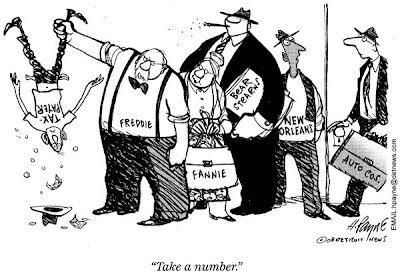 OK, OK, I’m not exactly one to write about fashion, but fashion is about trends, and investment analysis is frequently about identifying trends early, if possible even before they properly begin, to assume the vanguard position prior to a dramatic outperformance of a given asset, or investment style. And so, in exercise of my modest accumulated wisdom and experience, I am predicting a surge in US corporate restructurings and bankruptcies, if not already in 2012, then in 2013. There is just too much corporate capital being wasted and consumed on bloated, inefficient balance sheets. Investors, normally fearful of bankruptcy, will soon learn that it is, in fact, their best friend. Once a corporation is on the edge, the sooner you push it over, the better. Free up that capital, re-deploy it, run it lean and mean and, when the time is right, leverage it up and score the big returns. How best to invest for a world in which bankruptcy makes the front page of Vogue? Read on.

Truth may be the first casualty of war but semantics is the first weapon of debate. As Sun Tzu observed, to win a war without even fighting is the acme of skill. Well, if you entangle your foes in a semantic net, you can win the debate before it even begins. Just define your terms appropriately.

Well, to define a system, any system, as exploitative is to stack the rhetorical deck in favour of those who disapprove. What Marx fails to mention in this definition, however, is that the capitalist system seeks to exploit the greatest possible amount of surplus value from ALL inputs, be they energy, technology, the existing capital stock, as well as labour. If, for example, paying higher wages (or granting stock options) to hire skilled workers will enable the capitalist to extract more suplus value from, say, a given technology or, better yet, to develop an entirely new one, well then it is the technology that is being exploited here. But the word ‘exploit’ carries a negative connotation, denoting unfairness. I doubt that technology has much of a problem with being exploited, but semantics being what they are, a sensitive individual can still feel their emotional strings being pulled at the thought.

Luddites aside, most people, including those who rely on the government, or charity, or family handouts, or whatever form of assistance from the labour of others, rejoice daily at the exploitation of technology. Take the plow for example, which greatly improves crop yields. Or fertilizer. Or the food processing, transport and preparation network that practically serves up ready meals on your table, day in and day out. I do not belittle the plight of the poor for one moment, but to continue our semantics discussion, in most of the developed world, recall that, less than a century ago, the poor were referred to as ‘starving’. With over 46mn Americans receiving food stamps today, for example, it is difficult to apply the word ‘starving’ to the poor.

Rick Rule: What to do if you're frustrated by the gold and resource markets

Today, King World News interviewed one of the wealthiest and most street-smart pros in the business, Rick Rule. Rule is founder of Global Resource Investments, which is now part of the $10 billion strong Sprott Asset Management. KWN reached out to Rick to get his take on what is happening in key markets.

Here is what Rule had to say:

... "I'm too old to wish for chaos, but it's coming. I think the market's response to situations that make otherwise rational people seem nervous, is fairly amusing. What we are seeing right now is the rising tide of liquidity floating most ships, particularly the conventional ships. (more)
at 12:03 AM No comments: Links to this post