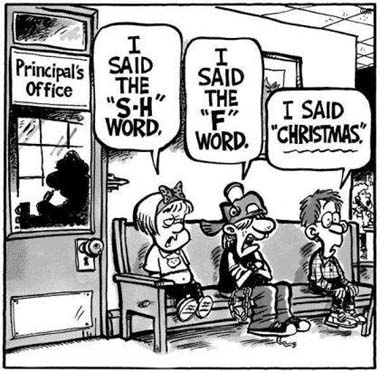 Northeast Utilities provides energy delivery services to residential, commercial, and industrial customers in Connecticut, New Hampshire, and Massachusetts. The company engages in the purchase, delivery, and sale of electricity; and owns and operates approximately 1,200 megawatts of primarily fossil fueled electricity generation assets. It also operates a natural gas distribution system in Connecticut serving commercial and industrial customers, as well as retail customers for heating, hot water, and cooking needs. In addition, the company offers gas transportation services to commercial and industrial customers, as well as provides electric transmission services. It serves approximately 3.5 million electric and natural gas customers through 6 regulated utilities. To review Northeast’s stock, please take a look at the 1-year chart of NU (Northeast Utilities) below with my added notations: 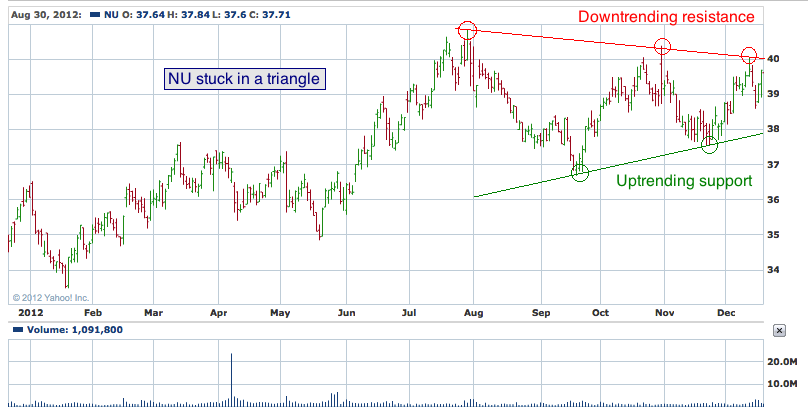 NU has created a simple chart pattern known as a symmetrical triangle. Combining a down trending resistance (red) with an up trending support (green) forms the triangle pattern. As the support and resistance converge on each other the pattern is created. Since there is no true way to know which way the stock will break, most traders will wait for the breakout or breakdown before entering a trade.
at 12:06 AM No comments: Links to this post

The global economy continues to be stretched thin. As a result, the demand for certain goods and services is decreasing, and exports are being hurt. Those countries that were the go-to economies for growth are producing less, and countries with more disposable incomes are reining in their spending.
When export numbers become bleak, the international transport business is one of the first industries to suffer. And, some companies aren’t strong enough to weather the storm at all.
Nordic American Tankers Limited (NYSE/NAT) is a tanker company that owns and operates double-hull crude oil tankers. Based in Hamilton, Bermuda, the company’s fleet has grown from three vessels in 2004, to 20 in 2012. The stock trades just above $9.00 and has a book value of $16.94 and average three-month trading volume of 633,000 shares per day. Nordic American Tankers has total liabilities of $250 million and holds almost $86.0 million in cash.
On November 15, 2012, Nordic announced that third-quarter revenue increased 37.5% year-over-year to $15.5 million. The company’s third-quarter loss improved to $23.3 million, or $0.44 per share. In the same prior-year-period, Nordic reported a loss of $37.6 million, or $0.80 per share. (Source: Nordic American Tankers Ltd. press release, “Nordic American Tankers’ 3Q2012 Report; NAT Is Very Well Positioned for a Market Upswing; Dividend Declared; NAT’s Strength Has Become Significantly Enhanced and Is Fully Financed Up to November 2017,” November 15, 2012.)
Why has Nordic American’s stock been reporting ongoing losses? The Baltic Dry Index tracks the price of moving major raw materials by sea. If the index goes down, this means freight charges are in decline—this in turn leads to lower profits.

Chart courtesy of www.StockCharts.com
Since the beginning of year, the Baltic Dry Index has fallen significantly—negatively impacting Nordic American’s profitability.
While revenues may be up, the company continues to be in the red. That said, Nordic American continues to issue quarterly dividends, and has done so for the past 61 consecutive quarters. Since the fall of 1997, the company has provided shareholders with dividends totaling $43.94 per share. 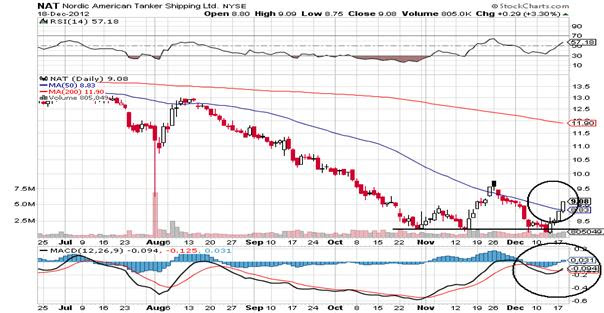 Chart courtesy of www.StockCharts.com
Since the beginning of the year, Nordic American’s stock has lost approximately 17% of its value. Recently, however, a number of interesting technical trends have been developing.
At the end of October, the company’s stock traded for as low as $8.29 and edged a little higher. Since then, the stock has tested this region three separate times—failing to break lower. The last time the company’s share price tested this region, it was on increased volume.
In the last couple of days, the stock price has crossed above its 50-day moving average, and the momentum on the moving average convergence/divergence (MACD) looks to be in favor of the bulls.
Nordic American’s share price has suffered due to global exports slowing, but it’s not alone. What differentiates this stock from other shipping companies is that it continues to be fundamentally strong and provides shareholders with a hefty dividend. The recent price action also makes it much more attractive.
at 12:05 AM No comments: Links to this post

Chart of the Day - Hollyfrontier (HFC)

The "Chart of the Day" is HollyFrontier (HFC), which showed up on Thursday's Barchart "All-Time High" list. HollyFrontier posted an all-time Thursday at $47.39 and closed up +2.29%. TrendSpotter has been long since Nov 12 at $41.37. In recent news on the stock, Oppenheimer on Tuesday raised its price target on HollyFrontier to $55 a share from $46 and maintains an "Outperform" rating on the company, citing what it sees as strong industry fundamentals and the company's commitment to creating shareholder value through dividends and share repurchases. HollyFrontier, with a market cap of $9.46 billion, is engaged in refining petroleum and it produces and markets gasoline, diesel, jet fuel, asphalt, heavy products and specialty lubricant products.