The prevailing wisdom on real estate investment trusts (REITs) is that they’ll be doomed once interest rates start to rise. Because of the way REITs are structured for tax purposes they have to pay out at least 90% of their taxable income in the form of dividends.
The thinking goes that higher interest rates will provide competition against the yields on REITs, making them less attractive. I’m never one to take rules of thumb at face value so let’s see how this theory worked in past rising rate environments.
The Wilshire REIT Index goes all the way back to 1979. Here’s how this index performed during prior rising interest rates environments:

In four out of the six periods where rates went substantially higher, REITs were actually positive. And in three out of the four positive time frames they showed outstanding performance. (more)
Please share this article
at 12:05 AM No comments: Links to this post 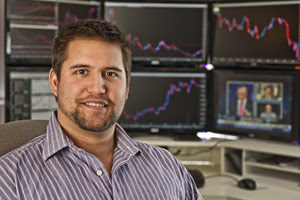 Chris Vermeulen, TheGoldandOilGuy.com believes that we’re getting very close to the bottom in gold and silver. When last we spoke, he said that he thought the weakness in precious metals was pointing to one more low before the trend reversed. Needless to say, Chris was right. Silver broke $18 the ounce yesterday and gold looks like it might break $1200. If that happens, even the most devout gold bulls might go running for the exits, in which case the low will be in and the bull will resume. Sounds logical to us.
Click Here to Listen

Ford Vs. GM: One Stock Could Have 50% Upside

Five years into a remarkable industry rebound, auto makers -- and their parts suppliers -- now generate record profit margins that would have been unthinkable a half decade ago.
The streamlining of almost every player has led to robust levels of the most important metric you should track: Free cash flow (FCF). One benefit of such financial strength: stock buybacks have been a major ongoing theme for auto parts suppliers.
Of course, the FCF and other financial metrics grow much larger when you are talking about the industry's top dogs: Ford Motor Co. (NYSE: F) and General Motors Co. (NYSE: GM). Both firms look far healthier -- from a financial perspective -- than they did a decade ago. (Earlier this week, Ford preannounced a challenging period ahead but largely reiterated long-term financial targets.) (more) 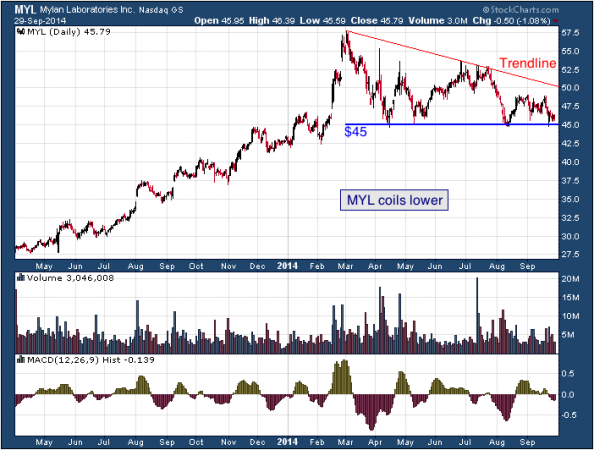 Over the last 6 months MYL has formed a key level of support at $45 (blue). In addition, the stock has created a down trending resistance (red) starting from the beginning of March. The stock has just recently tested the support and may be on its way back up to resistance again. At some point, MYL will have to either break support or break its trendline.

No doubt it’s been a difficult to be a goldbug lately. However, as a note from Ned Davis Research postulates, it could be much worse.

There were a number of factors working against gold in the 1980s, but notable among them was the strength of the U.S. dollar: It rose 54% from January 1980 to February 1985, versus as basket of major currencies.  LaForge and Pies write that it’s not difficult to see how the same pattern could play out again, weighing on gold. These waters aren’t friendly to contrarian investors, who usually lose out when betting against a rising dollar. Nor does it seem like a time for bargain hunters in gold, if the price is in danger of falling significantly more and pessimism hasn’t yet reached its peak.

They conclude: ”Gold is not worth additional capital at this point. It is oversold, but is trending poorly. Like gold, the overall commodity super-cycle looks to be dying.”
That’s likely not welcome news for gold ETFs, even as the SPDR Gold Trust (GLD) and Market Vectors Gold Miners (GDX) were already just about $1 from their 52-week lows on the last day of September.