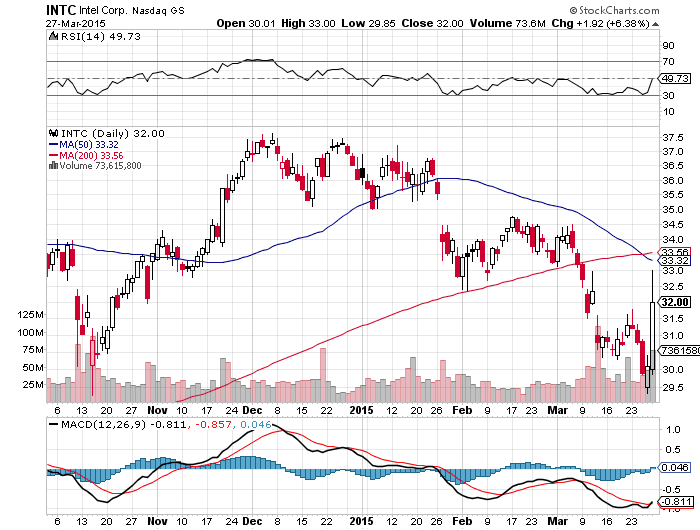 It’s hard out there for income investors.

10-year Treasuries are yielding just 1.9%, the dividend yield on the S&P 500 is also stuck right around 2%, and investors are mired in a constant will-they-or-won’t-they with the Federal Reserve.
Interest rates look like they’ll finally edge higher this year, but the Fed’s general dovishness means any rate hikes will probably be fairly insubstantial.

Luckily, there are still plenty of solid blue-chip dividend stocks out there. They’re a little riskier than pure fixed-income investments, sure, but they’re also a lot likelier to appreciate over the next five years or so, which won’t be true for bonds if rates finally advance.
With that said, today we’ll look at the top 10 dividend stocks in the Dow Jones Industrial Average — a set of blue chips that each yields more than 3% currently: (more)

zerohedge.com / by Tyler Durden on 03/28/2015 – 19:15
While Kyle Bass is usually the smartest man in the room, among this crowd he is Einstein as he carefuly explains – while sitting politely during status quo interruptions – the real state of the world “the unintended consequence of QE has been to widen the income gap,” what is behind the Potemkin Village of the stock markets, how The Fed is “backed into a corner” of raising rates against their will, and why bond yields (at the long-end) will drop further. Currency wars are net positive, as Greg Ip suggests, and will not end well, as he concludes in one section, “why haven’t all the Yen left Japan already?”

“How many rich people do you know today that are poorer than they were at the peak in 06/07 (apart from Dick Fuld), I don’t think I know any.. QE has been distributive to the rich… but now that the world has started this policy it is unable to end it…

Tesla Motors, Inc. designs, develops, manufactures, and sells electric vehicles, electric vehicle powertrain components, and stationary energy storage systems in the United States, China, Norway, and internationally. It also provides development services to develop electric vehicle powertrain components and systems for other automotive manufacturers. The company sells its products through a network of Tesla stores and galleries, as well as through Internet. Tesla Motors, Inc. was founded in 2003 and is headquartered in Palo Alto, California.
Take a look at the 1-year chart of Tesla (Nasdaq: TSLA) with the added notations: 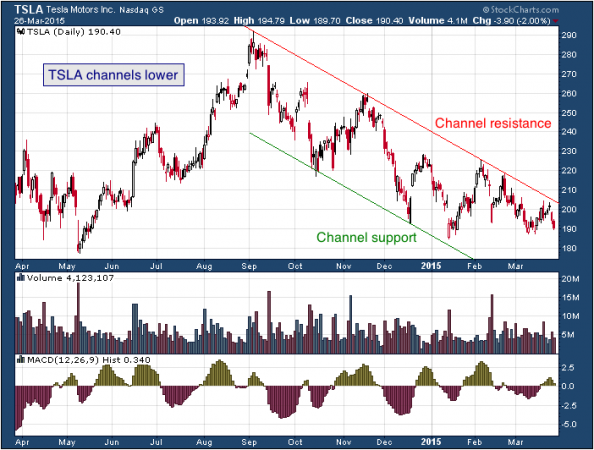 TSLA has formed a relatively clear down-channel chart pattern over the last 7 months. A channel is simply formed through the combination of a trend line support that runs parallel to a trend line resistance. When it comes to channels, remember that any (3) points can start the channel, but a 4th point or more confirms it. You can see that TSLA has several points of channel resistance (red) and support (green).

The Tale of the Tape: TSLA has formed a common pattern known as a channel, in this case a down channel. A long trade could be entered on a pullback down to the channel support, or on a break through the channel resistance, which is currently sitting near $205. Short opportunities would be on rallies up to channel resistance or on a break of channel support.
Please share this article
at 12:03 AM No comments: Links to this post

ProShares Ultra Nasdaq Biotechnology Fund (BIB): Your Chance to Get in Early on Massive Opportunities in Biotech 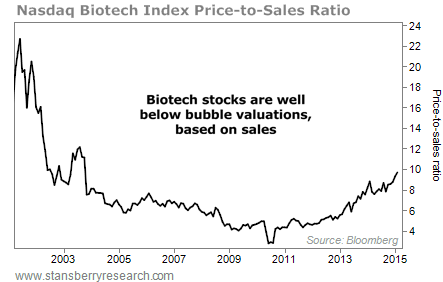 As True Wealth Systems editor Steve Sjuggerud has said many times over the years, "If you catch just one biotech bull market in your lifetime, you may never have to work again..."

And the returns in the ProShares Ultra Nasdaq Biotechnology Fund (BIB) – a double-long exchange-traded fund – supports Steve's statement. (Remember, the returns for BIB will be higher than a simple biotech index due to leverage. But the returns for the normal index are still incredible.)
BIB hit a low of $8.48 per share on August 8, 2011. It has soared to more than $160 today – a return of nearly 20 times in less than four years. (more)
Please share this article
at 12:03 AM No comments: Links to this post