Whenever the word “Coal” comes up in conversation, a reaction of disgust has become the standard. The reasons range from, “It’s dirty” to, “We don’t need it” to, “Obama” (whatever that means)…..But I don’t know anyone who likes this space. Not a single person in fact. I bet I probably grossed some people out with this headline alone.
So as we like to do around here, when no one likes them it’s probably time to look a little bit closer. We’ll focus our attention today on shares of the Market Vectors Coal ETF $KOL. The first thing that stands out to me is the beautiful 5-wave pattern from the 2011 highs down to last year’s lows: 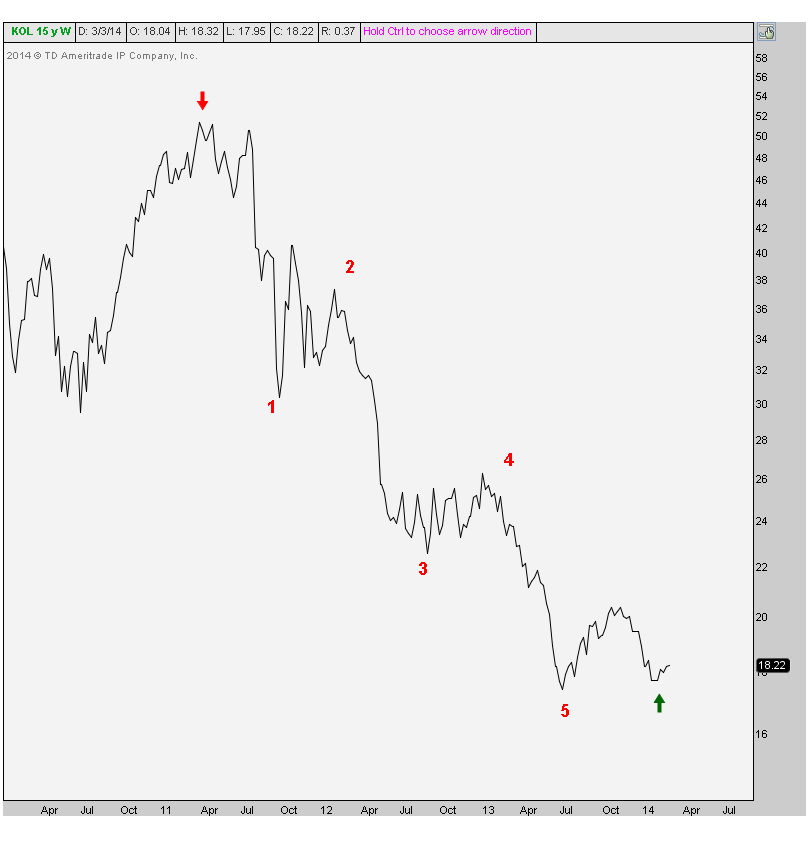 The next thing that sticks out to me is the potential double bottom formation down here near 17.25. This is a weekly candlestick chart. Look how on the second low last month, momentum (measured using a 14-period RSI) was putting in a much higher low. That bullish divergence stands out after a 5-wave decline.  (more)
Please share this article
at 12:05 AM No comments: Links to this post 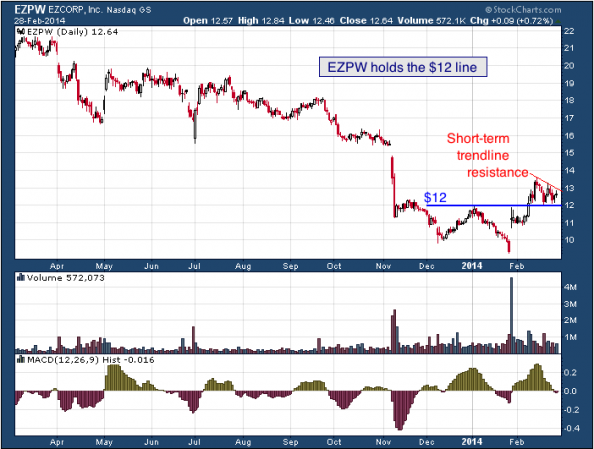 EZPW has formed a key price level at $12.00 (blue) over the last (2) months. You can see how that level has been both a current support and prior resistance. In addition, the stock has created a down trending resistance starting from the middle of February (red). These two lines combined have EZPW stuck trading within a common chart pattern known as a descending triangle (or a pennant). At some point, the stock has to break support or break its string of lower highs.

The Tale of the Tape: EZPW has formed a descending triangle pattern. A short trade could be made on a break of the $12 support level. A breakthrough $13 would break the down trending resistance and would set up a potential long trade.
Please share this article
at 12:04 AM No comments: Links to this post

kingworldnews.com / March 6, 2014
On the heels of another surge in gold and silver, today top Citi analyst Tom Fitzpatrick sent King World News two incredibly important charts which show that gold may now be poised for a staggering $570 surge and also a 44% spike in silver.  Below are the key gold and silver charts that all KWN readers around the world need to see.
Here is what Fitzpatrick had to say: Gold:  “A weekly close above this range (in gold) would open up the way for a test of the pivotal double bottom neckline at $1,434 (see chart below)….
READ MORE
Please share this article
at 12:04 AM No comments: Links to this post

Chart of the Day - Methanex (MEOH) 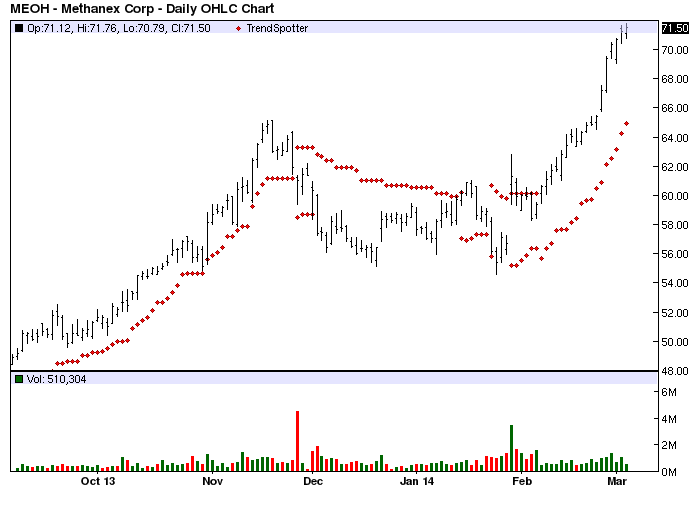 The Chart of the Day is Methanex (MEOH). I found the stock by sorting the All Time High list for frequency of new highs in the last month then eliminated the stocks that did not have positive gains for the last week and month. I then used the Flipchart feature to review the charts. Since the Trend Spotter signaled a buy on 2/7 the stock gained 17.72%.

MEOH is a Vancouver based company engaged in the worldwide production and marketing of methanol. Methanol, made from natural gas, is a basic chemical building block used to manufacture products such as formaldehyde, MTBE, acetic acid and others. The Company operates production facilities in Canada, the United States, New Zealand and Chile. The Company also markets additional methanol from plants in the US, Trinidad and Europe. 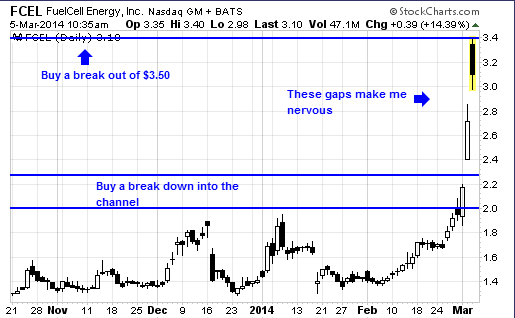 Successful short-term trading is a learnable skill. It takes a combination of a keen eye to identify changing fundamentals within the market or company and the ability to read price. By "reading price," I mean the aptitude to study price changes on a spread sheet or chart in order to make an educated guess as to whether the price trend will continue or reverse.
In addition, the ability to handle losses while not deviating from your trading plan is a key factor in short-term trading success.
Using the above factors as a guide, I identified FuelCell Energy (NASDAQ: FCEL) as a very likely candidate for substantial short-term profits. Let's take a closer look at this innovative company.  (more)

World Wrestling Entertainment, Inc., an integrated media and entertainment company, is engaged in the sports entertainment business worldwide. It operates in four segments: Live and Televised Entertainment, Consumer Products, Digital Media, and WWE Studios. The Live and Televised Entertainment segment produced live events and provides content for its television and other programming; designs, markets, and distributes various WWE-branded products, such as t-shirts, caps, and other novelty items; and offers pay-per-view programs. The Consumer Products segment has a licensing program using its marks and logos, copyrighted works, and characters on various retail products, including toys, video games, apparel, and books; distributes home entertainment DVD/Blu-ray products; and publishes WWE, WWE kids, and several special magazines. The Digital Media segment operates Website, WWE.com; provides advertising services; sells merchandise on its Website at WWEShop Internet storefront; and sells broadband and mobile content. The WWE Studios segment is involved in the production and distribution of filmed entertainment content.
Please take a look at the 6-month chart of WWE (World Wrestling Entertainment, Inc.) below with my added notations: 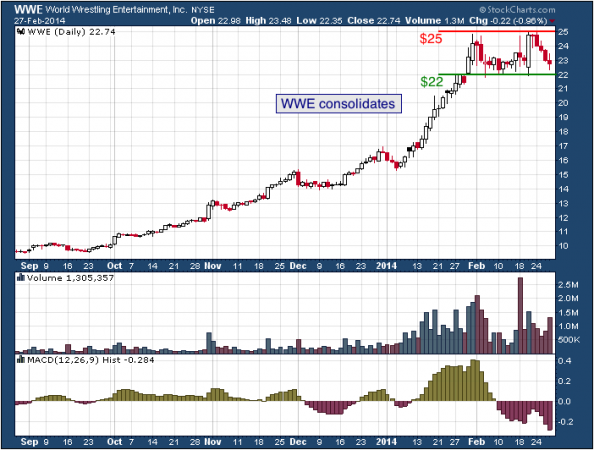 There are two prices in particular that standout on WWE. The first is the 52-week high resistance at $25 (red). The other is the $22 level (green) that has been a key support throughout the entire month of February. The stock appears to be on its way back down to the $22 support, which could provide a bounce higher.

The Tale of the Tape: WWE has key levels of $22 and $25. A long trade could be made at $22, or on a break through $25, with a stop placed below the level of entry. However, if the stock were to break below $22 traders might want to look to get short on the stock.
Please share this article
at 12:02 AM No comments: Links to this post