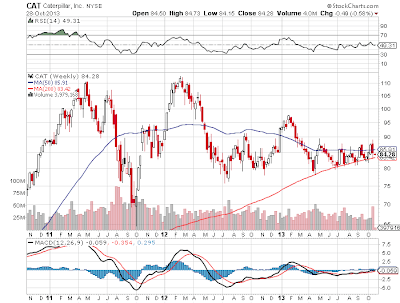 When you think of stalwart mega-cap industrial stocks, Caterpillar (NYSE: CAT) certainly is one that comes to mind. The earth-moving equipment blue chip, Dow component, and long-time bellwether for the global economy, has been a big winner for investors and traders over the years, and for good reason.

During the past decade, there's been a huge infrastructure buildup in the emerging markets of Asia, especially China, and Russia, India and Brazil. The massive demand for heavy-duty construction equipment has made the iconic brand a mainstay on big building projects in nearly every corner of the globe.

Recently, however, demand for Caterpillar's products has waned, and that's caused a marked slowdown in the company's earnings growth, as well as a significant decline in CAT shares. (more) 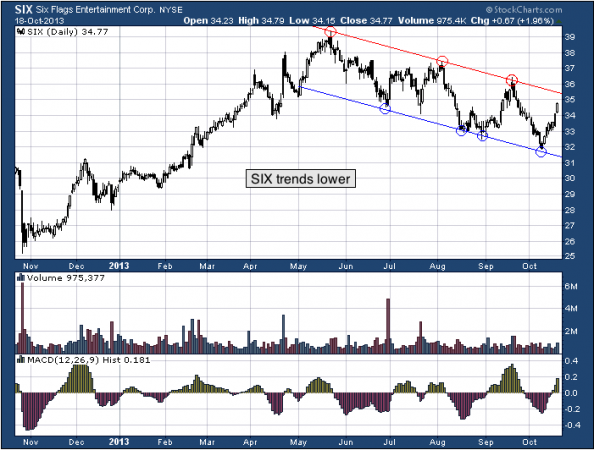 SIX has formed a very clear down-channel chart pattern over the last (6) months. A channel is simply formed through the combination of a trend line support that runs parallel to a trend line resistance. When it comes to channels, remember that any (3) points can start the channel, but a 4th point or more confirms it. You can see that SIX has several points of channel resistance (red) and support (blue). Following the SIX channel can provide you with both long and short trading opportunities.

The Tale of the Tape: SIX has formed a common pattern know as a channel, in this case, a down channel. A long trade can be entered on a pullback to the channel support, which at this point is near $31.50, or on a breakout through the channel resistance, currently sitting near $35. Short trades could also be placed at channel resistance or if SIX were to break below the channel support.
Please share this article
at 12:05 AM No comments: Links to this post

Historic End Game – “A Collapse To End All Collapses”

The West is headed into a historic collapse, and we have all of this misinformation in the mainstream media which is designed to fool people. We are in the middle of the biggest financial bubble in the history of mankind. The Fed and the Bank of Japan are combining for over $150 billion of QE each month. Mario Draghi, head of the ECB has already come out and said they will backstop all European debt.
The Chinese are reigniting their bubble because they saw the pain that was created by even the slightest tapering in their monetary stimulus. So, the fact that the mainstream media claims nothing really bad has happened so far is only testimony to the fact that they are throwing all caution to the wind and pumping all the money they can into the system because we are now in a historic end game. We are either going to have a collapse to end all collapses, or we are going to have hyperinflation.
John Embry continues @ KingWorldNews.com

American economist Robert Shiller may be a winner of the 2013 Nobel Prize in economic sciences for his research into market prices and asset bubbles, but when The Daily Ticker caught up with him, he wasn’t particularly concerned about current market prices or asset bubbles.
So what keeps the Yale professor and S&P/Case-Shiller Home Price Index co-founder up at night?
“The world economy is softening a bit,” he tells us in the accompanying interview. “There’s always a chance of another recession. It’s been six years since the last recession started – they tend to come along with some regularity. Congress is now unable to get things done, and so we won’t have a good response if there’s another recession.”
Continue Reading at Finance.Yahoo.com…
Please share this article
at 12:04 AM No comments: Links to this post

CalAmp (NASDAQ: CAMP): This Triple-Digit Gainer Could Surge Another 85%

Despite the phenomenal gains of the past month, the performance of the S&P seems almost tepid compared to wireless communications provider, CalAmp (NASDAQ: CAMP). The company, which develops wireless datacom and satellite communications solutions, is up almost 40% so far this month. Even more impressive, shares have increased more than 190% year to date, surging from around $8 at the end of 2012 to their current level above $24.

The stock's enormous returns have been fueled by eye-popping revenue gains. In its recently reported fiscal 2014 second-quarter results, the company posted a 38% year-over-year revenue increase in its wireless datacom segment. This increase was driven largely by the company's mobile resource management products, including its stolen vehicle recovery system and GPS-enabled fleet management devices. Growth was also seen in the company's wireless network division, which enables everything from automating electricity distribution to facilitating communication among emergency vehicles.  (more)