Richard Suttmeier: Stocks Will Fall Another 20% from Here

This week, Richard Suttmeier, chief market strategist for ValuEngine.com joins S&A Investor Radio to put the markets into perspective...
For the past five years, Richard has been predicting a pullback... and now that it has finally happened, he is here to share his market analysis.
Find out why Rich is predicting stocks will fall at least 20% from current levels. You'll also hear him break down key technical indicators investors should be watching.
Even promising small-cap companies with solid fundamentals, strong management teams, and huge growth potential are getting crushed.
Markets do not go up forever. That's why it's critical to protect your capital and limit your losses during extreme volatile times. (more)
Please share this article
at 12:04 AM No comments: Links to this post

For the last 3 years, European Brent has mostly traded in a range of $100-$120 with West Texas intermediate selling at a $5 to $20 discount. But in September Brent started moving below $100 and now stands at $90 a barrel, and the spread over U.S. domestic crude has narrowed. Here I take a look at some of the factors behind these developments.

Price of Brent minus WTI, Jan 4 2005 to Oct 6 2014.
Prices of many other industrial commodities have also declined over the last year, silver and iron ore more than oil. One factor has been weakness in Europe and Japan, which means lower demand for commodities as well as a strengthening dollar. The decline over the last year in the price of oil when paid for with Japanese yen is only about half the size of the decline in the dollar price.  (more)
Please share this article
at 12:04 AM No comments: Links to this post

While everyone is worried about the invisible line that is the 200 day moving average (see here), today the S&P500 is actually breaking real levels. Last week the S&P broke below the uptrend line from the important 2011 lows. I remember those lows like it was yesterday, and we’ve broken that uptrend. But today we are now below the uptrend line from 2009 for the first time.
Here we’re looking at a logarithmic daily bar chart of the S&P500. We pointed to the beautiful failed breakout over 2 weeks ago and we are seeing the result. This is as text books as it gets, which is why on the Wall Street Journal I suggested selling. Guys, this is why we watch out for these types of moves, because the best trades come from them. How nice is this sell-off? 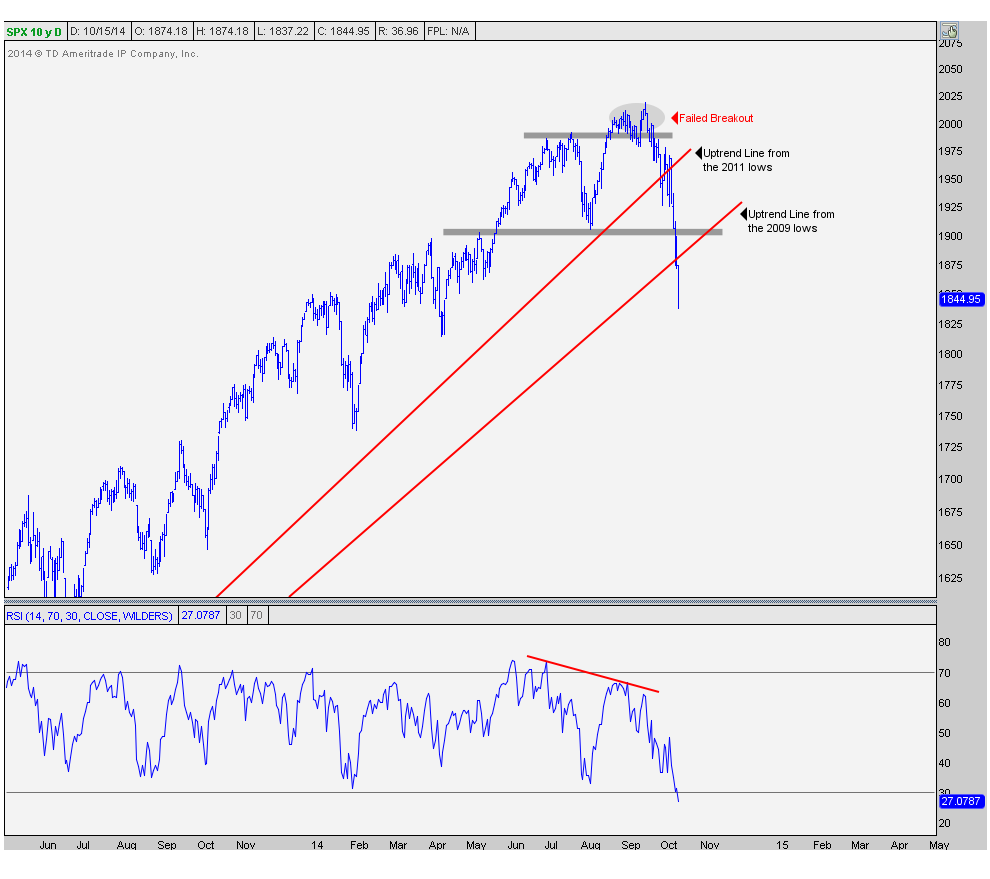 Meanwhile, we also had a bearish divergence in momentum as seen on this chart. All of this said to get out of the way. But here’s the problem. Things have actually gotten worse. Let me explain.
Although momentum had put in a bearish divergence, there was a possibility that it could work itself off through time rather than through price. We’ve seen the S&P do this before over the last few years, which is healthy. But now that we are hitting oversold conditions in our 14-day RSI, momentum is officially in a bearish range for the first time since 2012. This is not good from a structural perspective. Markets in uptrends do not get oversold. They are strong enough to correct without reaching those conditions. This one clearly isn’t.
Moving on, we also broke 2 major uptrends within a very short period of time. This occurred simultaneously as we broke key support from the August lows. You know what this means right? We now have a series of, “Lower highs and lower lows”. Do you know what we call that? A downtrend.
Take all of this price action with what we’re seeing from an intermarket perspective, and the conclusion is to take any strength to sell into it. See Junk vs Treasury Bond ratio and Discretionary vs Staples Ratio.
I think best case scenario we only go down another 200 points in the S&P500.
Please share this article
at 12:03 AM No comments: Links to this post

TD Ameritrade (NYSE: AMTD) Watch This Broker's Chart Like a Hawk for a 'Buy' Signal

No doubt, the stock market has been challenging in the past few weeks. Although it started to back down from all-time highs in September, the pace accelerated to a near panic in October, sending all major indices below important trendlines and moving averages.
Most stocks sank with the market, yet some were in rather good shape technically before the stampede commenced. TD Ameritrade (NYSE: AMTD) is one stock that seemed to get pulled down much further than its chart suggested it should.
While it's true that in chart analysis, whatever the stock does on the charts is exactly what the market intended, some indicators have already dropped to excessive levels.

Stochastics, for example, which measures a stock's placement in its recent range to find overbought and oversold conditions, is now quite oversold. In fact, it is reading in the single digits. The commonly used parameters of a 14-period range with three-period smoothing returned a reading of four in a scale of zero to 100. Anything below 20 is considered oversold, so this is indeed extreme. (more)
Please share this article
at 12:03 AM No comments: Links to this post 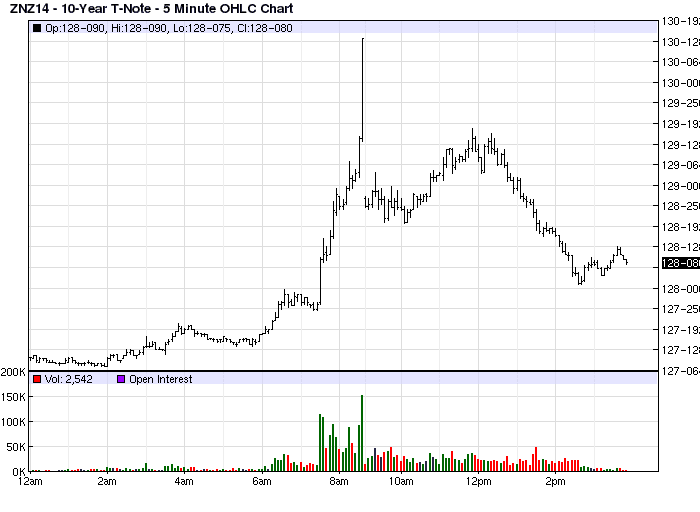 Treasuries surged, with benchmark 10-year yields falling the most since March 2009, as a decline in retail sales prompted traders to reduce wagers the Federal Reserve will raise interest rates in 2015.
U.S. debt pared gains as stocks trimmed losses after Bloomberg News reported Fed Chair Janet Yellen voiced confidence in the durability of the U.S. economic expansion during a closed-door meeting last weekend. Futures show traders betting that the Fed will raise interest rates in December 2015, with chances of an increase in September fading to 37 percent. The benchmark 10-year yield traded below 2 percent for the first time since June 2013 even as the Fed is forecast to end its quantitative easing this month. (more)