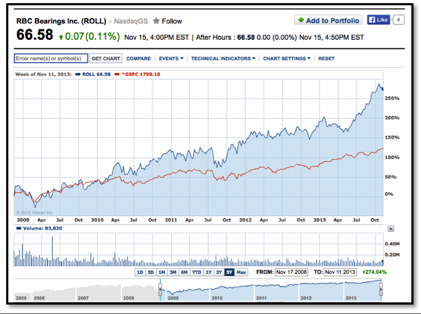 Last weekend Boeing (BA) sold $85 billion worth of its new 777x aircraft in one day. Boeing shares are at an all-time high, taking off at a remarkably steep angle. It's not just jet engines. If you break down the supply line of a jet to the most basic part, the humble ball bearing, you see an industrial and consumer consumption pattern that's being widely overlooked.
It's part of a trend. Scared by endless talk of bubbles in tech, investors are missing the fact that record highs for the S&P500 (^GSPC) are being pushed by old-school companies selling big ticket goods. The entire product food chain from ball-bearings in the guts of a motor to the end market sellers show a strong fundamental economy.

Forget gold... This is world's most powerful inflation protection

What I'm about to say might anger you...
But if you're holding gold as your only hedge against inflation... you're likely making a big mistake.
Many folks believe this common "myth" about gold: As the price of everyday goods we buy rises, the price of gold will increase in lockstep.
It makes some intuitive sense. But in reality, it doesn't work that way... And there's a MUCH BETTER inflation hedge out there...
Take a look at the chart below. The black line is the price of gold... The gray line shows increases in the Consumer Price Index (CPI). It's the government's measure of inflation. And no, it's not perfect. But it does show that prices increased from 1987 to 2004.
You can see that during 17 years of inflation, as consumer prices were increasing, gold prices went nowhere. 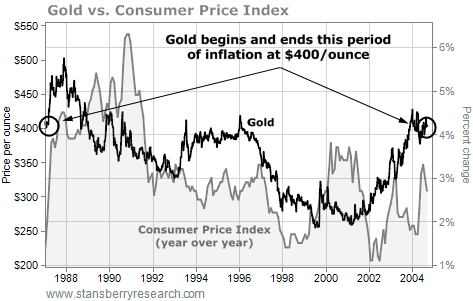 Over my investing lifetime, the only great time to own gold has been when real returns on fixed-income securities turned negative... For example, when inflation has been more than interest rates on U.S. Treasurys, gold has been a great asset to own.  (more)
Please share this article
at 12:04 AM No comments:

NAHB sentiment dropped to its lowest since June (after hitting 8-year highs just 3 months ago). This is the 3rd miss in a row as a huge rebound in prospective buyer traffic (read hope) in the NorthEast seemed to save the data from a fate worse than death. The prior print was revised down from 57 to 54 as it appears for the 3rd time in 20 years, the exuberance in realtor confidence is shown to be a false flag…
READ MORE
Please share this article
at 12:04 AM No comments: 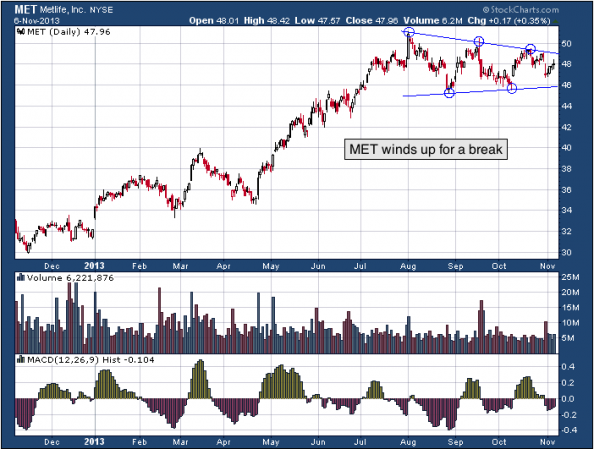 For the last 3 months MET has been forming a simple chart pattern known as a symmetrical triangle. Combining a down trending resistance with an up trending support forms the triangle pattern. As the support and resistance converge on each other the pattern is created. Since there is no true way to know which way the stock will break, most traders will wait for the breakout or breakdown before entering a trade.

The Tale of the Tape: MET is stuck within a symmetrical triangle. A break through resistance should mean higher prices for a long trade, while a break below support would be a great opportunity to enter a short position.
Please share this article
at 12:04 AM No comments:

A couple weeks ago I posted these same charts talking about the pending breakout (in either direction) with silver, gold and mining stocks. Fast forwarding to this week its clear this sector continues its struggle to rally. Key support levels are now being tested and if these levels fail prepare for a sharp correction with mining stocks showing the most downside potential of roughly 25% for the GDX ETF trading fund.
Let’s take a quick look at what is going on.
Gold Trading Chart:
The chart of gold shows price being wedge into the apex of the down sloping resistance trend line and the rising support trendline. Gold was trading below this level but has since bounced. But if gold closes the week below this line in the sand the price could start to fall quickly and test the $1200 per ounce within a week or two.

Silver Trading Chart:
Silver is under performing gold and trading below its support level currently. If silver does not recover by Friday’s closing bell then things could get ugly for a few weeks as investors start to exit their positions. That being said, I need to point out that silver is more of a wild card when using trend lines like this. Both gold and gold miners should be confirming this breakdown in silver if it is the real deal.

Gold Mining Stocks ETF:
The chart of gold miners I like the most. I like it because it’s pointing to lower prices, roughly 25% lower if the breakdown takes place. Gold mining stocks could be a fantastic long term investment if we see the $17.50 level reached on this GDX etf.

Last week I talked about ETF trading strategies and the big picture on gold, silver, miners and bonds. They look to be nearing a major bottom and once they do bottom it should be a great buying opportunity for specific stocks or the entire sector.
The next few weeks are going to be crucial for precious metals and we will keep an eye on them as this bottom unfolds.Please share this article
at 12:03 AM 1 comment:

The Dow Jones industrial average crossed 16,000 for the first time and the Standard & Poor's 500 index rose past 1,800 shortly after the market opened.

Within the next half-hour, though, both indexes had slipped below those levels.

Stocks have been rising sharply this year as the U.S. economy improves, companies report bigger profits and the Federal Reserve keeps up its easy-money policies.

The S&P 500 index has risen for six weeks straight and is up 26 percent so far this year. The market hasn't risen that much in a whole year since 2003.

Tyson Foods jumped $1.10, or 3.8 percent, to $29.86, the most in the S&P 500 index. The food company said its net income surged 41 percent in the latest quarter on higher sales of beef and chicken. The company raised its dividend 50 percent.