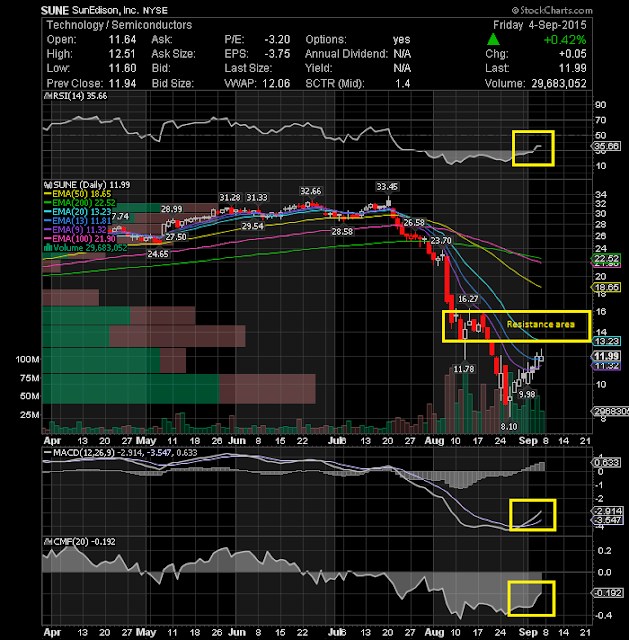 Sunedison Inc (NYSE:SUNE) On a daily basis the stock price has moved out of oversold territory and the bounce is gaining momentum for a run up to $13.23, where its 20-day EMA is poised and also some previous price support levels. All technicals are pointing in a positive direction. The MACD and CMF are gaining momentum although in negative area. The stock is likely to make more gains in the coming week. 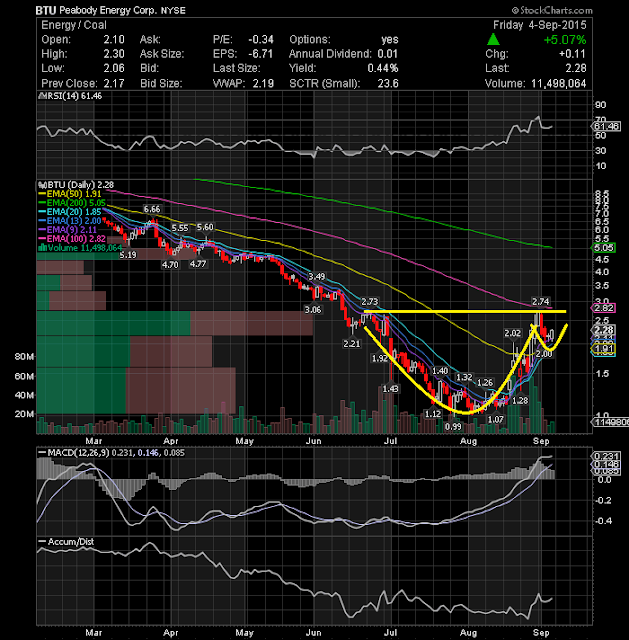 Peabody Energy Corporation (NYSE:BTU) is forming a potential cup with handle bottom pattern (bullish formation) with a neckline at 2.74. The stock has found support on its 9-day EMA over the last couple of days and a bullish candle was added on Friday after a healthy pullback. In addition, we saw bullish options activity with buyers of the Dec 4 calls. Keep this stock on your watch list on Tuesday. 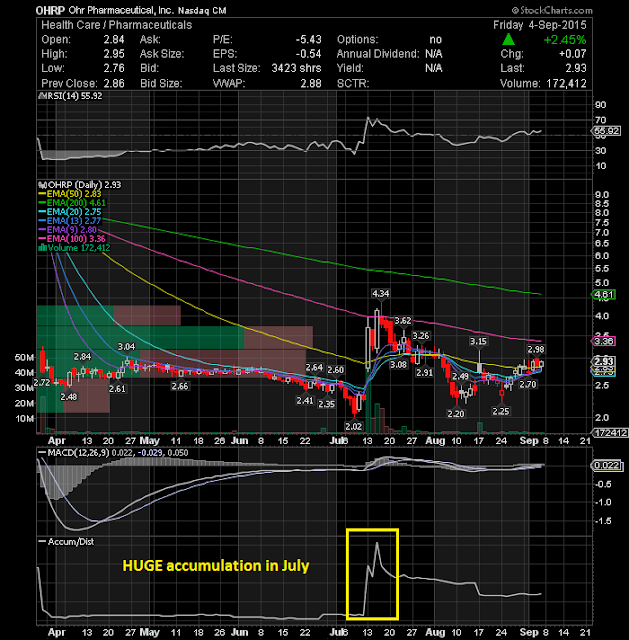 OHR Pharmaceutical Inc (NASDAQ:OHRP) after consolidating during the past week the stock closed on last Friday near the top of the range with moderate volumes gaining about 2.50%, indicating accumulation of the stock at current levels. It appears to be ready to make a significant move higher. 2.98 is the level to watch for a breakout. Keep it on your radar screen because the technical chart looks very bullish to me and looks in the verge of a breakout. Analysts are also very positive on the stock. Check this out: Analysts Bullish on OHR Pharma Amid Positive Study 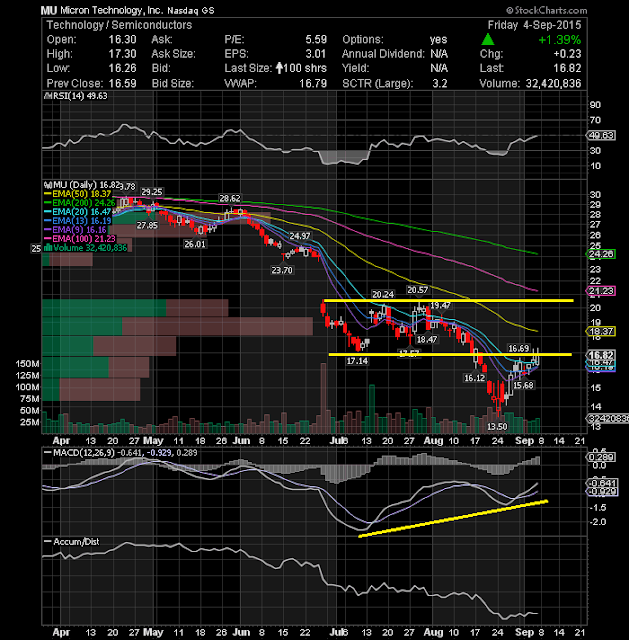 Micron Technology, Inc. (NASDAQ:MU) attempted to close above the $17 level on Friday but did not succeed. A breakout from this short-term sideways zone will give an excellent opportunity for traders to pick up long positions. Considering the strong momentum over the past week, I think the stock looks set to break higher. Keep this stock in your radar list.

Juno Therapeutics Inc (NASDAQ:JUNO) closed the day on Friday gaining nearly 3% on solid volume. The stock has started to bounce and seems to be ready for a run up. Some technicals are turning up here and the MACD finally triggered the buy signal indicating that an upward cycle has begun. Further strength above 37.7 opens the door to 40. Put her on your radar. 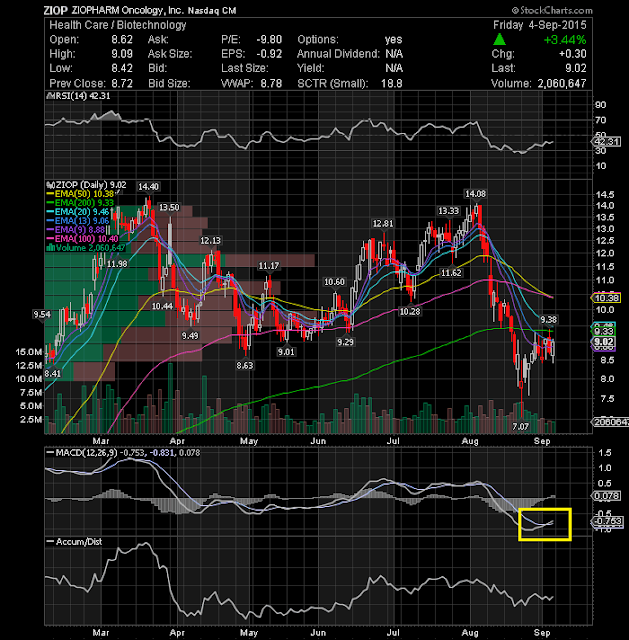 ZIOPHARM Oncology Inc. (NASDAQ:ZIOP) had a nice rebound recently and has been consolidating here. The stock is displaying upside momentum again and is poised to move higher from these levels IMHO. Nearest resistance is at $9.33 (200EMA). If this key level is crossed and the stock is able to sustain above this level, then it might go to $10 in short-term. On the technical side, MACD gave a buy signal and RSI has been ticking higher. There could be good upside in this trade, so watch the stock closely next week. Stop 8.40 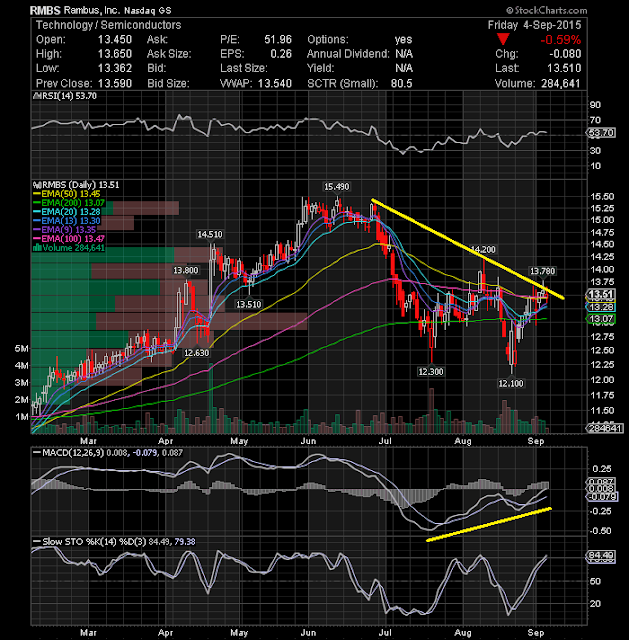 Rambus Inc. (NASDAQ:RMBS) is slowly recovering. The $14 area is a critical resistance region that can determine overall bias for the stock in medium-term. A move above this key level would confirm the breakout (DT line), with an initial target of 14.75 and secondary target of 15.50. Stop is at 12.82 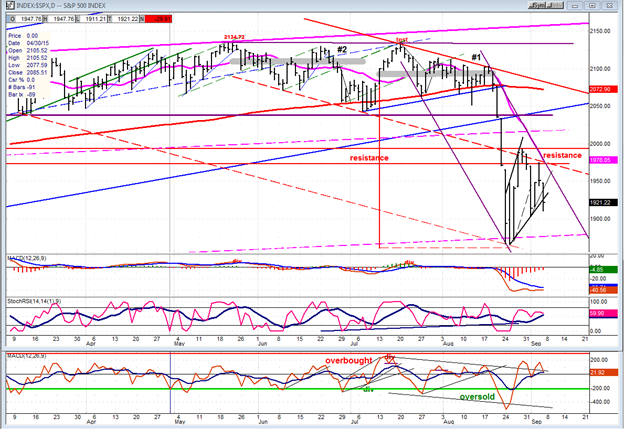 SPX: Long-Term Trend - Bull Market?
Intermediate Trend – SPX has started an intermediate correction (at least).
Analysis of the short-term trend is done on a daily basis with the help of hourly charts. It is an important adjunct to the analysis of daily and weekly charts, which discusses the course of longer market trends.
MORE SELLING AHEAD
Market Overview
Last week ended the rally after it had a typical 50% retracement of its initial decline.  By Friday, on the bar chart, the index was trying to hold on to support created by a critical short-term trend line which had already been violated.  On the P&F chart, that trend line did hold and it created a tepid bounce after being touched.  (more)
at 12:03 AM No comments: Links to this post

Puma Biotechnology, Inc., a development stage biopharmaceutical company, focuses on the acquisition, development, and commercialization of products for the treatment of various forms of cancer. Its drug candidates include PB272 (neratinib (oral)) for the treatment of advanced breast cancer patients, non-small cell lung cancer patients, and patients with HER2 mutation-positive solid tumors; and PB272 (neratinib (intravenous)) for the treatment of advanced cancer patients. The company is also developing PB357, an orally administered agent that is an irreversible tyrosine kinase inhibitor that blocks signal transduction through the epidermal growth factor receptors, HER1, HER2, and HER4. It has a license agreement with Pfizer, Inc. for the development, manufacture, and commercialization of neratinib (oral), neratinib (intravenous), PB357, and related compounds.

Take a look at the 1-year chart of Puma (NYSE: PBYI) below with added notations: 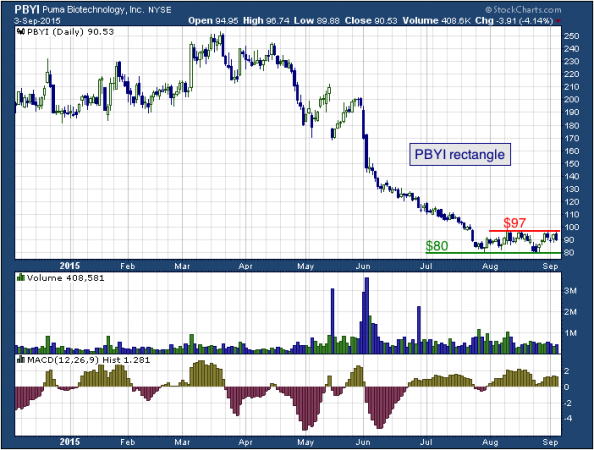 After its big drop in June and July, PBYI started trading sideways over the next month. While in that sideways move, the stock has formed a common pattern known as a rectangle. A minimum of (2) successful tests of the support and (2) successful tests of the resistance will give you the pattern.
PBYI’s rectangle pattern has formed a resistance at $97 (red), and an $80 support (green). At some point the stock will have to break one of the two levels.

The Tale of the Tape: PBYI is trading within a rectangle pattern. The possible long positions on the stock would be either on a pullback to $80 or on a breakout above $97. The ideal short opportunity would be on a break below $80.
at 12:03 AM No comments: Links to this post