Well, according to the National Retail Federation, Black Friday retail sales numbers stunk to high heaven.
Six million fewer Americans hit the stores, and spending dropped 11% over last year. Since Thanksgiving, consumers spent $50.9 billion on stuff they may or may not need. That was down from $57.4 billion last year.
Online sales, meanwhile, were up 15% to $22.7 billion.
What's going on? More people have jobs, and lower gas prices have put more coin in our pockets. And with the savings rate around 5%, we have the loot. So why aren't we spending it?  (more)

About this week’s show:
-Saudi’s throw down to bust U.S. energy suppliers
-The Dutch move 122 tons of gold out of U.S.
-Sovereign banks now grabbing their gold back

Canadian Solar Inc., together with its subsidiaries, designs, develops, manufactures, and sells solar wafers, cells, and solar module products worldwide. The company operates in two segments, Module and Project. Its products include various solar modules that are used in residential, commercial, and industrial solar power generation systems. The company also provides specialty solar modules and products consisting of Andes Solar Home System, an off-grid solar system, designed to provide an economical source of electricity to homes and communities without access to grid; and Maple Solar System, a clean energy solution for families, as well as sells solar system kits, which are a ready-to-install packages comprising third party supplied components, such as inverters, racking system, and other accessories.
Take a look at the 1-year chart of Canadian (Nasdaq: CSIQ) below with my added notations: 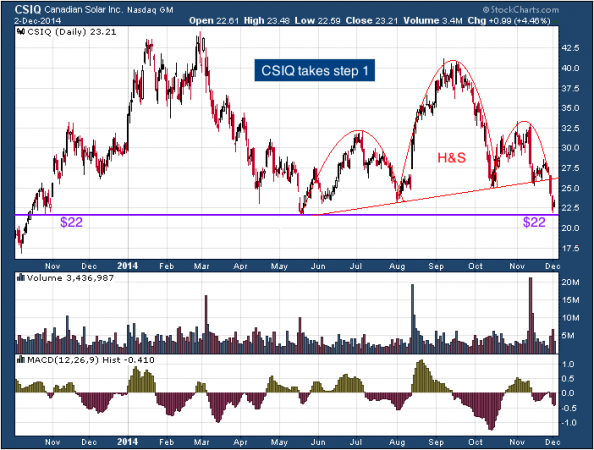 Over the last 6 months CSIQ created a key trendline of support (red) and that line was also the “neckline” support for the stock’s head and shoulders (H&S) reversal pattern. Above the neckline you will notice the H&S pattern itself (red). Confirmation of the H&S occurred when CSIQ broke below its trendline support.
Next up is the key support level at $22 (purple), which was just tested earlier this week. CSIQ could get a bounce off of that level, but a break of $22 should lead to lower prices.

The Tale of the Tape: CSIQ has confirmed a head & shoulders pattern and is now at the key level of $22. A long trade could be made at $22 with a stop placed below that level, but ideally a short trade could be entered on a break below $22 instead.
Please share this article
at 12:03 AM No comments: Links to this post

This sector is a 'massive buying opportunity'

Oil isn’t falling by itself – it’s taking the whole energy sector with it.
In fact, energy is the only S&P 500 sector down on the year. It has lost 8.5 percent year-to-date and is off19 percent from its 52-week highs. This happened as the price of a barrel of U.S. crude oil dropped from $107 to $67 in under six months.
Yet some on Wall Street aren’t down on the sector’s prospects.
“I’m a massive buyer here,” said David Seaburg, head of sales trading at Cowen and Company. “At these levels, I think it’s an absolute buying opportunity.”  (more)

Why Nuclear Energy Stocks Will Soar in 2015

You don’t have to be a rocket scientist to have seen some upward trends in the nuclear industry lately.

There are several key indicators that point in a bullish direction on nuclear stocks, and all are worth examining before adding any uranium-themed investments to your portfolio.
No doubt the global nuclear energy market is growing. So-called “green” alternatives like wind and solar haven’t made much of a dent in the world’s energy bourses, and that’s where nuclear enters the picture.  (more)
Please share this article
at 12:03 AM No comments: Links to this post