Emerging markets missed out on the equities rally in 2013, and EM stocks are beginning to look cheap. John Authers analyses whether this value can be realised, as there are risks from weak Chinese growth, falling commodity prices and the Fed's exit from QE
Please share this article
at 12:05 AM No comments: Links to this post

Apple (AAPL) could be one of the most controversial stocks ever. It seems that half of the analysts say "BUY AAPL", while the other half says "SELL AAPL".

So what is the right thing to do?


Should You Buy AAPL - Or Sell It?
And if you currently own AAPL in your portfolio, should you hold or get rid of it?

With the NASDAQ up 38% for the year, AAPL was a 2013 disappointment, clearly underperforming the broad market with only a 5% return in 2013. In fact, it took until the last week of November for AAPL to finally move into positive territory for the year.


So Where Does AAPL Go From Here?
On January 2nd, 2014, Wells Fargo analyst Maynard Um downgraded Apple from "Outperform" to "Market Perform", and assigns a valuation range of $536-$581.
The very same day Brian White of Cantor Fitzgerald Equity Research believes the rally will continue. He is calling Apple the "top large-cap pick" for 2014 and says the tech giant will excite investors this year.

So the "talking heads" don't give us any guidance - no surprise!
Let's take a look at the chart:

Using the Power Crossover Method we have 2 indicators that have crossed bearish twice in the last 3 trading sessions. If we see a confirmed sell signal after the 3rd indicator crosses, AAPL could be on its way down.


Don't Dump AAPL - Yet
There is an interesting support/resistance level lingering around the $539 mark. On 10/29/13 traders rejected new highs at the time, trading as high as $539.25. This high wasn't touched again for another month before finally moving higher and breaking into positive territory for the year.

After the last Power Crossover uptrend, AAPL kissed this resistance level on the way down (what was resistance becomes support), trading as low as $538.80 on 12/18/13 before attempting another push higher. $539 could be the line in the sand between bulls and bears and is a support/resistance level to watch.

Right now we are waiting for Stochastics to cross before considering a SHORT or better yet, buy AAPL puts.

Once the Power Crossover Short Signal occurs and we break $539, AAPL could make its way down to $500 without much effort. If we see a convincing break below $500, we could see a move to $450 or even $400 again.
Please share this article
at 12:05 AM No comments: Links to this post 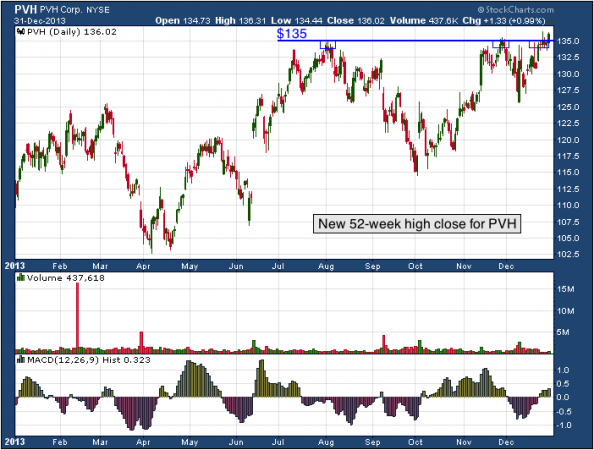 After having a rough summer, PHV rebounded nicely throughout the fall. Over that period of time, the stock had also created a strong level of resistance at $135 (blue), which constituted a 52-week high resistance. A break through that level would most likely mean higher prices for the stock. As you can see from the chart, PVH finally broke higher earlier this week.

The Tale of the Tape: PVH broke out to a new 52-week high. A long trade could be made at $135 with a stop placed below that level. A break back below $135 would negate the forecast for a continued move higher.
Please share this article
at 12:03 AM No comments: Links to this post

Will Stocks continue to climb in 2014?

Will Stocks continue to climb in 2014 Or are signs pointing to a slowdown ahead ?
Please share this article
at 12:03 AM No comments: Links to this post

During my latest appearance on CNBC’s Stock Brawl on Monday, I railed against the practice of buying overvalued stocks and hoping they’ll one day grow into their valuations.
That’s a fool’s game. Especially five years into a rip-roaring bull market.
Instead of overpaying, we should (always) be on the hunt for undervalued names with solid growth prospects.
After all, as Warren Buffett famously said, “Price is what you pay; value is what you get.”
Granted, that’s easier said than done presently, given that roughly 90% of stocks in the S&P 500 Index rallied last year.
But it’s not impossible. Because, believe it or not, the most compelling bargains right now can be found by digging through other investors’ trash piles.
I shared earlier this week that the end of a historic year for stocks prompted a spat of indiscriminate selling in an effort to harvest tax losses, setting the stage for a strong bounce back in the weeks ahead.
And as I promised then, here are six tax-loss treasures worth adding to your portfolio right away…
Tax-Loss Buying Opportunity #1: JDS Uniphase Corp. (JDSU)
JDS Uniphase, a $3-billion market cap company, is one of only 48 stocks in the S&P 500 to fall in price in 2013. Most of the bleeding came during the fourth quarter, too, thanks to a weak quarterly report.
However, the leading provider of communications test and measurement solutions appears to be on the brink of reporting a strong quarter.  (more)
Please share this article
at 12:03 AM No comments: Links to this post