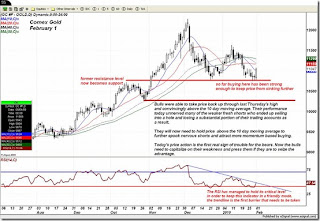 The Ultimate Bubble and the Mother of All Carry Trades

Among the many opinions expressed by billionaire investor George Soros over the course of the 2010 World Economic Forum in Davos, Switzerland was his statement on January 28 in an interview with Maria Bartiromo, host of CNBC's Closing Bell, that "When interest rates are low we have conditions for asset bubbles to develop, and they are developing at the moment. The ultimate asset bubble is gold." New York spot gold closed at $1085.40 down $1.80, but the price of gold is not as much about gold as it is about the value of currencies, particularly the US dollar. (more)
at 3:40 AM No comments: Links to this post

US consumer spending weaker than expected

Personal incomes increased twice as much, at a pace of 0.4%, the Commerce Department reported, as consumers kept their wallets shut in the face of rising job insecurity and worries about the strength of recovery from a severe recession.

The increase in spending during the year-end Christmas shopping season was the smallest since September, according to the seasonally adjusted Commerce Department data, and followed an upwardly revised 0.7% rise in November. Most analysts had forecast a 0.3% rise in both spending and incomes. (more)

Paulson accuses Russia of plotting to disrupt US economy

Wells Fargo & Co., unlike its three biggest competitors, is so convinced interest rates will rise that it sacrificed as much as $1 billion last year cutting back on fixed-income investments.

By scaling back on the so-called carry trade, in which banks borrow in overnight lending markets at rates near zero and invest in higher-yielding securities, San Francisco-based Wells Fargo aims to protect against losses when rates rise. The three other lenders increased investments on the theory that profit will outpace any future losses. (more) 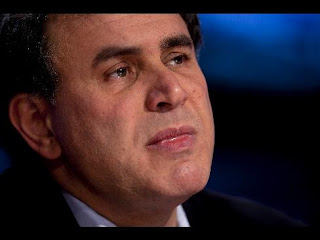 Speaking at the World Economic Forum’s annual meeting in Davos, Switzerland, after the U.S. reported the fastest growth in six years, their comments underscored concern that that emergency measures to rescue banks and fight the recession may be withdrawn too soon.

“The headline number will look large and big, but actually when you dissect it, it’s very dismal and poor,” Roubini said in a Jan. 30 Bloomberg Television interview following a U.S. Commerce Department report that showed economic expansion of 5.7 percent in the fourth quarter. “I think we are in trouble.” (more) 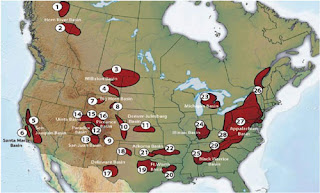 “Until just three years ago,” Byron King reports, “the Marcellus was an obscure name for an obscure rock formation in the backwaters of geological research. Not anymore…

“The tipping point came when Penn State professor Terry Engelder demonstrated that the Marcellus holds as much as 500 trillion cubic feet of natural gas -- the equivalent of total U.S. gas consumption for 25 years. There’s over a trillion dollars’ worth of gas down there -- probably much more. Even if the estimate is off by 50% or so (and that 500 trillion cubic foot number might be on the LOW side), Marcellus is a very big resource.

“Here’s a map showing all of the major shale gas-bearing basins in the U.S. and Canada. The Marcellus is labeled No. 27 -- and I don’t mean in terms of size. As you can see, the Marcellus dwarfs all the others.”

“It’s about time we found a lot of natural gas that’s near a major market,” our friend Rick Rule commented on the find. The Marcellus area is right next to some of the most important natural gas markets in the world. Really, can you get much closer to New England, or the Eastern Seaboard, or the industrial Midwest of the U.S.?

“With news of the gigantic Marcellus resource,” Byron says, “the big players are coming to town. They’re leasing acreage, setting up shop, moving equipment and getting ready for the long haul. Drilling the Marcellus will require much deeper wells. The wells will be expensive, and sophisticated -- filled with modern down-hole technology. This is a 50-year operation, and probably more.”