Get Ready to Buy Brazil: EWZ

In June, I told you to bet against the Brazilian stock market.
Brazil's stock market was up 20% in just three months and within striking distance of an all-time high. Everyone seemed to think the rally would continue.
But as I showed, there was "negative divergence" on the chart. Although the benchmark Brazilian Bovespa Stock Index was making higher highs, its momentum indicators were making lower highs. Negative divergence is a strong warning sign a rally is coming to an end. So Brazil was an ideal short-sale trade.
After my essay, Brazil's stock market did rally for a couple more months – hitting a new high in August. Since then, though, the negative divergence has taken its toll...
Take a look at this chart of Brazilian stock fund EWZ... 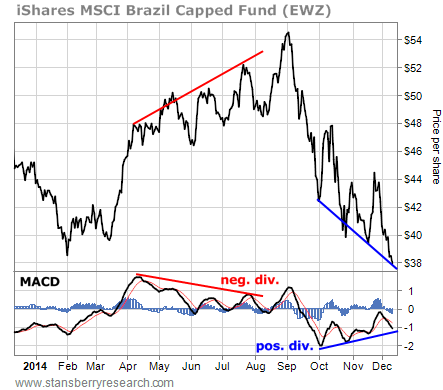 EWZ is now trading 21% below where it was back in June. It's 30% below its late-August high.  (more)
Please share this article
at 12:04 AM No comments: Links to this post


Marc Faber says developed world children will be the first generation in 200 years to have a lower standard of living than their parents. But he is optimistic about emerging markets.

Kansas City Southern, through its subsidiaries, engages in the freight rail transportation business. The company operates north/south rail route between Kansas City, Missouri, and various ports along the Gulf of Mexico in Alabama, Louisiana, Mississippi, and Texas in the midwest and southeast regions of the United States. It also operates direct rail passageway between Mexico City and Laredo, Texas serving various Mexico’s industrial cities and 3 of its seaports; a 157-mile rail line extending from Laredo, Texas to the port city of Corpus Christi, Texas; and KCSR rail line between Meridian, Mississippi and Shreveport, Louisiana, as well as owns the northern half of the rail bridge at Laredo, Texas.
Take a look at the 1-year chart of Kansas City (NYSE: KSU) below with my added notations: 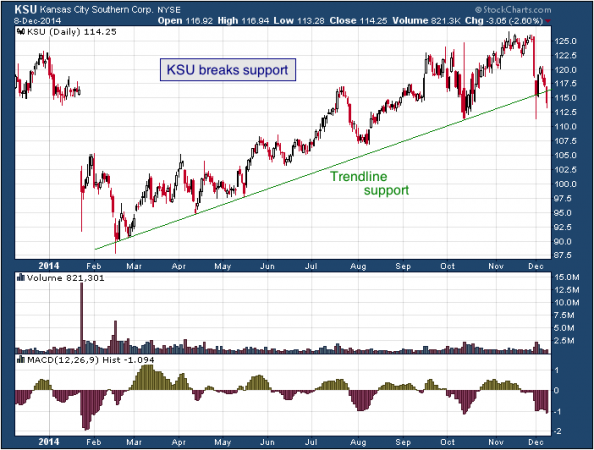 Over the last 10 months KSU has consistently moved higher. During that time the stock had also formed a nice trend line of support (green). Always remember that any (2) points can start a trend line, but it’s the 3rd test and beyond that confirm its importance. So, you can see that KSU’s trendline is very important. Yesterday the stock broke the support.

The major decline in oil prices over the past five months has placed many securities into a freefall. The commodity-rich SPX/TSX, for example, has fallen 10.00% since September, putting into a bear market (Chart 1). 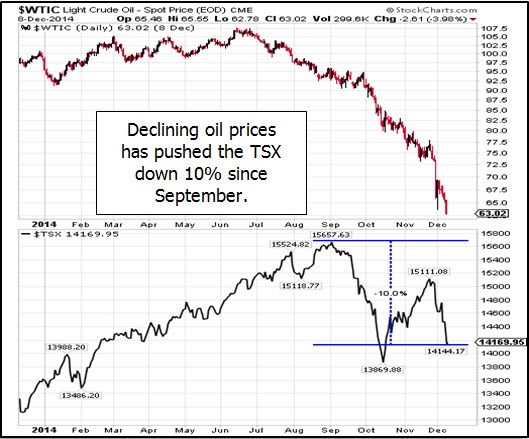 The TSX Energy sector has declined even further, cratering almost 40% bringing on the expectation that a sharp rebound from this group is imminent (Chart 2).  However, the majority of energy stocks on the TSX are not displaying the typical ‘rebound’ characteristics. They are still in a pattern of lower highs and lower lows (downtrend trend).  Nevertheless, there are a few stocks that are leading the sector and appear to stabilize or recover. (more) 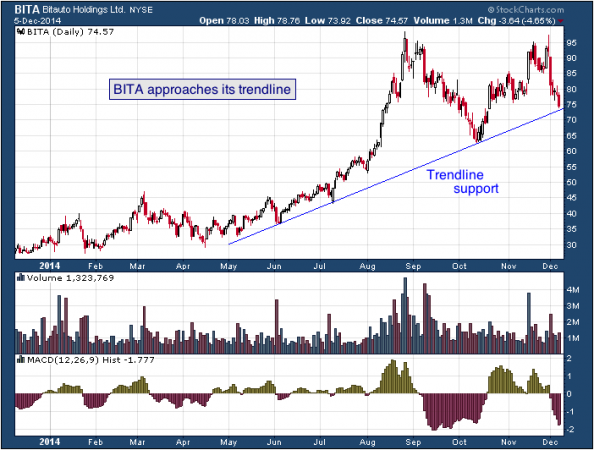 BITA has been moving higher throughout most of 2014. However, the majority of the stock’s run has come over the most recent 6-7 months. During that time, the stock has formed a trendline of support (blue) that it has been bouncing on top of.
Always remember that any (2) points can start a trendline, but it’s the 3rd test and beyond that confirm its importance. BITA’s trendline seems to be important now that it has been tested 3 separate times.

The Tale of the Tape: BITA has created a 6-month trendline of support. A long position could be entered on a pullback to that trendline, which is currently sitting right around $75, with a stop placed below that level. A short position could be entered if the stock were to break the trend line support.
Please share this article
at 12:03 AM No comments: Links to this post