The Gold Report: You told The Gold Report last year you were “neutral” on the state of the U.S. economy. Since then, the headline unemployment number has improved. Even so, as David Stockman, former director of the Office of Management and Budget, says, there have been no net new jobs created since July 2000, and jobs paying over $50,000 per year have disappeared by 18,000 per month since 2000. What is your view of the health of the U.S. economy?

Eric Coffin: I’m more positive than neutral these days, but I do agree somewhat with Stockman. As unemployment falls toward 6%, we would expect an increase in wage gains. But we’re just not seeing that. And five years into the latest expansion, we’re not seeing the economic growth spurts that tend to occur coming out of a really bad recession. I don’t see how the U.S. economy keeps reproducing the 4% Q2/14 growth if we don’t see higher wage gains and higher paying jobs created. (more)
Please share this article
at 12:05 AM No comments: Links to this post MSFT has been trending consistently higher for the entire last year, and during the last 8 months, the stock has also formed a clear trendline of support (green). In addition, the stock had also created at 52-week high resistance level at $45.50 (blue) in July and August. At some point MSFT was going to have to break one of those two levels, and late last week the stock broke through resistance to a new high.

The Tale of the Tape: MSFT broke though its $45.50 resistance, which was also a new 52-week high. A long trade could be made on a pullback down to the $45.50 level with a stop placed below that level. A break back below $45.50 should lead to a fall down to the trendline support., which is currently approaching $44.
Please share this article
at 12:04 AM No comments: Links to this post 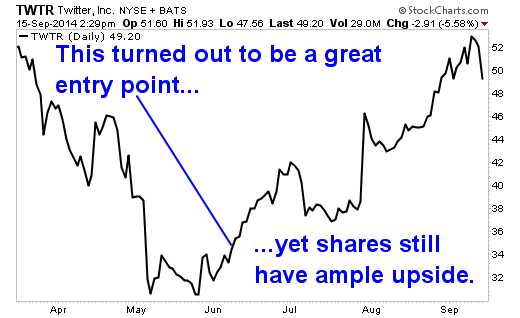 In the brief history of social media stocks, history is repeating itself. Both Facebook (NASDAQ: FB) and Twitter (NASDAQ: TWTR) stumbled badly after much-hyped IPOs. And both are now gaining meaningful traction, cementing their roles as powerful platforms for the global ad market.
Of course, we now know how wrong many investors were about Facebook. A little more than a year ago, it appeared as if the company's management was ill-suited to the task of converting a massive user base into a profit machine -- what's known in the tech industry as "monetizing the base" -- and shares languished below $25.
Investor cynicism toward Facebook surely proved short-sighted. 2015 sales will likely exceed $16 billion, more than double the company's 2013 sales base, and shares now trade above $75. (more)

How to Invest in the Next Disruptive Tech Trends

Lou Basenese, Founder and Chief Analyst at Disruptive Tech Research, talks about two new tech trends that are about to change the world.

He also talks about what to expect from Alibaba's IPO, the huge surge in GoPro and his favorite technologies developing from Apple's new product launch.

Then, Debra Borchardt, market analyst at S&A, talks about her recent trip to the Disrupt San Francisco TechCrunch conference.

This is where some of the biggest names in technology including Peter Thiel (billionaire and PayPal founder), Mark Cuban (billionaire entrepreneur), and Marissa Mayer (CEO of Yahoo!) talk about their favorite new tech ideas. (more)
Please share this article
at 12:03 AM No comments: Links to this post