Lindsey Williams ~ The Global Currency Reset by The Elite in 2014

Lindsey Williams on GoldSeek Radio speaking with Chris Waltzek on 4th December 2013 talking about a global currency reset that if the Elite have their way will take place within 90 days. He confirms this is not the collapse or a devaluation of the American dollar, but it will cause the dollar to lose its world reserve status. This will be the biggest financial event in the last 1,000 years from the prespective of Pastor Williams' Elite friends. Every person on the globe will be affected. 204 nations have agreed with the IMF (International Monetary Fund) to revalue their currencies to within 3 to 5% of each other based upon the assets of each country. This will end the currency wars and give the New World Order full control with a new gold backed currency. it will mean the US dollar will be reset down by 30% of its current value. He says that bank holidays are still another year off and that 30-50% of private, state and federal retirement funds are to be nationalised and/or confiscated between now and then.

Pastor Williams also discusses the main reason for the dumbing down of America is the smart meter microwave technology being installed in every home, implemented to prevent people revolting over what the Elite are about to do with them. Lindsey Williams verified this information with research from Barrie Trower, a former microwave weapons expert.

Lindsey also refers to an IMF meeting held on 9th October 2013, the minutes of which were recently released. The report is called "Taxing Times". In this report the IMF recommends the USA does the following: Increase taxes; New capital controls; Sieze retirement funds and Bring the national debt down to pre-banking crisis 2007 levels. You can download the report here: http://www.imf.org/external/pubs/ft/f...

Pastor Lindsey Williams also says to watch the news carefully over the next three months. He said that when you see that his source was right about the global currency reset, you will conclude that his Elite friend is also right about everything else too, including smart meters and what they are doing to our brains. Lindsey Williams repeats again to get out of paper assets at all costs.

He announces his new DVD "Global Currency Reset" that is now available at Prophecy Club.
Please share this article
at 12:05 AM No comments:

Lassonde – This Will Trigger Next Leg Of The Gold Bull Market

You can have a disconnect between the paper gold market and the physical gold market for several months before the physical market reasserts itself. At the end of the day, it’s whoever buys the last ounce of physical gold that will determine the price of gold.
But in the meantime, the paper gold market is 10 times bigger than the physical market, so it can dictate price for quite a few months, and you can have a disconnect. It is quite true that in China, in particular, 2013 will be a record in terms of gold demand.
Pierre Lassonde continues @ KingWorldNews.com

Hedgies continue selling across the gold market ( at least they did before Wednesday this week - after that they were doing some short covering). In a near repeat of last week's behavior, they did not liquidate all that many existing long positions. They continue to gradually rid themselves of those, which is a bit surprising to me. What they are doing is adding more short positions as they maneuver to play gold from the short side. 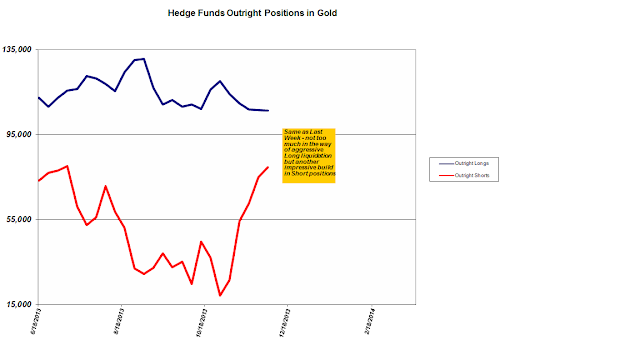 I want to emphasize that for all this, this group still remains net long the gold market and has been since the inception of this particular reporting data going back to the summer of 2006. One thing to point out however, is that their overall net long position is the smallest since January 2007. Translation - hedge funds have not been this bearish on the prospects for gold in nearly SEVEN YEARS!  (more)Please share this article
at 12:03 AM No comments:

An Interview with David Morgan

This time of year, it’s easy to get wrapped up in the holidays and push unpleasant things like tax planning into January…

But believe me — a few tax tips will actually come in handy sooner than later.

For some tax decisions — such as how much to contribute to an IRA or Roth IRA — waiting is perfectly fine. You until have April 15 of next year to make your 2013 contributions.

However, you should start your planning now, and we have plenty of tax tips for you to use before year’s end.

Changes to the tax code are scheduled to be minor in 2014, so you don’t need to do anything too drastic. But it still makes sense to pull as many tax breaks into your 2013 tax return as possible. (more)

One of the men that won the Nobel Prize for economics this year says that "bubbles look like this" and that he is "most worried about the boom in the U.S. stock market."  But you don't have to be a Nobel Prize winner to see what is happening.  It should be glaringly apparent to anyone with half a brain.  The financial markets have been soaring while the overall economy has been stagnating.

Reckless injections of liquidity into the financial system by the Federal Reserve have pumped up stock prices to ridiculous extremes, and people are becoming concerned.  In fact, Google searches for the term "stock bubble" are now at the highest level that we have seen since November 2007.  Despite assurances from the mainstream media and the Federal Reserve that everything is just fine, many Americans are beginning to realize that we have seen this movie before.  We saw it during the dotcom bubble, and we saw it during the lead up to the horrible financial crisis of 2008.  So precisely when will the bubble burst this time?  Nobody knows for sure, but without a doubt this irrational financial bubble will burst at some point.  Remember, a bubble is always the biggest right before it bursts, and the following are 15 signs that we are near the peak of an absolutely massive stock market bubble...
#1 Bob Shiller, one of the winners of this year's Nobel Prize for economics, says that "bubbles look like this" and that he is "most worried about the boom in the U.S. stock market."
#2 The total amount of margin debt has risen by 50 percent since January 2012 and it is now at the highest level ever recorded.  The last two times that margin debt skyrocketed like this were just before the bursting of the dotcom bubble in 2000 and just before the financial crisis of 2008.  When this house of cards comes crashing down, things are going to get very messy...

"When the tablecloth gets pulled out from under the place settings, you're going to have a lot of them crash and smash on the floor," said Uri Landesman, president of Platinum Partners hedge fund. "That margin's going to get pulled and everyone's going to have to cover. That's when you get really serious corrections."

#3 Since the bottom of the market in 2009, the Dow has jumped 143 percent, the S&P 500 is up 165 percent and the Nasdaq has risen an astounding 213 percent.  This does not reflect economic reality in any way, shape or form.
#4 Market research firm TrimTabs says that the S&P 500 is "very overpriced" right now.
#5 Marc Faber recently told CNBC that "we are in a gigantic speculative bubble".
#6 In the United States, Google searches for the term "stock bubble" are at the highest level that we have seen since November 2007 - just before the last stock market crash.
#7 Price to earnings ratios are very high right now...

#8 According to CNBC, Pinterest is currently valued at more than 3 billion dollars even though it has never earned a profit.
#9 Twitter is a seven-year-old company that has never made a profit.  It actually lost 64.6 million dollars last quarter.  But according to the financial markets it is currently worth about 22 billion dollars.
#10 Right now, Facebook is trading at a valuation that is equivalent to approximately 100 years of earnings, and it is currently supposedly worth about 115 billion dollars.
#11 Howard Marks of Oaktree Capital recently stated that he believes that "markets are riskier than at any time since the depths of the 2008/9 crisis".
#12 As Graham Summers recently noted, retail investors are buying stocks at a level not seen since the peak of the dotcom bubble back in 2000.
#13 David Stockman, a former director of the Office of Management and Budget under President Ronald Reagan, believes that this financial bubble is going to end very badly...

"We have a massive bubble everywhere, from Japan, to China, Europe, to the UK.  As a result of this, I think world financial markets are extremely dangerous, unstable, and subject to serious trouble and dislocation in the future."

#14 Bob Janjuah of Nomura Securities believes that there "could be a 25% to 50% sell off in global stock markets" over the next couple of years.
#15 According to Tyler Durden of Zero Hedge, the U.S. stock market is repeating a pattern that we have seen many times before.  According to him, we are experiencing "a well-defined syndrome of 'overvalued, overbought, overbullish, rising-yield' conditions that has appeared exclusively at speculative market peaks – including (exhaustively) 1929, 1972, 1987, 2000, 2007, 2011 (before a market loss of nearly 20% that was truncated by investor faith in a new round of monetary easing), and at three points in 2013: February, May, and today."
As I mentioned at the top of this article, this stock market bubble has been fueled by quantitative easing.  Easy money from the Fed has been artificially inflating stock prices, and this has greatly benefited a very small percentage of the U.S. population.  In fact, 82 percent of all individually held stocks are owned by the wealthiest 5 percent of all Americans.
When this stock market bubble does burst, those wealthy Americans are going to be in for a tremendous amount of pain.
But there are some people out there that argue that what we are witnessing is not a stock market bubble at all.  That includes Janet Yellen, the new head of the Federal Reserve.  Recently, she insisted that there is absolutely nothing to be worried about...
Please share this article
at 12:03 AM No comments: