Is This The Diabolical “Master Plan” Behind Crushing Europe’s Depositors

Last week, when we commented on the absolutely idiotic Eurogroup proposal (now voted down and replaced by an equally idiotic “bank resolution” proposal which will see uninsured deposits virtually wiped out) to tax uninsured and insured deposits, we jokingly suggested that this may be merely the latest ploy by the legacy status quo to achieve one simple thing: force depositors across the continent (and soon, world) to pull their money out of a malevolent, hostile banking system and push that money into stocks, or simply to spend it. This would help finally defeat the biggest bogeyman of the centrally-planned reflation attempt in the past 4 years – the absolutely dismal velocity of money which drops every time the G-7 central planners inject liquidity into stocks.

We were joking, because it would be beyond conspiratorial to suggest that a central bank could go as far as wiping out the wealth and savings of an entire nation in order to promote broken monetary policy. It would be outright idiotic and not to mention criminal. Why purposefully endanger depositors, and thus an entire financial system, just to spook them and their money? Or so we thought until we read the following just as “conspiratorial” take from Deutsche Bank’s Jim Reid:
Read More @ ZeroHedge.com

It would appear, all else being equal, that the algos have found a new leverage asset to save stocks. Given the uncertainty in Europe, EURUSD and EURJPY have lost their effectiveness; Treasuries won’t play along due to the safety bid and Fed footprint; high-yield won’t budge as fundamentals are making people nervous; and even VIX won’t shift as protection is sought. So it seems, given the entire lack of any fundamental reasoning for today’s move, that WTI crude is the asset of choice to ramp correlations with stocks higher. This last 3-day push is the biggest move in WTI since August of last year as it pushes back towards the year’s highs (and RBOB is following suit) – not exactly boding well for the price at the pump shortly.
READ MORE

One of The Greatest Investment Opportunities of a Generation: HEK 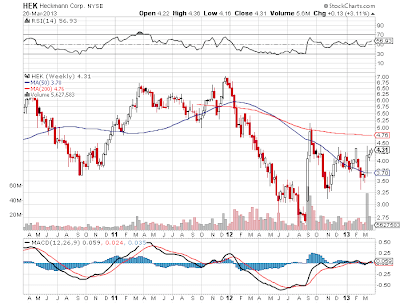 It's official. According to the International Energy Agency (IEA), the United States could be the world's largest oil-producing country in the next seven years.

Based on the report, the United States could surpass all other countries in oil production by 2020. And 10 years later, the country could be energy-independent.

Talk about your 180-degree turnarounds.

For the past several decades, the United States has depended heavily on imports to feed its 19-million-barrel-per-day oil habit. In fact, about one out of every five barrels the United States consumes each day comes from a foreign country.
But if this forecast is accurate, then the United States production could eventually outpace domestic consumption. So instead of bringing in oil, we could be shipping it out.

Is this plausible? You bet it is.

In fact, the whole scenario sounds eerily similar to what has happened in the natural gas market. A decade ago, every credible analyst was convinced that the United States was running out of gas, and energy companies spent billions to construct import terminals.  (more)

by Marin Katusa, Casey Research:
In an interview with ProactiveInvestors, Chief Energy Investment Strategist Marin Katusa provides a succinct overview of the short-term outlook for various energy sectors, plus how to evaluate specific companies.

Economic and political winds have buffeted the energy sector lately. Is the US really poised to become energy independent? Is uranium on again, or off? How will North American oil sands production change the oil sector? It’s hard to know which will turn out to be the best energy plays of the year, but a savvy investor can position himself for maximum profits.
Read More @ CaseyResearch.com

Jamie Mackie: I think the gold mining stocks are at or near the bottom. Research from the Ned Davis Research Group shows that pessimism is extremely high—typically an indication that we are close to a bottom. From our perspective, that is the best time to position yourself. Once the market begins to turn, it will happen rapidly. Investors need to recognize value and get in reasonably early to avoid paying up later.

I compare the situation to being at a huge party; the party being the blue chip, dividend-paying sector. The party has been going on for quite a while, and it is hard to leave the party and sit in a room all alone. But that is what investors should do, spend time in the room alone, waiting for others to join them.

TGR: From a wealth-building perspective, how do mining equities fit in a world that is deleveraging?

JM: Your choice of the word deleveraging is interesting because I would say the world as a whole is not deleveraging.  (more)

As shown, the S&P 500 and six of ten sectors remain in overbought territory, with Consumer Staples the most overbought.  Nine of ten sectors are above their 50-day moving averages.  The Materials sector has moved solidly below its 50-day with today’s declines.

Interestingly, while the US remains on solid ground, the rest of the world has been struggling.  Below is our trading range screen run on the 30 largest country ETFs.  As shown, 14 of the 30 countries are actually in oversold territory, while just two (Japan and the US) are overbought.  Brazil is the most oversold, while countries like Spain, Columbia, India, South Africa and Taiwan aren’t far behind.  In late 2012, it was the US that struggled while the rest of the world rallied.  That trend has completely reversed as the first quarter of 2013 comes to an end.

Today Jim Sinclair spoke with King World News about the historic events which are taking place, the unfolding drama in Cyprus, and bank runs in Europe. Below is what Sinclair, who was once called on by former Fed Chairman Paul Volcker to assist during a Wall Street crisis, had to say.

Eric King: “Jim, this is a quote from your March 20th KWN interview”:
“Cyprus cannot, will not, absolutely must not leave the euro. They know that quite well. So the break of the euro market down into the 1.28 area must have sent shock waves through decision-makers in euro land. Cyprus must be rescued because they cannot be allowed to leave the euro.”

Again, you said that 5 days ago and that was incredibly accurate.”
Jim Sinclair continues @ KingWorldNews.com