All Signs Pointing to Gold

With another syringe of quantitative easing being injected into the U.S. economy’s bloodstream, Ben Bernanke is giving the markets their liquidity fix. The Federal Reserve’s action reaffirmed my stance I’ve reiterated on several occasions that the governments across developed markets have no fiscal discipline, opting for ultra-easy monetary policies to stimulate growth instead.

The government’s liquidity shot promptly boosted gold and gold stocks, as investors sought the protection of the precious metal as a real store of value. You can see below the strong correlation between the rising U.S. monetary base and growing gold value. Since the beginning of 1984, as money supply has risen, so has the price of gold.

The dollar declined due to the Fed’s easing, which isn’t surprising, given the fact that gold and the greenback are often inversely correlated, and increasing money supply generally causes the currency to fall in value.

What’s interesting is that currency decline was what Richard Nixon sought to avoid when he ended the gold standard in 1971 and announced that the country would no longer redeem its currency in gold. During his televised speech to the American public, Nixon translated in simple terms the “bugaboo” of devaluation, saying, “if you are among the overwhelming majority of Americans who buy American-made products in America, your dollar will be worth just as much tomorrow as it is today.” (more)

In the latest filing for Buffett’s holding company Berkshire Hathaway, Buffett has been drastically reducing his exposure to stocks that depend on consumer purchasing habits. Berkshire sold roughly 19 million shares of Johnson & Johnson, and reduced his overall stake in “consumer product stocks” by 21%. Berkshire Hathaway also sold its entire stake in California-based computer parts supplier Intel.

With 70% of the U.S. economy dependent on consumer spending, Buffett’s apparent lack of faith in these companies’ future prospects is worrisome. (more)

Russia is sitting on 'trillions of carats' of diamonds

'Trillions of carats' lie below a 35-million-year-old, 62-mile-diameter asteroid crater in eastern Siberia known as Popigai Astroblem. The Russians have known about the site since the 1970s.

Russia has just declassified news that will shake world gem markets to their core: the discovery of a vast new diamond field containing "trillions of carats," enough to supply global markets for another 3,000 years.

The Soviets discovered the bonanza back in the 1970s beneath a 35-million-year-old, 62-mile diameter asteroid crater in eastern Siberia known as Popigai Astroblem.

They decided to keep it secret, and not to exploit it, apparently because the USSR's huge diamond operations at Mirny, in Yakutia, were already producing immense profits in what was then a tightly controlled world market. (more)

The Dollar is Toast

Sell the dollar, and buy everything else. Follow this simple advice, and it’s very likely you will make money in the next few weeks.

A couple of months ago, I did not think the Fed would implement QE III because the market was already booming. We all know that QE doesn’t really help the economy, but it’s great for financial assets. So I thought there was really no need for more money-printing.

But last month, the Fed started to send signals that it would print more money. And last week, it delivered.

I never actually thought Bernanke would be crazy enough to implement another round of money-printing with the market already trading at 52-week highs. I guess I underestimated his level of insanity.

This round of money-printing is a little different than the previous two rounds. This time nobody really knows the size of QE III. With QE II, the Fed bought $600 billion worth of securities.

The Fed will start with $40 billion a month this time, with the flexibility of increasing the size of purchases if the economy weakens. If the Fed keeps that pace, it will take a little more than a year for QE III to match the size of QE II.

In the long-term, I have no doubt his policies will cause major capital misallocations that will result in other crises and bubbles around the world. In the short-term, we shouldn’t fight the Fed. It’s time to trash the dollar and buy pretty much everything else.

The Dollar Will Suffer Another Double-Digit Drop, Thanks to the Fed

The chart above shows the FXCM dollar index, which measures the performance of the buck against four other major currencies, the euro, the British pound, the Japanese yen and the Australian dollar. The previous rounds of QE were followed by a double-digit drop in the dollar. I expect a similar drop this time.

Market Outlook: If You Could Only Choose One Investment, This Would be It

Traders seem to like the Fed's decision to implement QE3 and boosted the prices of both stocks and gold. There was one very big winner in QE2, and now it's time to buy that ETF again.

For the second week in a row, SPDR S&P 500 (NYSE: SPY) gained more than 2% last week. Also for the second week in a row, PowerShares QQQ (NASDAQ: QQQ), an ETF that tracks the 100 largest Nasdaq stocks, lagged SPY and delivered a gain of only 1.08%. Many traders believe that in a healthy bull market the most speculative stocks will be the biggest winners, and QQQ should be the better performing index under that theory. This is a possible signal that stocks may be ready for a pullback.

A pullback would be consistent with the election cycle, which indicates a weak stock market into early November. That indicator calls for a peak in most major stock market indexes this week. Alone that is not enough to generate a sell signal, but the chart of QQQ below does provide enough bearish indicators to justify tightening stops on long positions.

In addition to being overbought based on the Bollinger Bands, the stochastics indicator has formed a negative divergence with lower values accompanying new highs in price.

While a pullback would not be unexpected, QE3 is bullish for the longer term. A chart included in last week’s market outlook showed that stocks have moved higher in the past when the Fed is easing. With the Fed planning to commit at least $480 billion to QE3 during the next 12 months, if stocks rise only half as much as they have under QE1 and QE2, we should expect a gain of about 10% in SPY. Of course, prices could follow a different path this time and we should trade the trend we see in the charts rather than what the news stories tell us to expect.

Silver Could be the Precious Metal to Trade

QE has been bullish for gold in the past and traders holding SPDR Gold Trust (NYSE: GLD) should see additional profits. They enjoyed a gain of 1.99% last week. Based on the charts shown in last week's market outlook, we could expect to see a gain of about 32% in GLD if the effects of QE are consistent with what we saw in the past. There is, however, the chance for an even bigger gain. During QE2, silver delivered bigger gains than gold, and silver miners outperformed both metals.

In the first days of QE3, we are seeing the same pattern. iShares Silver Trust (NYSE: SLV) outperformed GLD last week with a 2.94% gain. Global X Silver Miners (NYSE: SIL) did even better with a gain of 8.23% for the week, and based on history, there should be more gains ahead for both of these ETFs.

Traders should continue holding GLD, and if trading capital permits, add SIL to their portfolio. If forced to choose just one position in the precious metals market, SIL should be the biggest winner.

September 16, 2012 – The US federal government spent $369 billion in August, but only received $179 billion in revenue. The resulting $190 billion deficit was a record for any August and the third highest monthly deficit in the current fiscal year, which ends on September 30th.

Looking at this deficit another way, the federal government borrowed 51.6% of the dollars it spent in August. Consequently, the growth of the national debt continues to accelerate, as illustrated by the green bars in the following chart.

This chart also illustrates that the deficit – the gap between expenditures (red line) and revenue (blue line) – is not narrowing to any significant extent, which is a critically important observation. A persistent gap that is barely shrinking has never happened before.

Normally economic activity revives after a recession, which in turn leads to increased revenue for the federal government, like it did from 2004-2008 when the more rapid growth in revenue almost eliminated the deficit. But not this time. Revenue is increasing, but so are expenditures at almost the same rate. (more)

To analyze Kirby's stock for potential trading opportunities, please take a look at the 1-year chart of KEX (Kirby Corporation) below with my added notations: 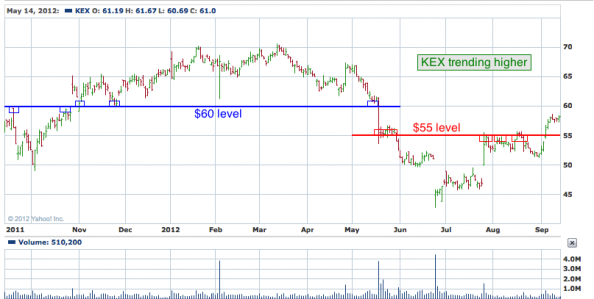 KEX has been trending higher nicely since June. For now, there are two key levels to watch on the stock: The $60 level (blue) was a clear resistance in October and November, broke above that level, and then it became support until May. The $55 level (red) was a brief support in May and a strong resistance in July and August. KEX is currently trading between these two levels.
at 12:03 AM No comments: Links to this post

1 in 3,000, Does This Mean Anything to You? According to Doug Casey and Marin Katusa, it Should!

It should because only 1 in 3,000 mining projects ever go into production. Amazing isn't it, all those great stories of getting rich from a junior resource company, and most will fail.
Recently we sat down with Marin Katusa and Doug Casey for an interview. When asked about the Casey Research NexTen, a group of young individuals who have already built a mining company, we asked them who was the first person that comes to mind when thinking about who to invest with. The answer, Amir Adnani, a 34 year old entrepreneur who is the founder and current CEO of 1 of only 5 uranium producers in the country, 1 of only 10 in the world. Marin went on to say he believes Amir is one of the few individuals he can count on to make money with for the next 3 decades.
When asked about where he is putting his money now, Marin brought up the KCR Fund which is ran by himself, Doug Casey, and Rick Rule, he said that they are investing with Amir in Brazil Resources Inc. The KCR Fund is the largest shareholder of Brazil Resources Inc (TSXV: BRI & OTCQX: BRIZF) and we believe this public endorsement is going to be huge for early Brazil Resources investors.
To learn more about BRI, please visit www.BrazilResources.com where you can download a company investor presentation.

To listen to this exciting interview about what it takes to become a legendary investor, please watch below.