London Trader – The LBMA Is A Massive Ponzi Scheme

On July 20th, the ‘London Trader’ told King World News, “The LBMA’s price fixing scheme is coming to an end.” Gold quickly rose $200 after that interview. Today the source now tells KWN the LBMA has, “… incredibly large quantities of paper silver and gold being traded each day, but the real problem here is there is virtually nothing to back this up.” The source also said, “This is all part of the LBMA Ponzi scheme.”

King World News has now released a total of three written interviews with the London Trader. This is the third in a series of blockbuster interviews which uncovers what is happening behind the scenes in the gold and silver markets. The source also discussed the incredible tightness in the physical silver market.
Robert Fitzwilson continues @ KingWorldNews.com

Play This Sin Stock for a Potential 60% Return


Altria Group (NYSE: MO), the parent company of leading cigarette manufacturer Philip Morris USA, is a defensive stock play. Despite sin taxes and a more negative attitude toward smoking in the United States, the company has strong brand power and could capitalize on growing emerging markets. And with a 5.3% yield, many investors buy the stock for the dividend alone.
As the chart below shows, the $30 level proved to be a breakout area for the stock's climb higher. It is also the halfway support of the 2011 lows to the 2012 highs.

MO is down almost 8% on profit-taking since the August highs at $36 per share. With many stocks currently near their highs in a strong uptrending market, laggards are attractive, especially those that would be good long-term holdings in any market environment.
The initial upside objective is above the $36 highs based on the technical wedge pattern. Only a weekly close below the $30 level would negate the bullish trend.  (more) 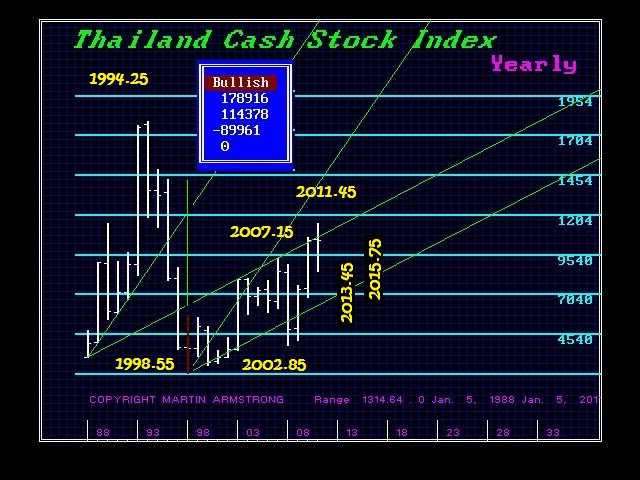 armstrongeconomics.com / By Martin A. Armstrong
What a lot of people in the West may be unaware of is that Southeast Asia is trying to blend their economies into a trading region. They are maturing and preparing to rise as a very important economic center for world capital. Most significantly, when I was invited to Beijing following the 1997 Asian Currency Crisis, still the majority of people on the roads were on bicycles. Today, barely 1% are still riding bikes. Asia has matured greatly since 1997 and above all, it has followed the Economic Confidence Model perfectly, which is one of the primary reasons for the acceptance our our models in Asia and why Beijing requested I travel to China at that time.
Here is a chart of the Thailand Share Index on an annual basis. The high came perfectly with the low to the day in the S&P 500 in the United States. The low in Thailand came with the July 20th, 1998 peak in the US market. It then consolidate constructing a base into 2002 and then rallied into the 2007.15 turning point. We have elected one Yearly Bullish Reversal and have two to watch for the sign of a major breakout to the upside.
Asia is perhaps the brightest star in the sky for investment as we look and economic declining power of the United States and Europe. This will be a major focus of our Bangkok Conference and why we are holding this one in Southeast Asia.
armstrongeconomics.com
at 12:06 AM No comments:


Fundamental data is often ignored by traders because price-to-earnings (P/E) ratios and dividend yields may seem to have little influence on short-term market action. A number of studies have shown that buying low P/E stocks or stocks that offer higher-than-average dividend yields can be a profitable strategy for long-term investors who measure their holding periods in years. This is usually considered to be the domain of value investors.

Traders realize that earnings are updated by companies only once every three months and dividends change even less frequently. Because traders are looking at ideas that can be profitable in days or weeks, these slow-moving variables are rarely looked at. However, both of these fundamental data points include the current price in their calculation, which means that P/E ratios and dividend yields actually change, at least slightly, throughout every trading day.

Testing the idea of buying value stocks for short-term gains shows promising results and these variables can be used by traders to gain a short-term edge in the markets. First, traders need to think of the data differently than they usually do.


Value investors may define a low P/E ratio as less than 10, or they may want to buy stocks with dividend yields that are at least twice as high as the interest rate available on a 10-year Treasury note. This interpretation will not identify short-term trades since a P/E ratio might stay under 10 for years, for example.

In the chart, we can see that C has been in an uptrend since July, while its dividend yield has been falling and the P/E ratio has been rising. Over the time shown in the chart, the yield would always be considered low, staying between 0.1% and 0.16%, while the P/E ratio moved from about 7 to 11. (more)

Yamana Gold Inc. engages in the exploration, development, and production of mineral properties, primarily gold. It also explores for copper, molybdenum, zinc, and silver metals. The company's property portfolio includes seven operating gold mines, including Chapada mine, Jacobina mining complex, and Fazenda Brasileiro mine in Brazil; El Peñón mine and Minera Florida mine in Chile; Gualcamayo mine in Argentina; and Mercedes mine in Mexico. It also has a 12.5% indirect interest in the Alumbrera copper/gold/molybdenum mine in Argentina, as well as holds interests in various advanced and near development stage projects and exploration properties in Brazil, Chile, and Argentina. Yamana Gold Inc. was founded in 2003 and is headquartered in Toronto, Canada.

To review Yamana's stock, please take a look at the 1-year chart of AUY (Yamana Gold, Inc.) below with my added notations: 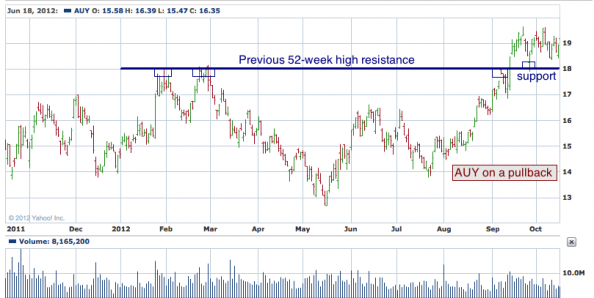 From January until early September, AUY created a key resistance level at $18 (navy). That resistance level was a 52-week high breakout when the stock broke above it in September. That breakout was a signal that the stock should be moving higher, which the stock did do. Now that AUY is pulling back, the old $18 resistance should provide support for the stock, which it has already done once last month.
at 12:04 AM No comments:


A Look at This Week’s Show:
-Steve Forbes calls for a gold solution to paper currency
-Paper currency inflation slowly steals our standard of living
-Gold standards of the past: an important history


Every once in a while, traders seem to forget that market prices move up and down and start expecting to see a move in one direction last forever. In the late 1980s, many traders assumed that the Japanese stock market was on a one-way trip up, and some believed there was no way to stop Japan's economy from growing. They were wrong, and a 23-year bear market has now led to the opposite feeling -- that Japan is in a never-ending decline.

Japanese stocks actually make fairly large moves up and down. The index is about 26% above its October 2008 lows, but has made six moves of 19% or more during that time. On average, the index delivers a tradable trend about every eight months.


Indicators, including recent news, show that the next trend in Japanese stocks is likely to be down and could be starting now. At the beginning of October, the Bank of Japan lowered its expectations for the economy and noted, "Japan's economic activity is leveling off more or less." This statement reinforced the opinion that the central bankers offered a month earlier that growth "has come to a pause."

Business leaders in Japan appear to agree with the central bank's assessment. International companies will invest where they can get the highest return on their investment and Japanese companies are increasingly turning overseas. According to Bloomberg, Japanese companies spent a record $88 billion on overseas acquisitions last year, and after Softbank's (OTC: SFTBY) recent $20 billion acquisition of Sprint Nextel (NYSE: S), analysts believe a new record might be set this year.

Softbank is a former Internet bubble stock that has survived and prospered in the downturn. Softbank is now Japan's third-largest wireless phone company and owns a number of websites. It is an Internet giant in Japan, and its stock has been among the leaders since the October 2008 bottom, gaining more than 420%.

From these news stories, we know that the Bank of Japan sees the economy slowing, and SFTBY and other Japanese companies with capital to invest are looking outside Japan. These are signals to traders that the Nikkei could be vulnerable to another decline and the charts show that a short trade could be profitable.

Rather than shorting Nikkei futures, traders can buy ProShares UltraShort MSCI Japan (NYSE: EWV) to profit from a drop in the Japanese stock market. The weekly chart of this ETF shows that the stochastics indicator just gave a buy signal.

We can also see in the chart that Bollinger Bands are contracting, an indication that volatility could pick up shortly. The Bands move closer to each other for a time and then expand away from each other. Narrow distances between the Bands show a consolidation, and a breakout usually follows. In the past when the Bands have contracted on EWV, the price has broken out in the direction indicated by the stochastics, which is up.

Another bullish indicator is the fact that the price is above the midpoint of the Bollinger Bands. After EWV moves above the 20-week moving average, it has hit the upper Band in the past. The monthly chart shows the same technical setup and an initial price target of $39.61. After clearing resistance at that level, EWV could reach $45.75, a target based on the triangle pattern that can be seen in the weekly chart.

Japan's stock market is once again a sell on the charts. And the fundamentals, i.e., indications from the country's monetary authorities and largest companies, support the sell recommendation. EWV is an ETF that allows individual investors to sell Japan easily.