Bull Run In Bonds Looks To Be Over

The Mar-April rally couldn’t muster new highs and added another lower high in place which continues to affirm that TLT has topped. I expect a small counter-trend rally up to $119 before this rolls over and get’s really bearish. The head/shoulder pattern on the weekly chart below paints a very bearish picture.

The fact that the housing market is improving is no longer up for debate. The argument now is over the character of the recovery, and whether the influence of home speculators is a danger.

The S&P/Case-Shiller house-price index of 20 big metropolitan areas rose a seasonally adjusted 1.1% in March from February, the largest monthly gain since April 2006, and was up 10.9% from a year earlier. Existing-home sales have been higher than year-earlier levels for 22 straight months. They recently reached their highest monthly level since government home-buyer tax incentives expired in November 2009.

Home prices are being flattered by a strong-supply-demand mismatch. New-house construction plunged far below normal levels in the deep housing bust, as pent-up demand for single-family dwellings built up amid record-low mortgage rates, foreclosure-plagued markets and weak labor conditions. Builders in some markets report being able almost to name their price on newly constructed houses. (more)

The last two months has seen ‘hope’ rise by its fastest rate in 18 months as this ‘survey’ of sentiment (as opposed to hard economic data) joins the UMich survey at pre-crisis levels of happiness. Of course one can cherry-pick the exuberant and dysphoric but we thought it interesting that the plans to buy a home, a car, or a TV within the next six months fell.

The reaction, equity prices and Treasury bond yields spike with the latter breaking 2013 highs to 13 months highs.
Please share this article
at 12:05 AM No comments: Links to this post 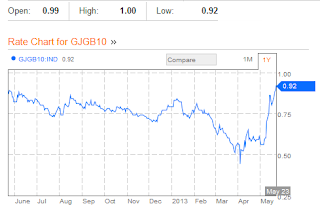 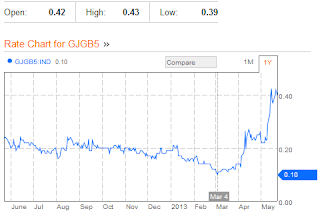 testosteronepit.com / By Wolf Richter / May 28, 2013 AT 11:39AM
The confidence of consumers in France is catching up with the economic situation in their country, where the state sector, which dominates the land with 56% of the economic activity, has been hobbled by budget woes, and where the private sector, which is struggling with an inscrutable labor code and slack demand, is suffocating under a pile of old and new taxes.Rien ne va plus, it seems.
Yet there were some welcome distractions for everyone: the bloody riots in central Paris this weekend offered up the illusion, at least on TV, that the primary problem, the one that would ultimately kill the Republic of France, was the recent passage of a law allowing same-sex marriages under the “Marriage for All” act, one of the planks in President François Hollande’s campaign platform. Alas, the vast majority of French people have more pressing problems than trying to get in the way of lovers wanting to walk down the aisle.
The household confidence index by national statistical agency INSEE plummeted 4 points in May, to 79, its all-time low of July 2009 during the worst of the financial crisis. Back in the day, consumer confidence spent a year and a half climbing out of that hole to reach 93 in January 2010, only to zigzag back down in a series of sharp declines followed by sharp increases, with lower lows followed by lower highs, a classic descent to consumer-mood perdition.
READ MORE
Please share this article
at 12:04 AM No comments: Links to this post

Housing 101: How To Figure Out Mortgage Payments 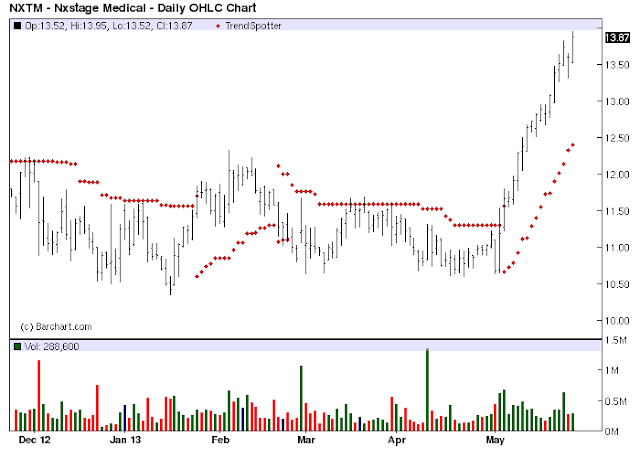 The Chart of the Day is Nxstage Medicine (NXTM) with both a Trend Spotter buy signal and 96% technical buy signals.  The Relative Strength Index of 79.94% was earned by having 18 new highs and a gain of 27.72% in the last month.  The stock was discovered on the New High List.

The company is a medical device company that develops, manufactures and markets systems for the treatment of end-stage renal disease, or ESRD, and acute kidney failure.

“There is the world that’s manipulating gold and the world that is buying gold. And in the world that’s manipulating gold all we have to do is look at the beginning of the week when Fed Chairman Bernanke came out and talked about whether or not they were going to keep interest rates low, or (have) more quantitative easing, and (then) we saw the reaction on the Street (Wall Street).
Following that gold spiked and then of course pulled back a bit, but for no reason at all because as you are looking at the real market conditions, there is no (economic) recovery, period. What have they dumped in, Eric? Some $17 trillion since the panic of 2008 hit, between quantitative easing and pumping money into the system.
Gerald Celente Audio Interview @ KingWorldNews.com