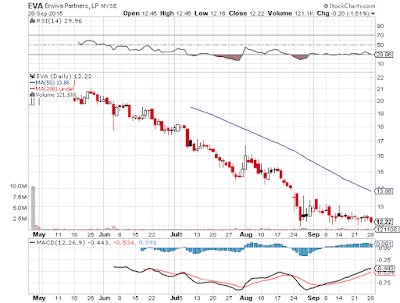 Enviva Partners LP (NYSE:EVA) is ready to profit from a unique renewable energy niche. The company produces and sells wood pellets that are used as fuel for electricity generation plants. EVA was also an April IPO. Company management claims that wood pellet sales are a growth business with demand increasing worldwide. Currently most of the demand for pellets is in Europe. Enviva owns and operates five production plants in the Southeastern U.S. The market does not see much value in the business, and the share price is down 40% from the IPO, pushing the yield to over 13%. Enviva has only paid one quarterly distribution, so this is really a watch and wait idea for conservative investors, or a very attractive yield for those who are willing to take on a higher level of risk. The stock is being followed by 4 analysts with price targets between $23.00-$26.00
at 12:03 AM No comments: 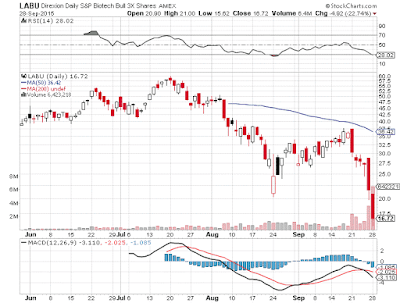 A week after presidential candidate Hillary Clinton made scathing comments about price gouging by the pharmaceuticals industry, biotechnology stocks and exchange-traded funds remain at the epicenter of what has rapidly become a precariously positioned healthcare sector.
However, some bearish leveraged biotech ETFs, namely the Direxion Daily S&P Biotech Bear 3X Shares LABD 22.07%, are enjoying life in the fast lane.

After surging more than 30 percent, LABD is up another 15.7 percent at this writing Monday on volume that is already more than double the daily average.
LABD underscores how quickly things can change for triple-leveraged ETFs and why the disclaimer that only active traders planning to hold these funds for just a few days should use these products, not buy-and-hold investors, is so often repeated.

LABD is now up more than 48 percent over the past five trading days, but the ETF entered Monday as Direxion's second-best leveraged ETF on a month-to-date basis, with a gain of 18.6 percent, according to issuer data.


If Disclaimer Awareness Is Minded, More Opportunity May Be Ahead

For traders willing to acknowledge that disclaimer, there appears to be more near-term opportunity with the likes of LABD due to professional investors' long positioning in the healthcare sector and biotech's elevated weights in major U.S. equity benchmarks.
“Friday was the biggest 1 day underperformance of the healthcare sector since April 2009. Currently, Biotech net exposures are still near/at all-time highs since 2010. Following sizable net buying of HC for 9 consecutive months, the pace has slowed materially in Sep. HC net flows have been mixed over the past few days although volumes have remained elevated,” according to a Morgan Stanley note out Monday.
“Although there are some idiosyncratic dynamics driving Biotech, the group was a lead indicator in the growth sell-off in March of 2014. Biotech represents 12 percent of the Nasdaq and 3.68 percent of the S&P 500, which is elevated versus history. It is also worth noting that Biotech vs E&Ps has been correlated to Long/Short 12M Momentum and there is a bit of disconnect there currently.”

Is Yen Setting Up For An Epic Rally? 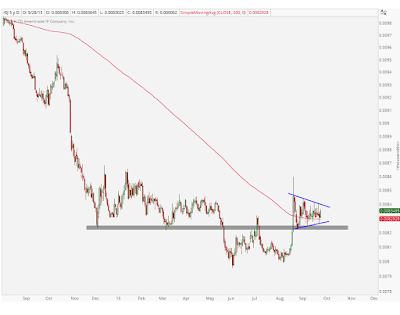 Over the past few months I’ve been focusing a lot of my attention on the Japanese Yen. As an American investor who trades U.S. stocks (among other asset classes), I think it would be irresponsible of me to ignore a currency with such a high negative correlation with the S&P500. I’ve been pounding the table lately about how obnoxiously high the negative correlation currently is between Yen and U.S. stocks and I still think it’s extremely important that we pay attention. (more)
at 12:03 AM No comments:

Michael Kors Holdings Limited engages in the design, marketing, distribution, and retailing of branded women’s apparel and accessories, and men’s apparel. The company operates in three segments: Retail, Wholesale, and Licensing. The Retail segment is involved in the sale of women’s apparel; accessories, which include handbags and small leather goods, such as wallets; footwear; and licensed products comprising watches, jewelry, fragrances and beauty, and eyewear. The Wholesale segment sells accessories, such as handbags and small leather goods, footwear, and women’s and men’s apparel to department stores and specialty shops in North America, Europe, and Asia. The Licensing segment licenses its trademarks on products, such as fragrances, beauty, eyewear, leather goods, jewelry, watches, coats, men’s suits, swimwear, furs, and ties, as well as licenses rights to third parties to sell the company’s products in geographical regions, such as the Middle East, Eastern Europe, Latin America, the Caribbean, Asia (excluding Japan), and Australia.
Take a look at the 1-year chart of Kors (NYSE: KORS) below with my added notations: KORS has been in a major decline for most of the past year. However, over the past 4 months the stock has created a key price level to watch at $45 (blue). As you can see, $45 was both support back in May, and resistance over the most recent 2 months. A break above that $45 level should mean higher prices for the stock.

The Tale of the Tape: KORS has a key level of resistance at $45. A long trade could be entered on a break through that level. However, if you are bearish on the stock, a short trade could be made on any rallies up to $45.
at 12:03 AM No comments: