Silver will track higher prices in gold, which is poised to rally on low real interest rates, buying by central banks and more geopolitical uncertainty, analysts including Peter Richardson and Hussein Allidina wrote in a report today. Corn and soybeans should benefit from production delays in South America, they said. The bank is bearish on aluminum, nickel, sugar and uranium as supplies are set to outpace demand.

Commodities tracked by the Standard & Poor’s GSCI Spot Index are down 0.4 percent this year, led by declines in coffee, cotton and sugar. The gauge nearly doubled in the three years to 2011 as central banks and governments around the world took action to boost their economies hurt by the global financial crisis in 2008. Morgan Stanley joins Goldman Sachs Group Inc. in predicting the so-called super-cycle isn’t over.

“Higher prices in recent years have brought both a supply and demand response, bringing many to call for the end” of the super-cycle, the analysts wrote. “We view this as too simplistic. Commodities are cyclical, but the elasticity of supply and demand, as well as the length of the cycle, vary significantly across the complex.” (more)

“They call it ‘Quantitative Easing’, I call it counterfeiting.” — Rick Rule of Sprott Asset Management

Real Estate: Is the Bottom In, or Is This a Head-Fake?

Everyone interested in real estate is asking the same question: Is the bottom in, or is this just another “green shoots” recovery that will soon wilt?
Let’s start by reviewing the fundamental forces currently affecting real estate valuations.


Expanding the pool of potential buyers has reached the upper limit

There are two ways to expand the pool of qualified home buyers, and they both rely on expanding leverage:  A) lower the down payment from 20% cash to 3%, and B) lower the mortgage rate to 3.5%.

Lowering the down payment increases the leverage from 4-to-1 to 33-to-1, a massive leap.

Increasing leverage increases risk. Over 90% of all mortgages are guaranteed or backed by Federal agencies such as FHA. This “socialization” of the mortgage industry means that losses ultimately flow through to the taxpayers, who are subsidizing the housing industry via these agencies.

Lowering the mortgage rate increases the leverage of income.  It now takes much less income to qualify for greatly reduced monthly payments.

With mortgage rates barely above the prime rate and Treasury bond yields negative in terms of inflation, there is simply no room left for lower rates or down payments.  The “increase home sales by expanding the pool of buyers” game plan has been run to the absolute limit. (more)

streettalklive.com / By Lance Roberts /
I have seen numerous articles as of late discussing how the average American family has finally delevered their household balance sheet at last.  This would be good news as lower debt levels means more personal savings which would lead to productive investment.  It would also mean more consumption that would provide stronger end demand to businesses.  Both of these outcomes are necessary for sustained economic growth.  The chart below has been used repeatedly to argue the deleveraging case for the economy.

At first glance the case of such deleveraging is clear.  Households have develeraged, however, household debt to GDP is a bit misleading because GDP includes all activity of the economy including corporations and government.  What we really want to know is how has the average American family is fared in this process.  This is important to know considering that Personal Consumption currently makes up more than 70% of the economy as shown in the first chart below.
READ MORE
at 12:05 AM No comments: Links to this post

South Africa Vanishes With Its Gold?

from The Daily Bell:

Last week’s shocking announcement by Statistics South Africa that the nation’s gold production had hit a 90-year low was met with token media coverage and surprisingly, hardly any outrage from labour unions, civil society or indeed the country’s population at large … The legacy of hatred and bitterness incited by the Anglo-Boer war and its cruel aftermath stimulated a toxic and destructive Afrikaner nationalism that eventually took hold of the country, with repercussions lasting almost a century. Throughout this period, gold provided an underpin to the nation’s economy. It contributed handsomely to tax coffers and generated valuable foreign revenue. What followed was spectacular wealth for a few and employment for thousands of desperate, marginalised people under despicable conditions at a very low wage. – Daily Maverick
Dominant Social Theme: Everything is still okay. Once apartheid died, the future became bright in both Zimbabwe and South Africa.
Free-Market Analysis: We never believed that either Zimbabwe or South Africa would work out as countries with a shared black and white heritage. Our fears have already been borne out in Zimbabwe and soon, we fear, the same sort of destruction will be visited on South Africa.
Read More @ TheDailyBell.com

Last year, 86 million Americans were not counted in the labor force because they didn't keep up a regular job search. Most of them were either under age 25 or over age 65.

NEW YORK (CNNMoney) -- There are far more jobless people in the United States than you might think.
While it's true that the unemployment rate is falling, that doesn't include the millions of nonworking adults who aren't even looking for a job anymore. And hiring isn't strong enough to keep up with population growth. (more)
at 12:04 AM No comments: Links to this post

It’s decision time on the Gold Cycles, we’re down to the business end and the action is about to reveal exactly where Gold is heading in the near future.  I believe that gold over the next 4 sessions will reveal where it’s headed over the next 4 months.
I covered my disappointment regarding the 1st Daily Cycle performance last week.  Since the Cycle clearly topped with the trend-line break, I warned members to expect $1,704 to be marginally taken out.  Well it’s gotten worse since then as the Cycle has given up more than 75% of its gains and is encroaching on the prior Daily and Investor Cycle Lows.
Although the Cycle is now in the timing band for a DCL and gold is oversold, we cannot rule out the possibility that Gold will drop further in a final attempt at breaking the prior Cycle Low.  Any Cycle failure at this point would be deemed both a Daily and Investor Cycle failure which sets the scene for another significant 12-16 weeks of declines back down towards the $1,523 level.  This type of action seems very unlikely though, considering the Dollar is already into its 12th week and rapidly declining due to its own Daily Cycle failure.  Having the Gold and Dollar Cycles fail simultaneously would be extremely unusual, which is why I do not believe it will happen. 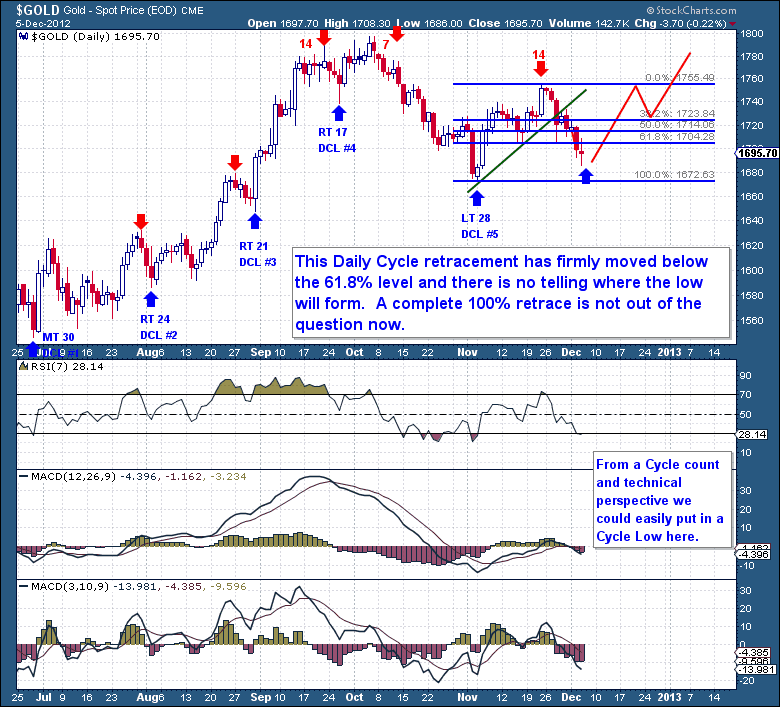 Another reason why I expect Gold to hold up is due to the strength being shown by Silver.  This poor cousin of Gold is generally much more volatile and with a correlation to gold of over 90% it normally is leading the charge into any Cycle failure.  Unlike Gold and the Miners, it’s Daily and Investor Cycles are actually very healthy and bullish.  The Daily Cycle has retraced exactly 50%, has fully recharged, and is now right ready to catapult out into its 2nd Daily Cycle.  Having Silver remain strong and well bid in this situation is a positive sign. 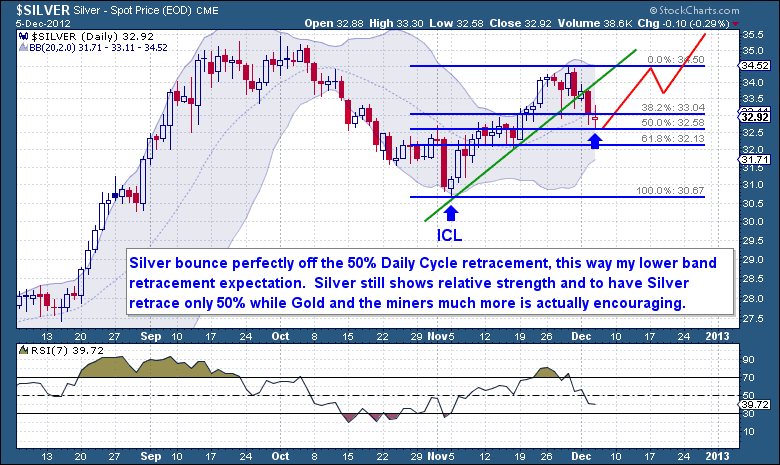 Governor of the Bank of Canada Mark Carney speaks during a press conference in Mexico City
rollingstone.com / By Matt Taibbi / December 6, 2012, 8:17 AM ET
Big news yesterday in the United Kingdom, where the citizenry surveyed its domestic banking system and discovered that it couldn’t find a single person trustworthy enough to put in the top job at the Bank of England. So they went to Canada and stole that country’s central banker, Mark Carney, who just happens to be a former Goldman, Sachs executive – he was once Goldman’s managing director of investment banking.
Carney’s appointment may be seen as an admission that the British banking sector is now so tainted, only an outsider can be trusted to govern them. Almost all of the major English banks have been dinged by ugly scandals. The LIBOR mess, in which banks have been caught messing around with global interest rates for a variety of sordid reasons, has most infamously implicated Barclays, but the Royal Bank of Scotland is also a cooperator in those investigations.
Meanwhile, HSBC has been accused of laundering billions of dollars of Mexican drug money, a monstrous mess that recalls the infamous Bank of New York scandal of the late Nineties involving Russian mob money; officials have described the HSBC culture as “pervasively polluted.” And the British bank Standard Chartered is now being forced to pay $330 million to settle claims that it laundered hundreds of billions of dollars on behalf of Iran.
READ MORE
at 12:03 AM No comments: Links to this post