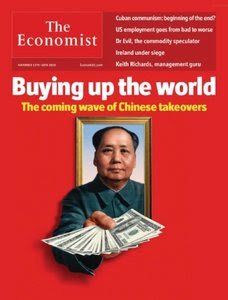 The Economist is a global weekly magazine written for those who share an uncommon interest in being well and broadly informed. Each issue explores the close links between domestic and international issues, business, politics, finance, current affairs, science, technology and the arts.
In addition to regular weekly content, Special Reports are published approximately 20 times a year, spotlighting a specific country, industry, or hot-button topic. The Technology Quarterly, published 4 times a year, highlights and analyzes new technologies that will change the world we live in.

With gold getting hit hard today, King World News interviewed legendary trader Jim Sinclair. When asked about the volatility in gold Sinclair stated, “I think from this point forward you are going to see unprecedented volatility. You’ll see $100 swings to $150 swings in a day, and if you go back to 1979 to 1980 we had $150 in one direction. So if we had $150 in one direction back then, what’s to stop this market from doing $300?”

“There is very little understanding of gold anywhere. The primary culprit that is threatening every country and that’s currency induced cost push inflation.

What started all of this was three things. The discussion early on about price controls in China. The discussion in Brazil about currency controls, and then on top of that talk of raising interest rates in China. Then the general commodity market collapsed on itself because everyone is up to their eyeballs in margin debt. (more)
at 12:22 AM No comments: Links to this post

The Scariest Crash Is The Muni Bond Crash 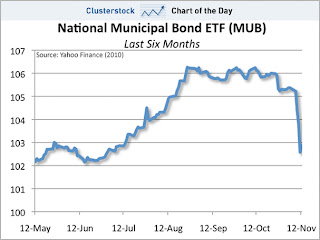 China crashed last night, but it's been riding a rocketship, so that's not a huge surprise.

Commodities are crashing today, but speculative have driven those up a lot, too, so it was natural they'd get hammered.

As Bespoke notes the National Muni Bond Fund ETF has totally fallen out of bed. This has been a big fear for awhile. Between the anti-bailout GOP Congress, and the worsening situation in California, maybe people are realizing this is real.
at 12:21 AM No comments: Links to this post 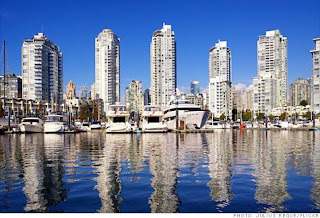 FORTUNE -- America may be on the ropes, but its neighbor to the North wants everybody to know that, in contrast, it's doing just fine.

Canada, once known mainly for its Mounties, maple leaves, and muscular peacekeeping presence, now can crow about how it managed to avoid the financial crisis that devastated many of the economies of the Western world. For instance, not one Canadian bank failed during the crash and only one reported a loss.

As David Rosenberg, economist for Gluskin Sheff, told Fortune earlier this week, he couldn't "recall a time, ever, where on the fiscal, economic, or political basis, relative to the United States, the downside risks were as limited and upside potential so compelling in Canada as is the case today."

All of this rings true, for now at least. But Canada still faces some stiff odds if it plans to slip through the crisis with nary a scratch. CIBC recently reported that Canada was likely to see its economic recovery squeezed next year, with a still-overvalued loonie falling to 93 U.S. cents and growth rates averaging "no better than 2% over the next few quarters." Canada's economy, said CIBC, was shifting "into a new phase of greater uncertainty." (more)

CHART OF THE DAY: Mortgage Reset 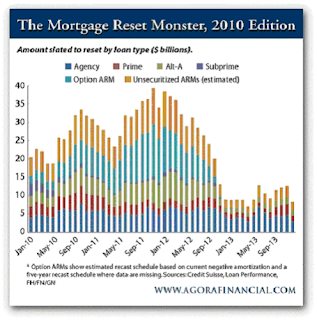 Commodities Tumble Most in 18 Months on Chinese-Rate Concerns

Commodities fell the most in 18 months on speculation that China will increase borrowing costs to damp inflation, eroding demand for crops, metals and energy.

The Thomson Reuters/Jefferies CRB Index of 19 raw materials fell 3.6 percent, the most since April 20, 2009. Sugar fell by a record 12 percent in London and the most in 22 years in New York. Corn and soybeans in Chicago dropped by the exchange limit.

China is the world’s leading consumer of many commodities, and consumer prices in the country last month topped a two-year high. On Nov. 9, raw materials rose to a 25-month peak as gold surged to a record, while cotton and copper headed for all-time highs. Wheat and rice also slumped today, and the grain component in the CRB had the biggest drop at 5 percent.

“The risk of rising Chinese rates increases the chances for demand to slow,” said Dale Durchholz, the senior market analyst at AgriVisor LLC in Bloomington, Illinois. “The message is, China is taking a more aggressive stance to cool inflation and push speculative money out of commodities.” (more)

Guest Post: Silver - Still The Investment Of A Lifetime

Silver is the common man’s currency. It always has been, and it always will be. While gold holds its place in history as the great stabilizer of economies and the shield against hyperinflation, its shine and its safety should not distract us from its brother, silver, whose uses are numerous and whose value is often more attainable for those seeking a solid investment outside of precarious paper securities.

Gold’s unprecedented upsurge in price the past year alone is now becoming the stuff of legend, and it is also something we at Neithercorp have been predicting for a while now:

The mainstream media attacks on precious metals were so extreme last year that they began to border on the bizarre. The “cult of fiat” was relentless in their attempts to slander gold investors and it seemed as though no matter how well the yellow stuff did, or how dismal the dollar’s performance was, they would never get tired of the disinformation game. Fast forward a year later, however, and they have been utterly silenced. What a difference twelve short months can make… (more)

When it comes to Dow Theory, there seems to be no shortage of opinion, but most often, that opinion is wrong. This is largely because of the fact that very few people have actually read and studied the original material by Charles H. Dow, William Peter Hamilton and Robert Rhea. Without that background, one cannot truly understand Dow Theory.

Of late I have been asked whether or not the bettering of the April highs triggered a so-called “Dow Theory buy signal.” Before I answer this question, it deserves a full explanation.

First let me say that in accordance with orthodox Dow Theory, there is no “buy” or “sell” signal. That’s right. Contrary to popular belief, there is no such thing. The Dow Theory founding fathers would anticipate trend changes just like we do. They would use minor negative non-confirmations and negative structural developments that hinted of a trend change as “Sell Spots.” At bottoms they would do the exact opposite using minor positive non-confirmations and positive structural developments that hinted of an upward trend reversal as “Buy Spots.”

They then looked for the Industrials and what was then the Rails, to close above their previous “Secondary High Point” in the case of a bottom, or the previous “Secondary Low Point” in the case of a top, in order to confirm that a “Primary Trend Change” had occurred. It is clear from reading the original writings that they did not wait for these Primary Trend Changes to occur before establishing positions. The problem with the interpretation today is that people do not understand what constitutes a secondary high or low point and they erroneously interpret moves above and below what is perceived as a secondary high or low point to be a “Dow Theory Buy or Sell signal.” Fact is, there is no such thing as a “Dow Theory Buy or Sell signal.” According to the original writings, there were Buy and Sell Spots, which were based on minor structural developments, in anticipation of turns and there are Primary Trend changes. (more) 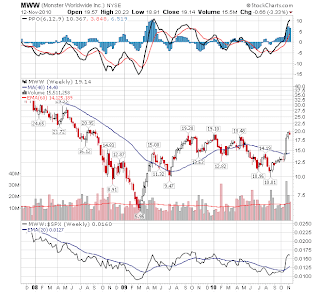 Buying stocks after they've been punished by other investors is a form of contrarian investing. Buying them while they're being punished is financial masochism.

The difference is one of price momentum and its immediacy. Several respected studies, beginning with a landmark 1993 paper by Narasimham Jegadeesh and Sheridan Titman titled "Returns to Buying Winners and Selling Losers," have shown that in the short term, price momentum in a certain direction predicts more of the same. That is, stocks that underperformed last month are more likely than not to do so again this month. Contrarian investors, while looking for past underperformers that now sport alluring valuations and turnaround potential, would do well to look for a touch of recent price momentum, too.

The three companies below were in the bottom 25% of S&P 500 members by share price performance over the past five years but were in the top 25% over the past few months. Each has reported operational improvements lately, and each seems reasonably priced. (more)

Gold futures sold off Friday on concerns China will soon take steps to rein in its inflation and move to increase interest rates.

The contract earlier traded as low as $1,359.30 an ounce, according to FactSet Research.

Gold had lost more than $30 overnight, but seemed to have recovered somewhat at the start of floor trading. Nervous investors, however, pulled the plug on gold after they saw other commodities and stocks selling off.

On the week, gold has lost 2.3%, its worst weekly decline in four weeks and a first drop after two consecutive weekly gains.

If China tightens, it raises the likelihood more countries would follow suit, said Matt Zeman, a trader at LaSalle Futures in Chicago. Gold would lose one of its main engines so far: fear of inflation, he added. (more) 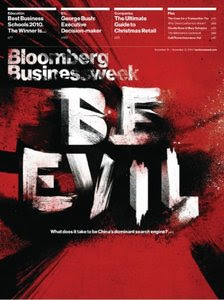 read more here
at 12:05 AM No comments: Links to this post