What's behind the Global Flight into Gold? 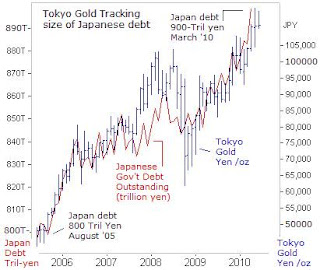 The value of Gold has been subject to intense debate for centuries. Nathan Mayer Rothschild was once the richest man in Britain and probably in the world. His company, NM Rothschild, was appointed as the bullion broker to the Bank of England in 1840 and went on to operate the Royal Mint Refinery in 1852. When asked what the value of the barbaric metal was worth, Nathan used to reply, "I only know of two men who really understand the true value of gold—an obscure clerk in the basement vault of the Banque de Paris and one of the directors of the Bank of England. Unfortunately, they disagree.” (more)
at 12:29 AM No comments:

With gold continuing its climb to record highs, more and more investors are looking to take physical possession of the precious metal.

In the past, most of them were content to bet on gold through futures contracts, shares of funds that buy gold, and shares of gold mining stocks

But now, with fears rampant about the safety of paper assets, many investors feel differently.

"There's much more demand from gold investors for allocated gold," Jonathan Spall, product manager of precious metals at Barclays, told The Wall Street Journal. (more)
at 12:17 AM No comments: 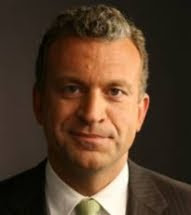 On his afternoon show Tuesday, MSNBC host Dylan Ratigan explained why he believes the usual explanations given in the media for why the stock market went up or down on a given day are nonsense.

"Seventy percent of the volume [of trades on the stock market] is computers that are run by the banks playing ping pong with stocks for 10 seconds at at time," Ratigan said.

"The stock market at this point, which used to be a reflection of the future value of actual businesses in this country, has been turned by our government and our banks into little more than a paper shredding facility [about which] we can make up reasons why it goes up and down," Ratigan said. "But when the computers ... at the banks are controlling the action, most everything else is kind of silly." (more)

Federal Reserve Chairman Ben S. Bernanke and then-New York Fed President Timothy Geithner told senators on April 3, 2008, that the tens of billions of dollars in “assets” the government agreed to purchase in the rescue of Bear Stearns Cos. were “investment-grade.” They didn’t share everything the Fed knew about the money.

The so-called assets included collateralized debt obligations and mortgage-backed bonds with names like HG-Coll Ltd. 2007-1A that were so distressed, more than $40 million already had been reduced to less than investment-grade by the time the central bankers testified. The government also became the owner of $16 billion of credit-default swaps, and taxpayers wound up guaranteeing high-yield, high-risk junk bonds. (more)
at 12:12 AM No comments:

Banks around the world must refinance more than $5 trillion of debts in the coming three years, a massive rollover that poses threats to financial stability and growth.

The need to replace these debts, which are medium and long term, will place pressure on bank profit spreads and in turn may either prompt deleveraging, where banks sell assets that they can no longer economically finance, or simply lead to a bout of credit rationing, where borrowers must pay more to borrow, thus crimping investment and economic growth.

For banks in the UK, according to the Bank of England Financial Stability Report, the refinancings amount to about $1.2 trillion by the end of 2012.

If banks in Britain raise funds at the same pace they have been this year, they will only collect half of their needs in time. This is even before the fact that the banks need desperately to turn some of their riskier short-term funding into more reliable funding with a longer maturity. (more)
at 12:11 AM No comments:

China, the worst-performing stock market after Greece, looks like a buy by almost any measure, according to top-ranked analysts of the Asian nation’s shares.

The Shanghai Composite Index’s 27 percent plunge this year, including yesterday’s 4.3 percent slump, sent its price-earnings ratio to 18, the lowest level versus the MSCI Emerging Markets Index in a decade. The largest owners of yuan-denominated stocks have turned net buyers for the first time since equities bottomed in 2008, while international investors are paying the biggest premium in 21 months to bet on a rally in funds that hold China’s yuan-denominated or A shares, data compiled by Macquarie Group Ltd. and Bloomberg show.

Sales of foreclosed homes in Florida made up nearly 40 percent of all purchases in the first part of this year, a ``terrifying'' statistic, one analyst said, and one that led to deeply discounted prices on distressed properties.

To compare, less than 1 percent of Florida home sales in 2005 were of foreclosed properties, RealtyTrac found.

The report, released Wednesday, defines foreclosure sales as those of homes that are bank owned or where the owners have defaulted on the mortgage and received at least one foreclosure notice. (more)