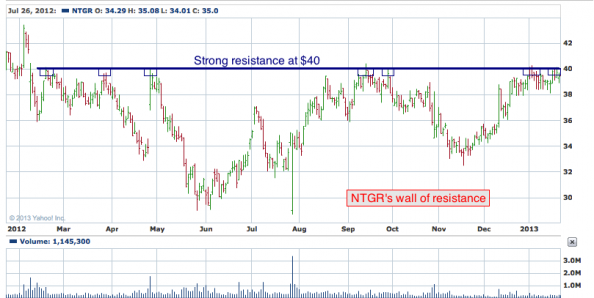 The trade to watch for on NTGR is relatively straightforward. The stock has been hitting a very important level of resistance at $40 (navy) for the entire year. No matter what the market has or has not done over that period of time, NTGR has not been able to break through that area of resistance. If the market rallies much higher NTGR would probably break above that resistance and move overall higher from there.
The Tale of the Tape: NTGR has a key level of resistance at $40. If the stock were to break through that resistance, a long position would be recommended with a stop loss placed below $40.

Many of you have probably filled out one of the "retirement planner" forms available online. Plenty of tax and accounting programs also have "Lifetime Planner" sections for folks to determine if they can afford to retire.

These sorts of programs plug certain assumptions into a formula, such as projected inflation rate, retirement income, anticipated spending levels, and portfolio growth rate. After you add your personal information, it projects how much money you'll be able to produce annually during retirement, and how long it will last.

The first time I ran these numbers, the program said I was good until 116 years of age. At the time, I believed that if we followed the plan as outlined, my wife and I would never have any real money worries. We'd be set for the rest of our lives and could proudly leave some to our children to help with their retirement. How naïve of me!


Things have sure changed a lot since then.

At the time, I'd estimated inflation at 2% and a minimum yield on our portfolio of 6%. In those days, that was conservative. Inflation was lower than 2%, and you could always earn 6% on a top-rated bond or CD.  (more)

With the Fed no longer even pretending it is not all about the stock market, where some mysterious trickle down force is supposed to boost the economy the second the S&P hits new all time highs, and injecting billions into stocks via Primary Dealers courtesy of the daily now-unseterilized POMO (today's edition saw another $3.4 billion enter risk assets), there is apparently no reason to worry about anything. Sure enough, institutions don't need a second invitation to BTFD especially if they can do so on margin. According to the latest NYSE margin debt data, the December of margin debt used for various leveraging activities rose for the fifth consecutive month, reaching $331 billion - the highest since February 2008, when the market was declining, and back to the levels from May 2007 when the market was ramping ever higher to its all time highs which would be hit 3 short months later, and just as the subprime bubble popped. (more)

The American Energy Renaissance has gotten a lot of press. And it should. The prediction that the United States will surpass Saudi Arabia as the world's largest oil and gas producer by 2020 is big news.
But what's truly amazing about this story is that the headlines just keep coming.

Regular readers of StreetAuthority are by now probably familiar with the enormous and expanding reserves of oil and gas that have been discovered in the Bakken Shale of North Dakota, the Marcellus Shale in the Mid-Atlantic region and the Eagle Ford Shale in Texas.
In fact, Scarcity and Real Wealth Editor Nathan Slaughter just gave his subscribers an in-depth analysis of a new discovery in his home state of Louisiana: the Tuscaloosa Shale Formation.
And now another play is ramping up in the West Texas region, a find with so much potential that John Breyer, a geologist and technical consultant for Marathon Oil Corp. (NYSE: MRO), has said it could "dwarf" the reserves already discovered in North Dakota.
"It's like the Eagle Ford on steroids. They haven't even begun. We're just in the toe of this thing," Ken Morgan, director of the Texas Christian University Energy Institute, has said.
It may be hard to imagine that new discoveries are still being made in Texas. After all, the state is practically synonymous with oil barons and energy riches. Companies like ConocoPhillips (NYSE: COP) and Exxon Mobil (NYSE: XOM) are based in Texas, and the first Texas oil well was drilled in 1866.
But with new hydraulic fracturing (fracking) technology, reserves once deemed unreachable are now being recovered.   (more)

Penske Automotive Group, Inc. operates as an automotive retailer. It sells new and used vehicles of approximately 40 vehicle brands; offers vehicle maintenance and repair services; and engages in the sale and placement of third-party finance and insurance products, third-party extended service contracts, and replacement and aftermarket automotive products. As of December 31, 2011, the company operated 320 retail automotive franchises, of which 166 franchises were located in the United States and 154 franchises are located outside of the United States primarily in the United Kingdom. It also has operations in Puerto Rico and Germany. Penske Automotive Group, Inc. was founded in 1990 and is headquartered in Bloomfield Hills, Michigan.
To review Penske's stock, please take a look at the 1-year chart of PAG (Penske Automotive Group, Inc.) below with my added notations: 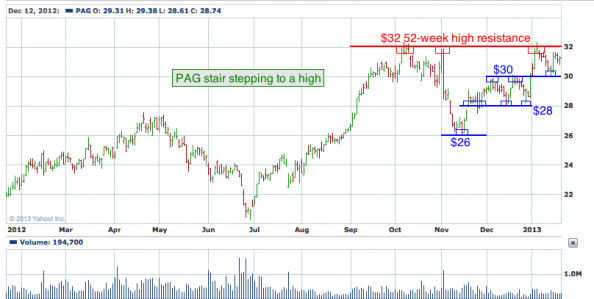 PAG has formed a clear resistance at $32 (red), which would also be a 52-week high breakout if the stock could manage to break above it. In addition, the stock has been climbing the $2 increments (blue) over the last (3) months. Starting from November you can see the bounce on $26, then $28 after that, and now $30. PAG appears to find each increment of $2 as important.
The Tale of the Tape: PAG is stepping higher on the 2's towards its 52-week resistance at $32. A long trade could be made on a breakout above the $32 resistance or on a pullback down to the $30 level. A break below the $30 would be an opportunity to enter a short trade.

Crude oil has been trading ways for the past year between the 2011 high and low. The trading range through 2012 has been contracting with a series of lower highs and higher lows. This pennant formation because it is taking place after an uptrend is a bullish pattern with $110 and possibly even $140+ per barrel in the next 6-18 months.
If you look at the weekly investing chart of crude oil the key support and resistance levels area clearly marked. A breakout of the white pennant will trigger a move to the next support or resistance level. And judging from the positive economic numbers not only form the USA but globally the odds are increased for the $110+ price target to be reached sooner than later.

If we zoom into the daily chart and analyze price and volume you will notice the $100 per barrel level is potentially only 2-3 days way… But keep in mind whole numbers (decade & Century Numbers) naturally act as support and resistance levels. So when the $100 century price is reached there will be a wave of sellers with fat thumbs who will slam the price back down to the $96 and possibly back down to the $92 level before oil continues higher.

The utility sector has done well and continues to look very bullish for 2013. This high dividend paying sector is liked by many and the price action speaks for its self

Energy stocks which can be followed using the XLE exchange traded fund (ETF) typically leads the price of oil. Looking at energy stocks we can see that they are outperforming the price of crude oil and on the verge of breaking out of a large Cup & Handle pattern. If so then $90 is the next stop but prices may go much higher in the long run.

Once a breakout takes place on either the white or yellow lines on the first crude oil weekly chart we should see oil, energy and utility stocks start making some big moves. Depending on the direction of the breakout (Up or Down) it must be played in that direction to generate substantial profits obviously.