By the end of the third quarter of fiscal 2012, the new debt accumulated in this fiscal year by the federal government had already exceeded $1 trillion, making this fiscal year the fifth straight in which the federal government has increased its debt by more than a trillion dollars, according to official debt numbers published by the U.S. Treasury.

Don Coxe – The Global Situation Is Becoming Quite Desperate

With stock markets trading in the red around the world, today King World News interviewed 40 year veteran, Don Coxe. Coxe told King World News, “The situation (in Europe) has gone from worse to truly awful in the last week.” He also warned that “… by the end of the summer we might be facing two of the PIIGS going into default.”

Coxe, who is Global Strategy Advisor to BMO ($538 billion in assets), also spoke about the drought, which has been one of the worst in the past century: “It’s going to mean that the winter is going to be a much more chilling experience for the consumers because there is no question that food prices will be, by then, meaningfully higher.”

Coxe also discussed gold, but first, here is what he had to say about the severe drought: “This is one of the three biggest droughts of the last 100 years. In the regions where it is established, it’s been brutal. Those farmers who do not have irrigation equipment, in most cases, are just going to have to plow their crops under.”

Don Coxe continues @ KingWorldNews.com
at 12:07 AM No comments:

Watch the morning video or at least the last 4 minutes where I cover the SP500 intraday and daily chart which shows the main cycles and what we should be expecting within the coming days and weeks.

Pre- Market Analysis Points:
- Dollar index is making new highs this morning and if it can hold up into the close today then I would expect it to keep running higher for a few weeks.
- Oils has pulled back 5% from its high last Thursday and is now testing support and starting to bounce.
- Natural gas is holding up well after Friday’s strong rally to new highs. It may be forming a bearish pattern with the three sharp surges to new highs pattern which I explain in the video.
- Gold and silver trader trading down 1+% and are likely to find a little support today as they test support levels. They are at risk of a major breakdown but currently they are still holding up.
- Bonds are reaching new highs this morning but looking ready for a 1-3 day pause. They are a little overbought.
- SP500 charts have been the most interesting the past couple months which is why I keep focusing on it.

Watch Video Now:
The video clearly explains where the market seems to be trading in terms of cycles and what we should expect this week and in the coming month.

The Tale of the Tape: AIG has formed a small Rectangle pattern. The possible long positions on AIG would be either on a pullback to $30, or on a break above $32.50. The ideal short opportunity would be on a break below $30, but a short could also be placed on a rally up to $32.50. 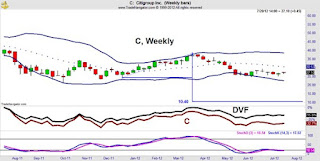 Looking for a potential short trade? You'll find it in the financial sector.

If the sovereign debt crisis worsens, it could have a big impact on banks. European leaders will soon hold another summit, and it is likely that Italy will be the subject of this round of negotiations. However, it's also possible that Spain or Greece will go into crisis mode again.

Another problem facing banks is the LIBOR scandal. It has not yet been determined who is involved in falsely reporting interest rates or what the penalties will be for banks that did participate in this practice, but this is another weight hanging over the heads of big banks.

Finally, we have the issues of a sluggish housing market and an economy that is struggling to maintain growth.

In addition to a poor operating environment, individual banks each have their own problems. And while no one except the bankers themselves knows the extent of these problems, you can see why this sector makes a potential target for a short trade.

This Gold Investment Could Gain More Than 35%

Gold has gone nowhere for months, but I think it is about to make a big move. And I have an investment for you that will allow you to profit double gold's move.

Many traders have strong opinions about gold. Some argue that it is the ultimate inflation hedge and a vital part of any balanced portfolio. Others believe it is a worthless metal. This is the view that Warren Buffett colorfully took in his most recent shareholder letter.

Buffett pointed out that if you put all the gold in the world into a cube, each side of that cube would measure about 68 feet across. You could then drop that cube into an area that's smaller than the infield of a baseball field.

Now you would have a valuable cube, worth about $10 trillion at recent market prices, but Buffett added that your golden cube would produce nothing in the future -- no interest, no dividends, no earnings.

Instead of a gold cube, Buffett said you could take that $10 trillion and buy all of the farmland in America for $400 billion, plus 16 companies with a market cap equal to Exxon Mobil (NYSE: XOM), and still have more than $1 trillion in cash. Over the next hundred years, these investments will deliver trillions of dollars in earnings.

Buffett's logic is hard to argue with. Gold has no value other than what a trader is willing to pay for it. And right now, the chart says traders are not willing to pay a higher price for gold. Maybe they prefer to buy farmland instead to take advantage of record-high grain prices. Or perhaps they want to own large-cap stocks. The chart doesn't tell us what they are buying, it just tells us that now is a great time to short gold.

Since reaching a high of $185.85 in September 2011, the SPDR Gold Trust (NYSE: GLD) has been forming a descending triangle. The downsloping trendline from the September high shows the general direction of the trend, and the bottom of the triangle defines support near $150 a share.

Since May, GLD has been confined to a very narrow trading range. The bulls might argue that the support is holding and an upside breakout is coming. I believe the stronger argument is that the bulls cannot push prices up and support will break very soon. Every time a rally has started, it has been brief and the price has been unable to move much above $150. That shows us there are more sellers on rallies, which is bearish for GLD.

The descending triangle is an obvious pattern on the chart, and many traders have noticed it. When it breaks, panic could set in, in which case, selling will quickly push the price of GLD down to the target at about $115. This target is the difference between the top of the triangle and the base, subtracted from the base.

This would be a major move in gold, and while it might seem unrealistic for gold to fall to about $1,150 an ounce, big moves are normal in this volatile commodity.

Fundamentally gold has no value, as Buffett so wonderfully explained, and it trades largely as an inflation hedge. Inflation has been low for years, and fears over an inflation spike because of the drought seem overblown. Food accounts for less than 8% of the U.S. Consumer Price Index, and even a doubling of grain prices will have only a small impact on overall inflation. Consumers in other countries spend more of their income on food, but food inflation often leads to spending cutbacks in other areas and overall inflation remains subdued.

Without inflation, the remaining fundamental driver of gold prices is jewelry demand. A slow growing economy should hold down demand for jewelry, so the technical target of $1,150 an ounce now seems to make sense based on fundamentals as well. Gold could easily fall more than 20% from recent levels without inflation in a slow economy.

Traders can establish short positions in gold with the PowerShares DB Gold Double Short ETN (NYSE: DZZ). The 26-week moving average should be used as a stop, and with a technical target of $6.91, the trade should deliver a gain of more than 35%.

Once again, the week closed with a big move on Friday, but this week it was a down move. Analysts attributed the day's drop to riots in Spain, but it is also likely that a slowing U.S. economy has something to do with the stock market weakness. Watch for more downside risk in the week ahead.

Almost 60% of companies that reported second-quarter earnings so far have missed revenue projections. Analysts see soft sales growth for at least the next two quarters. Earnings require sales, and if the current trend continues as expected, stocks should suffer a significant decline by the end of the year.

I'm bearish on stocks, but some would argue the market is moving higher and that must be bullish. My counterargument is simply that I'm early. This can be a dangerous position, but history is on my side and volatility shows us that the next major move in the S&P 500 will be to the downside.

Some traders use the CBOE Volatility Index (CBOE: VIX) as a way to measure market volatility. This index spikes higher on market declines and can offer timely buy signals. There are a number of trading strategies that can be developed with VIX, and I'll cover some in the future. For now, I want to look at another measure of volatility that has correctly forecast 100% of the market's drops in the past five years and offered timely entries at the end of the decline: the Average True Range (ATR). (more)