Each year, the Miles Franklin Blog publishes its forecast of key trends for the coming 12 months.  Note the word trends; as we long ago gave up on predicting specific market levels.  To wit, paper financial markets have become so hopelessly, relentlessly rigged, that the factors we’ve spent a lifetime analyzing – i.e., fundamental and technical – have become useless over short-term periods such as a year; let alone, a month.  In fact, technical analysis may have been permanently disabled by government intervention; which frankly, utilizes’ traders “chart reading” as a weapon against them.  Conversely, we feel more confident than ever about discussing the PHYSICAL markets that underlie them; specifically, gold and silver.
Again, such predictions will not involve specific numbers or timeframes.  Instead, they will simply focus on the projected “top economic stories” of 2014, particularly as they relate to Precious Metals.  And thus, away we go!
1. Worldwide interest rates will continue to rise, led by the United States.  This trend commenced when “taper talk” commenced in mid-2013; in effect, validating the worst bond market fundamentals of our lifetimes.  And if rates do indeed rise, NOTHING will be spared from the ensuing financial nuclear destruction.  Nothing, that is, but real money.  As we wrote in September, the entire world is irreversibly addicted to ultra-low interest rates; and thus, even the tiniest rate increase will be catastrophic.
In the U.S. alone, a miniscule increase in the benchmark 10-year Treasury yield – from 1.6% to 3.0% – has already caused new mortgage applications to plunge to a 13-year low; and given the government itself admits “housing” accounts for roughly half of all GDP growth these days, no amount of BLS, BEA, or other statistical lies will be able to mask the fact that the economy is in the verge of freefall.  To illustrate just how distortive the Fed’s “QE” program has been, today’s 10-year Treasury of yield, amidst a $17.3 trillion, rapidly expanding national debt, is still more than 50% below the 60+ year average of 6.57%.

READ MORE
Please share this article
at 12:05 AM No comments:

These Biotechs Have Up To 100% Upside In 2014: Regulus Therapeutics (Nasdaq: RGLSD), Threshold Phama (Nasdaq: THLD) and Synergy Pharma (Nasdaq: SGYP) 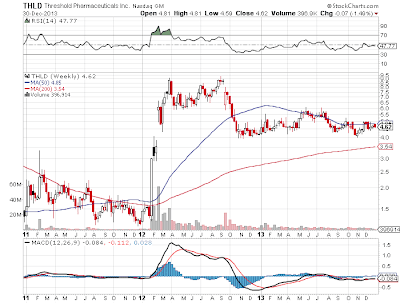 Although almost any market action can be explained away -- in hindsight -- some trends will remain a deep mystery.
​ Major biotech stocks rallied sharply throughout 2013, as I noted in this column, but smaller biotechs inexplicably sold off sharply after Labor Day. My view: In the absence of any clear explanation of why smaller biotechs should suddenly fall deeply out of favor, lower stock prices should lead investors to give these stocks a fresh look.

Indeed, that scenario played out as expected. Since my mid-November profile of Regulus Therapeutics (Nasdaq: RGLSD), Threshold Phama (Nasdaq: THLD) and Synergy Pharma (Nasdaq: SGYP), these three stocks have rebounded, 24%, 12% and 31% respectively. That's an impressive six-week rally, and likely signals that this out-of-favor sector is rotating back into favor. I think these three stocks remain undervalued and will be tracking them in the year ahead.  (more)

Here are Gartman’s top trades for 2014

With the new year just a few hours away, the world wants to know what Dennis Gartman, editor and publisher of The Gartman Letter, is predicting for 2014.
Gartman spoke Talking Numbers with his three top predictions for this coming year.


1. Buy English-speaking currencies against the Japanese yen
Gartman believes the Japanese yen will do worse against the US dollar, the British pound, the Canadian dollar, the New Zealand dollar, and the Australian dollar. Gartman says: "The yen is under duress and will continue to be under duress. The monetary authorities want it to weaken. And, I think the English-speaking currencies, with their respect for tradition and the rule of law, is where flight capital will tend to move. So, I want to be long the English-speakers. I want to be short the yen."

2. Buy the Nikkei against the S&P 500 index
Gartman says: "I think over the course of the next several years, the Nikkei will seriously outperform the other broad market indices around the world. Again, that's predicated on a weak Japanese yen. The monetary authorities are going to do what they can to sponsor that strength." (more)

Terrifying Tsunami To Rip Through Global Markets In 2014

kingworldnews.com / December 30, 2013
As the year 2013 comes to a close, today James Turk warned King World News that a terrifying tsunami is going to rip through global markets in 2014 with disastrous consequences.  Turk takes KWN readers around the world on a trip down the rabbit hole in his powerful interview below.
Turk:  “The yield on the 10-year T-note is about to hurdle above 3%, Eric.  Imagine what is going to happen to yields when the Federal Reserve begins its so-called tapering in January — buying $10 billion less government debt each month.  The demand for that debt will only appear at higher yields….
READ MORE
Please share this article
at 12:03 AM No comments:

How Oil Could Influence the 2016 Presidential Election