Felix Zulauf – The World Monetary System Is Going To Collapse

kingworldnews.com / April 25, 2014
Today renowned money manager Felix Zulauf warned King World News that the world monetary system is going to collapse.  Zulauf, founder of Zulauf Asset Management and 20+ year Barron’s Roundtable panelist, also discussed how all of this will impact major markets, including gold.  Below is what Zulauf had to say in the first of a series of powerful written interviews that will be released on King World News.

Eric King:  Will the key (to surviving) this (end game), as you warned many, many years ago, be to be outside the banking system?”

Zulauf:  “Absolutely.  The banks are the worst money managers of this world.  I don’t blame them because they are the receivers and transmission mechanism for all the money being printed by the central banks.  They are flooded with cheap or gratis money.  They have to do something with that money, so they go into carry trades.  You can look back in history.  It started with Citicorp being trapped in Mexico.  It goes on and on and on, and they are in carry trades again.
And when you look at the quality spreads between junk bonds and Treasuries, we are back to the extremes of 2007, at the last cycle peak….
READ MORE

A million dollars…
Wow, seems like a lot of money doesn’t it?
Everybody would love to become a millionaire, retire without a worry and spend the rest of your days on earth having fun….
There’s just one major problem: $1 million dollars is the new middle-class. Do you have it in an IRA? Well, the government might be interested in confiscated it. In a domestic bank account? Well, legislation has been written legalizing a possible future bail-in. Some of the retirement money sitting in your account could be shaven drastically. That’s what has happened in Cyprus. How about a devaluation? That’s what the people of Ukraine are suffering through as I write.

In 1953 the movie “How to Marry a Millionaire” was out in theaters. $1 million back then bought the equivalent of $8.7 million today (based on manipulated government numbers, which means it actually buys much less). $1 million won’t even buy an average apartment in Manhattan today!
Why isn’t $1 million worth that much anymore? Inflation. The Federal Reserve is printing billions of dollars every single month! Ultra low interest rates in bond markets have also contributed.
Unfortunately for US citizens, they will be the victims of a crisis which is only going to get much, much worse. People don’t have the money to start saving in the first place. They’re too busy keeping up with an extravagant and over-inflated lifestyle, taxes, fines and what have you not. On top of that, the United States has chosen a geo-political strategy that has led the rest of the world want off the US dollar. They don’t want to use it anymore. China is buying lots of gold. Russia is threatening to abandon the dollar altogether.
READ MORE

Two Sectors to Short in This Bounce

The stock market fired a warning shot earlier this month.
After setting a new all-time high above 1,894, the S&P 500 dropped 80 points – roughly 4.2% – in just two weeks. This fast downside action is just a small sample of what may happen when the stock market finally enters a correction phase.
But we're not there yet. As I said last week, the old bull market still has one more kick left in it. And the recent bounce is giving traders a chance to cash out on some long positions and make a short trade or two.
You see, the bounce is ending. As I told you on Tuesday, we're coming up on a seasonally weak period for stock prices. And there are two sectors in particular that look vulnerable for a decline...
Let's start with real estate. Here's a chart of the iShares U.S. Real Estate Fund (IYR)... 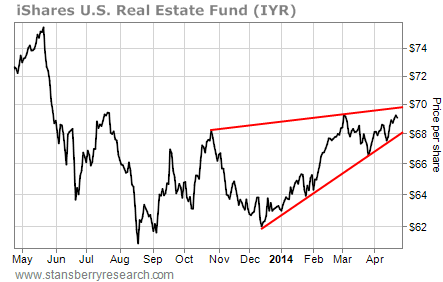 For the past six months, IYR has been trading in a bearish rising-wedge formation. In this pattern, a stock makes consistently higher highs and higher lows but the distance between each new high and low is smaller. Eventually, the stock has to break out of the pattern one way or another. When that happens, it usually results in a big move.  (more)
Please share this article
at 12:04 AM No comments: Links to this post

Billionaire-entrepreneur and founder of Sprott Asset Management, CEO Eric Sprott says the official economic numbers are bogus; most people realize they are paying more for life’s necessities than reported. Even after spending trillions of taxpayer dollars, the Fed has accomplished little other than put the US further into debtor’s prison. Last week, the EU put savings accounts with over 100,000 Euros at risk of confiscation – Eric Sprott says that investors across the pond should be bracing for something similar, unless of course savings are held in physical bullion, coins and bars. But tarry not, according to his research physical demand for gold exceeds global mining output; one nation (China) is consuming all of the gold produced in the entire Western world. Bank trading desks combine their financial clout with the leverage facilitated by paper contracts to manipulate the precious metals markets with impunity. He shares a recent headline story of a homeowner who found a container of gold coins in the backyard worth $30,000 when buried, now worth $10 million, illustrating the safe haven qualities of the yellow metal.
Click Here to Listen

To Whom Does the U.S. Government Owe Money?

On Tax Day 2014, the U.S. federal government owed its lenders over $17.577 trillion. Our chart below reveals who Uncle Sam's biggest creditors are:

Click for a larger image
The biggest surprise in this edition of our chart (compared to the previous edition) is the appearance of Belgium on the list, which jumped ahead of several other nations by more than doubling the amount that is being lent to the U.S. government from the small European nation over the last six months. Since Belgium is a major international banking center, what this really represents is the accumulation of U.S. debt by other foreign entities through Belgium's banks in much the same way as London's banks have historically served this role for countries such as China.
Here though, it appears that Russia-based interests may be behind the apparent surge in the nation's holdings of U.S. government-issued debt, with the driving factor being the desire to avoid losing access to the holdings from economic sanctions. Much of the increase in holdings through Belgium took place in the several months preceding Russia's 23 February 2014 actions to seize control of the Crimea peninsula from Ukraine, which indicates the very premeditated nature of the action.
Meanwhile, the U.S. Federal Reserve continues to accumulate the share of the U.S. government's debt, having gone from accounting for 1 out of every 8 dollars lent to the U.S. government to now account for nearly 1 out of every 7 dollars.

Head and Shoulders Pattern in the Nasdaq

Since everyone is now starting to talk about this potential head and shoulders pattern, I figured I’d weigh in. First of all, looking for reversal patterns in general is a losing proposition as markets historically move in trends. Right now the trend in the Nasdaq is and has been up, so potential reversal patterns usually fail. With that said, it would be irresponsible of us not to recognize a potential pattern when it appears.
A month ago I put out a bearish note on the Nasdaq, where I explained why it was such an easy short entry. The risk/reward was perfect for the bears. So far this is working out nicely, but a bigger, more important topping pattern is starting to develop. Patterns with larger market implications take longer to build (see here). So far we’re going on 6 months of construction work for this price pattern. That’s not good.
Here is the daily candlestick chart for the Nasdaq100 $QQQ. There’s a reason people are starting to talk about this Head and Shoulders. The left shoulder is easily recognizable, the higher high representing the head rolled over nicely and found support at that neckline that’s held since December, and now a weak right shoulder is beginning to emerge: 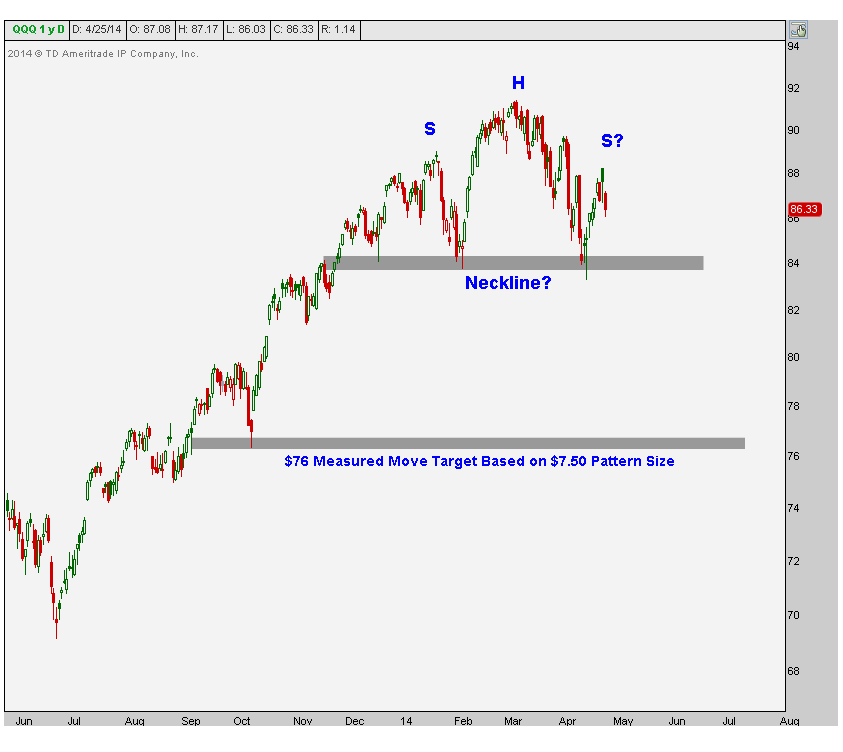 It’s still too early to know for sure if this is exactly what’s happening in the Nasdaq. The confirmation technically doesn’t come until prices break below the neckline. We’re still 3% away from there. In addition, the market doesn’t make it very easy on us. Way too often, we see brief new lows below necklines that then reverse and rip in your face. So if you do get that confirmation, and you’re following this pattern, you really only want to be short below the neckline. $76 looks like a solid initial price target in that case as it represents the $7.50 measured move based on the size of the reversal pattern.
In general, I don’t think it’s advantageous to search for patterns like this. But when they appear and confirm, they can provide some extremely violent moves. Look at the top for the S&P500 and Dow Industrials back in 2007; text book stuff.
Please share this article
at 12:03 AM No comments: Links to this post