Bank On PayPal $PYPL Upside With This ETF: $IPAY 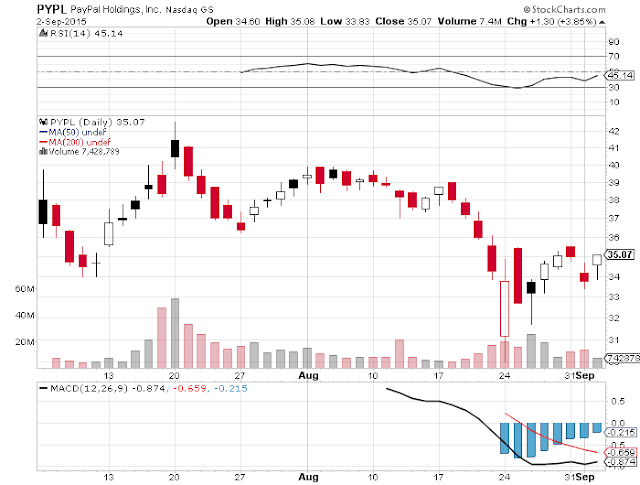 PayPal Holdings Inc PYPL is less than three months removed from its separation from eBay Inc EBAY , but that has not prevented PayPal from finding its way into more than 50 exchange traded funds.
ETF allocations to PayPal range from token, or mere tenths of percentage points, to solid with solid being found in the form of the newly minted PureFunds ISE Mobile Payments ETF IPAY. Having debuted in mid-July, IPAY came to market several weeks after eBay spun PayPal off, but the ETF was one of the first to include shares of PayPal. IPAY entered Wednesday with a 5.4 percent weight to the stock, making PayPal the ETF's fourth-largest holding, according to issuer data.
Although shares of PayPal have struggled alongside the broader market since the spinoff, Wall Street is generally bullish on the stock with some analysts forecasting significant upside for the shares. That upside, assuming it arrives, would undoubtedly be a positive catalyst for IPAY.

“PayPal has grown its average active account size to $1,411 in 2014 from $851 in 2008—roughly 9% per annum, according to estimates by Bill Carcache, an analyst with Nomura Securities, who thinks the stock is worth $46, or about 40% above last week’s level,” reported Barron's on August 29.
On July 20, three sell-side analysts initiated coverage on PayPal with targets of $45, $45 and $48, according to Benzinga data. Those targets imply significant upside from the $34.40 area at which the stock was trading at time of writing.
Two days later, Citigroup, citing PayPal's massive cash hoard, among other factors, initiated coverage of the stock with a Buy rating and a $47 target.
According to the Citi report, "Other financial metrics are strong and PayPal "starts" life with ~$6 billion in net cash as a result of its spin from EBAY. There are some clear positives with regards the investment case for PYPL (see below) but there is also a high level of uncertainty."
IPAY follows the ISE Mobile Payments Index. That index “tracks companies at the forefront of the mobile, electronic, and digital payments industry,” according to a statement from PureFunds. “The recent shift in the payments industry has been the transition away from the traditional payments methods and into mobile methods. It is commonly held that consumer spending accounts for approximately two thirds of U.S. Gross Domestic Product (GDP) which in real terms equates to roughly $11.5 trillion."
Like PayPal, IPAY has trended lower with broader indexes since coming to market. The ETF is off almost 7.7 percent since its debut, but there is a caveat. IPAY has outperformed the Nasdaq Composite, the Financial Services Select SPDR XLF and the Technology Select Sector SPDR XLK  since its debut.

After a huge price surge from $600 to $760, Chipotle (CMG) shares retraced to a critical “Make or Break” daily and weekly chart trade planning level.
From there, shares are compressing into a clearly defined support and resistance range.
Let’s update these levels and note the price pathways going forward for this high-flying stock: 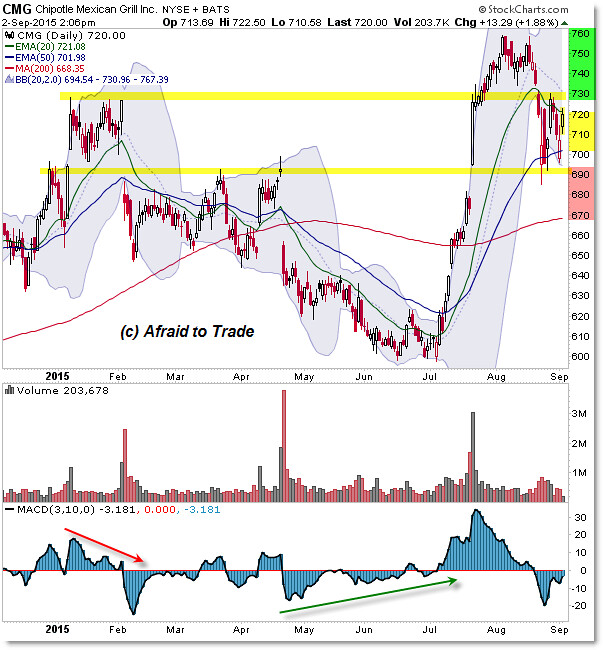 A lengthy positive momentum divergence preceded the bullish breakout and immense surge higher in July.
From there, price stalled above the $730 prior high, retracing (reversing) down against $760 per share.
From there, price fell all the way to the critical $690 and $700 per share retracement target. (more)
at 12:03 AM No comments: Links to this post

As the market got hit hard on Tuesday, there are some broken charts, but still some outperformers as well. Here are two longs and two shorts to watch.