Hyperinflation Has Arrived In Iran

Since the U.S. and E.U. first enacted sanctions against Iran, in 2010, the value of the Iranian rial (IRR) has plummeted, imposing untold misery on the Iranian people. When a currency collapses, you can be certain that other economic metrics are moving in a negative direction, too. Indeed, using new data from Iran’s foreign-exchange black market, we estimate that Iran’s monthly inflation rate has reached 69.6%. With a monthly inflation rate this high (over 50%), Iran is undoubtedly experiencing hyperinflation. The rial’s death spiral is wiping out the currency’s purchasing power
Read More @ ZeroHedge.com

Warnings That A Massive Stock Market Crash Is Imminent

from The Economic Collapse Blog:

In the financial world, the month of October is synonymous with stock market crashes. So will a massive stock market crash happen this year? You never know. The truth is that our financial system is even more vulnerable than it was back in 2008, and financial experts such as Doug Short, Peter Schiff, Robert Wiedemer and Harry Dent are all warning that the next crash is rapidly approaching. We are living in the greatest debt bubble in the history of the world and Wall Street has been transformed into a giant casino that is based on a massive web of debt, risk and leverage. When that web breaks we are going to see a stock market crash that is going to make 2008 look like a Sunday picnic. Yes, the Federal Reserve has tried to prevent any problems from erupting in the financial markets by initiating another round of quantitative easing, but 40 billion dollars a month will not be nearly enough to stop the massive collapse that is coming. This will be explained in detail toward the end of the article. Hopefully we will get through October (and the rest of this year) without seeing a stock market collapse, but without a doubt one is coming at some point. Those on the wrong end of the coming crash are going to be absolutely wiped out.
Read More @ TheEconomicCollpaseBlog.com

Get This Triple-Digit Gainer for a Bargain-Basement Price


Handbag and accessory maker Coach (NYSE: COH), one of the best-known names in high-end fashion, has also been one of the best-performing stocks in the bull market that started in 2009. From its bear market lows, COH gained 599% before peaking in March.
Since then, the stock has pulled back and is trading 30% below its all-time highs. The chart below shows that the price could be headed even lower in the short term.

Despite the stock's recent struggles, Coach is still a great company for the long term. And at the right price, this stock is a buy. But right now it looks like it is a little too early. I think the holiday shopping season could lead to an additional sell-off in the stock that would push COH shares down to where I would like to buy them.
As you can see in the chart below, since COH peaked, competitor Michael Kors (NYSE: KORS) has been a market leader. The two companies are competing for many of the same customers, a demographic group that marketers call "aspirational consumers" who have limited discretionary income but want high-quality products. If KORS sees strong sales this holiday season, that revenue could come partly from customers choosing Michael Kors products over similar products that are available from Coach. But these customers often rotate between brands, and eventually they should return to Coach.  (more)

Rick Rule – The Availability Of Physical Gold Will Disappear

Today Rick Rule told King World News “At some point we will see the availability of physical gold disappear when we begin to see widespread public ownership like we witnessed in the 1970s.” Rule, who is now part of Sprott Asset Management, also noted that “… gold will do well because the value of currencies will continue to erode.”
Here is what Rule had to say: “It was a nice catch by Michael Pento the other day on KWN, and I suspect he’s exactly right that we are looking at QE4. It seems to me that regardless of the excuse, the Fed will find ways to add liquidity into the system for a couple of reasons. First, they feel the desperate need to keep the system, at least a big part of the system, liquid, in order to avoid a 2008 style decline.”
Continue Reading at KingWorldNews.com…
at 12:04 AM No comments: Links to this post

US Airways Group, Inc., through its subsidiaries, provides air transportation for passengers and cargo. It offers scheduled passenger service on approximately 3,100 flights daily to 200 communities in the United States, Canada, Mexico, Europe, the Middle East, the Caribbean, and Central and South America; and hourly shuttle service between Boston, LaGuardia, and Washington National. The company operates hubs in Charlotte, Philadelphia, and Phoenix; and a focus city in Washington, D.C. at Ronald Reagan Washington National Airport. As of December 31, 2011, it operated 340 mainline jets supported by its regional airline subsidiaries and affiliates operating as US Airways Express, which operated 233 regional jets and 50 turboprops. US Airways Group, Inc. was founded in 1981 and is headquartered in Tempe, Arizona.

To review US Airways's stock for potential trading opportunities, please take a look at the 1-year chart of LCC (US Airways Group, Inc.) below with my added notations: 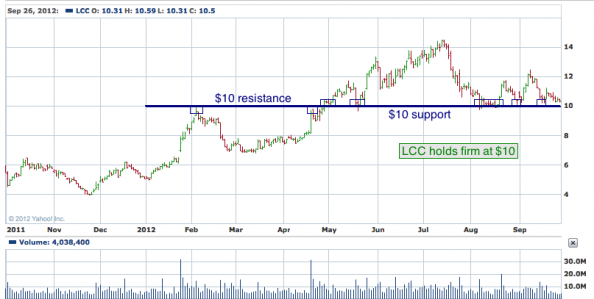 LCC caught my attention due to the one basic price level at $10 (navy). Not only is the $10 resistance clearly visible from February thru April, but $10 has also been a strong area of support since the beginning of May as well. So, the $10 price level is key to this stock. All tests of LCC's $10 support have gained at least a 10-20% run up
at 12:03 AM No comments: Links to this post

goldnews.bullionvault.com / By Adrian Ash
DOLLAR Gold Prices put on 7.7% in September, and hit new all-time highs against the Euro and Swiss Franc, writes Adrian Ash, head of research atBullionVault.
So who’s doing the buying, and driving prices higher? New data we released today here at BullionVault show that private households are continuing to join the bull market.
But the response by retail investors to both QE3 and the latest phase of the Eurozone crisis is more measured – some analysts might say complacent, even – than the recent price action alone might suggest. 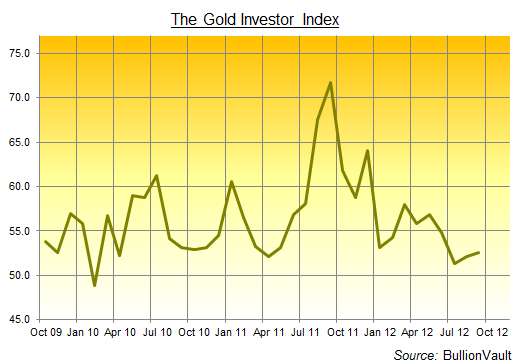 BullionVault‘s new Gold Investor Index provides a unique  window onto private-investor sentiment towards physical gold. The prompt came from our contacts and colleagues in the wholesale professional market – dealers and traders who are always happy to share their views and opinion, but who have been asking us what we’re seeing on our own peer-to-peer exchange, used by 42,000 private investors from 159 countries.
So the Gold Investor Index is a monthly data point, based on actual trading on BullionVault, the world’s largest provider of physical gold ownership to private investors. Almost 90% of its users live in the UK, US or Eurozone. Our Gold Investor Index shows whether more of those people are buying or selling gold, or choosing to sit tight.
READ MORE