Man Who Predicted Gold Takedown Says West Is In Danger

In the aftermath of the takedown in gold and silver, today the man who predicted this downside action ahead of time spoke with King World News about what investors should expect next. William Kaye, who is one of the savviest and most well-connected hedge fund managers in the world, also told KWN exactly why the plunge is being orchestrated and what will emerge from all of this. Kaye, who 25 years ago worked for Goldman Sachs in mergers and acquisitions, had this to say in his fascinating interview.
Kaye: “I’m focused on the footprints which strongly suggest that the gold cartel isn’t done yet. I continue to see the cartel making strategic moves at the PM fix in London. The PM fix is a critical time when countries like China show up to buy sizable amounts of gold….
Continue Reading at KingWorldNews.com…
Please share this article
at 12:07 AM No comments: Links to this post

This Indicator Is Pointing to a Market Rally

Fear is in the air. The Volatility Index is spiking higher. Washington is shut down. And the country is approaching its debt limit. It's no wonder stocks are falling.
After hitting an all-time high of 1,725 three weeks ago, the S&P 500 has tumbled 4%. Analysts and television talking heads are jumping over themselves, making predictions that stocks have further to fall.
But there's one indicator that suggests stocks are ready to bounce higher...
Take a look at this chart of the NYSE McClellan Oscillator (the NYMO) plotted with its Bollinger Bands... 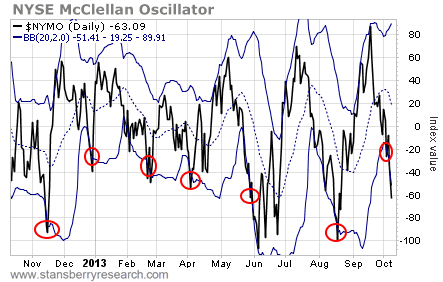 The NYMO is an indicator of overbought and oversold conditions. Bollinger Bands help to indicate extreme moves on the chart.
Bollinger Bands measure the most probable trading range for a stock or an index. So whenever the NYMO moves outside of its Bollinger Bands, it indicates an extreme move – one that is likely to reverse.
The red circles on the chart show each time the McClellan Oscillator dropped below its lower Bollinger Band within in the past year.
Here's how those circles line up with the action in the S&P 500... 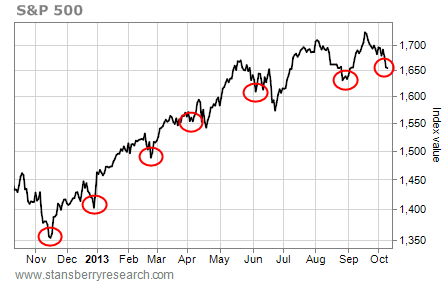 After every drop, the S&P 500 rallied immediately. Some of the rallies – like the one in April – were short-term and only lasted a few days. But the gains were there if you were quick enough to take them.
The McClellan Oscillator closed Tuesday at -63.65. That's a mild negative reading compared to what it reached at the August and November bottoms. So any rally off this level will likely be mild – maybe only 30 to 40 points.
Of course, nothing in the financial markets is ever guaranteed. And stocks may keep falling in spite of the oversold reading. But history is suggesting the market is gearing up for a bounce.
Please share this article
at 12:06 AM No comments: Links to this post

The 7 Critical Economic Indicators You Need To Check Every Morning

Everyone has a different opinion on how best to take the measure of the markets and the economy at large.

Hairs standing up on end, a knee that aches with the weather, tea leaves, earnings estimates, the Hindenburg Omen - it seems like all of these are significant in some way at one time or another.

Here at Money Morning, it's no different. We have an editorial meeting each and every morning - rain or shine - where the editors and writers huddle to pitch the stories and reporting we bring you every day. The meeting covers a huge range of financial and policy topics, and ideas of all stripes are kicked around and discussed until a solid story emerges.

A few days ago, we talked about important financial and economic indicators, where each of us turn to get some idea of the health of the markets and economy. Someone asked, "What's the number you look at first ever day?" We all answered in turn, and a really interesting collection of ideas began to emerge - as it always does.  (more)

Yen may be easiest of upcoming currency trades

Successful trading doesn’t require that you know where the market will go. It depends a great deal more on recognizing high-probability set-ups, where entries are optimal and the risk of loss is well defined (and hopefully small). That’s why the current picture of the Dollar/Yen market is such a gift. The consolidation pattern that has lasted through the spring and summer appears nearly complete, and the currency pair is poised to break out in what should be a strong move. There’s also a clear line to indicate where the trade would be wrong, thus defining the risk.
Beginning just a few days after the October 2011 high in the Yen (NYSEARCA:YCL, NYSEARCA:YCS), we have charted and traded its progress downward. The monthly chart below shows how the powerful downward wave of 2012-13 halted when it first found support at the edge of the channel. That also coincided with the beginning of upward cyclical pressure. After it found support, then Yen moved into what appears to be a triangle pattern, which typically (but not always) breaks in favor of the continuation trade. The next phase in the 11-month cycle also favors continued downward movement. 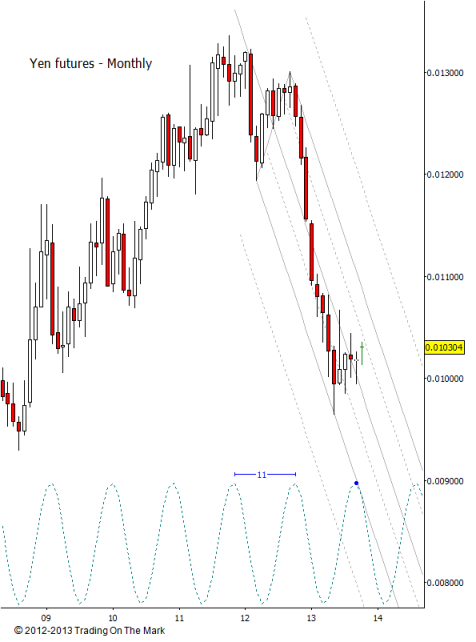 The triangle is easier to see on the weekly chart. If it is going to behave as an Elliott Wave triangle and break downward, then the current advance labeled as wave ‘e’ cannot exceed the previous high labeled as wave ‘c’. This chart is an excellent example of why triangle trades can present the best opportunities for optimal entry and placement of stops.
Note also that the commodity channel index at the bottom of the weekly chart is testing the zero-line from below. The indicator is confirming that the present area as a decision point. If the indicator were to pull away from the zero-line, it would support the bearish continuation scenario.
Initial targets lower would include 0.009575 and 0.009082. 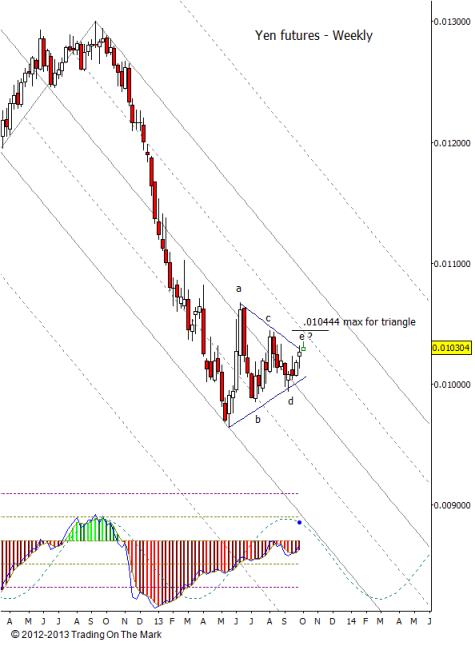 One of my all-time favorite companies is selling off right now...
And I'm not worried a bit about it falling much more.
How can I be so confident in saying this stock won't plummet?
Because people like income. They like dividends. And they like safety. That's what this small-cap stock – and a handful of others like it – provides.
The stock I'm talking about is Diebold (DBD). And while you probably haven't heard of the company, it's one of the world's best dividend-paying stocks.
Diebold is the world's No. 1 supplier of automatic teller machines (ATMs) . It's also a leading supplier of security products, like bank vaults and safes. It's a 150-year-old company. And it has increased its dividend payment every year for 59 years, which is the longest streak of any company in North America.
Over the last few months, Diebold has dropped about 15% from its highs. But I don't expect the selloff to continue for much longer... 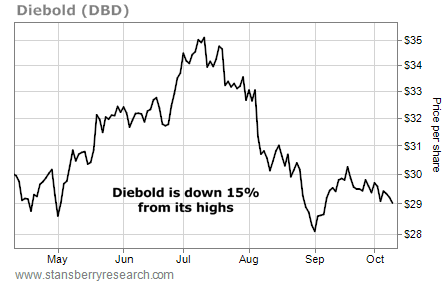 You see, even the 2008 financial crisis didn't stop Diebold from raising its dividend payouts a few cents each quarter. In 2007, Diebold paid $0.94 per share in dividends. In 2012, shareholders received a total of $1.15 per share. That's almost a 4% yield at today's price.
With interest rates so low, there's a huge demand for safe, steady dividend-paying stocks. And while most investors who want dividend income look to giant firms like Coke and McDonald's, many small-cap firms also have extraordinary records of consecutive dividend payments.
Diebold is one of the best. And its high yield is not the only reason to buy this company. Over the next few years, we will see a huge replacement cycle in ATMs.
These new ATMs are envelope-free. That means you can deposit checks simply by placing them into the ATM. You can also buy stamps, transfer payments between accounts, and have receipts sent directly to your e-mail.
These machines are already being rolled out. It's just a matter of time before banks all over the world are using these new Diebold ATMs.
Over the next few months, I expect the market will be weak. Stocks have enjoyed a great run in the past year. They're due for a profit-taking pullback. The debt-ceiling debate should put selling pressure on the market. Plus, the average stock in the S&P 500 index is trading at 15 times earnings. That's expensive considering earnings are only expected to grow around 3% in the coming quarter.
The coming weakness could push the broad-market indexes 5%-10% below their current levels.
When this correction comes, look to buy small-cap companies like Diebold. Although it might decline a few points from here, it's safe, steady dividend will draw buying interest... just like it has for decades.
Please share this article
at 12:03 AM No comments: Links to this post

What history says about volatility and the debt ceiling crisis

Democrats and Republicans have been fighting over budgets and related matters since before any of us were born and while the debate has been heated at times, only recently has the credit of U.S. debt been called into question as a result.

The last three instances of party budget squabbling have been much different than the Clinton-era budgetary battles. And one only has to watch the trajectory of the VIX during these battles to get a sense of the uncertainty, anxiety, and risk that was priced into SPX options during the period...