America is on the cusp of yet another opportunity to change the outcome and reverse a potential ‘One World Order’ and financial reorganization on an international scale. On September 13th Saturn will make an exact square to the Federal Reserve’s Neptune, a transit that is inharmonious and suggests bankruptcy and potentially a block to further QE3.

Saturn is the ‘old reaper’ that keeps a perfect set of books and won’t lend out a dime until all the accounts are in order, and Neptune is the planet of grand financial illusions that are so vague you cannot pin then down. There is another influence with this transit that can bring stubbornness and insubordination at the same time, so we could see more QE that is under the radar or very secret.

Saturn also brings order out of chaos and in my view September 13th marks the turning point, and a change of phase for America that will become more apparent over the course of the decade. Most likely there will be a return to the ‘old fashioned’ simple ways and values of our Grandparents. We could see a shift with the younger generations that is more conservative and demanding of a higher standard. Old fashioned movies and love stories may start to replace all the gore and violence in the cinema as people lose interest in the death culture.

The Saturn in Libra square only occurs once every 29+ years, so I find it very interesting that the Fed meetings in Jackson Hole line up so perfectly with very critical astrology transits. There are cycle analysts, and some fellow astrologers, that are all pointing to a top or “turning point” in the markets in September. Although I do see also a potential for a sharp correction in the near future, I will not call it a “turning point” or top in the markets here. In my view their analysis is correct that we have a turning point, but it may be more related to a turning point for America as a nation to uphold the standards of our Founding Fathers, and refuse to participate in the ‘Grand Bargain’ that Soros and others are espousing.

The potential beneficiary here could be gold and silver. There is an obscure star named Midas that has a reputation for (influence of) hoarding gold in it’s transit of Leo. Midas will be entering the sign Leo (gold) on September 14th just a few days before Pluto (mining) moves direct. We could see some pretty big moves for gold and silver in the very near future. Because of the hoarding influence of Midas we could potentially see a confiscation, block, or difficulty in obtaining physical metal also in the near future, so that means potential volatility and Comex delivery issues beginning September 26th.

I am far from the first writer to report that Canada’s housing-bubble is nearing some dramatic rupture. Indeed, I may be the last writer to have covered this topic – despite being based in Canada.

Why have I been the last scribe to jump on the media’s “bubble-mania” bandwagon concerning Canada’s housing market? Because there has been little to report here other than soaring debt-levels, which also exist throughout the Canadian economy; and, indeed, throughout all Western economies. The building bubble itself has not been even slightly newsworthy.

Lost in the mainstream media’s disjointed reporting on individual markets is a simple truth. As long as the West’s psychopathic banking cabal continues their policy of insane, destructive, near-zero interest rates; every housing market of every Western economy will be in a perpetual cycle of building bubbles or bursting bubbles. Period. Thus reporting that a “Canadian housing bubble” had formed had all the “news value” of announcing that the Sun had risen again in the morning. 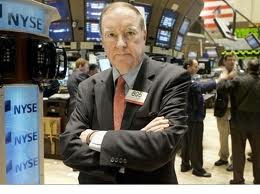 by Ambrose Evans-Pritchard, The Telegraph:

If Citigroup is right, Saudi Arabia will cease to be an oil exporter by 2030, far sooner than previously thought.

A 150-page report by Heidy Rehman on the Saudi petrochemical industry should be sober reading for those who think that shale oil and gas have solved our global energy crunch.

I don’t wish to knock shale. It is a Godsend and should be encouraged with utmost vigour and dispatch in Britain. But it is for now plugging holes in global supply rather than covering the future shortfall as the industrial revolutions of Asia mature.

The basic point – common to other Gulf oil producers – is that Saudi local consumption is rocketing. Residential use makes up 50pc of demand, and over two thirds of that is air-conditioning.

The Saudis also consume 250 litres per head per day of water – the world’s third highest (which blows the mind), growing at 9pc a year – and most of this is provided from energy-guzzling desalination plants.

All this is made far worse across the Gulf by fuel subsidies to placate restive populations.

Today Egon von Greyerz told King World News, “… we are now seeing a lot of fund managers and investors moving out of gold ETF’s, and taking delivery of physical gold and holding it outside of the banking system.” Greyerz, who is founder and managing partner at Matterhorn Asset Management out of Switzerland, also warned this is happening because they are now, “… deeply troubled at the thought of a systemic collapse.”

Greyerz also noted, “This move in gold and silver has barely started.” But first, here is what Greyerz had to say about the ECB announcement: “Eric, we had the announcement today that the ECB has agreed to unlimited bond buying. That means whatever amount is necessary, they will buy. This is designed to reach the objective of controlling interest rates so they don’t get out of hand in the peripheral countries of Europe.”

Please review the 1 yr chart of FDX (FedEx Corporation) below with my added notations: 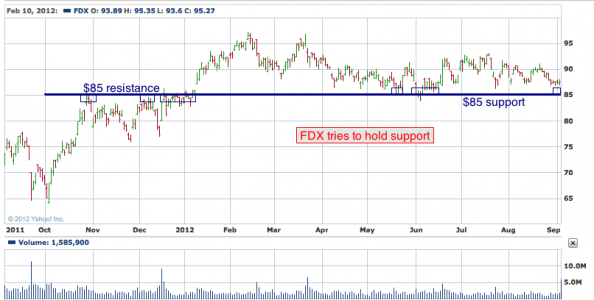 FDX has been trading sideways for the last 5-6 months. During that time the stock has been holding an important level of support at $85 (navy), which you can see was also a key resistance back in October and December. No matter what the market has or has not done over the last 5 or 6 months, FDX has not broken below $85. The stock appears to be making its way back down to that support level again.