How Traders Use It

In a strong price trend, the A-D Line will move in the same direction as the price. If the majority of stocks are advancing while prices are moving higher, as measured by a major index like the S&P 500, then breadth is confirming price. In a downtrend, prices should fall while the A-D Line declines. Divergences between price and breadth are usually signs of trend reversal.

For example, in early 2000, the market indexes pushed to new highs while breadth was falling. This is shown in the chart of the S&P 500 below.

Following breadth will lead to a number of false signals, a problem that is common with any other indicator.

As an example of a signal that didn't work, the recovery in the A-D Line that is seen in the chart of the S&P 500 late in 2000 did not lead to an upward trend in the indexes. The gain in the A-D Line that was seen then was most likely due to individual investors trying to find bargains.
This indicator often moves higher after a sharp price decline as traders buy hoping they have found a bottom. Because of that, the A/D Line is more useful for analyzing the action in an uptrend rather than a downtrend.

Why It Matters To Traders

Traders wanting to analyze breadth quickly will use this indicator. Breadth is a very important tool to confirm the price trend and the A-D Line is the simplest breadth indicator.
Divergences tend to be very important at significant market tops. Because many individual investors buy more stocks when markets are falling, the A-D Line is less useful in declines.


Please bookmark us
at 12:08 AM No comments: Links to this post

Chart Says This 250% Comeback Stock Has More Gains Ahead

In its heyday during late 2005, homebuilder Lennar Corp. (NYSE: LEN) peaked near $70. In August 2010, and as late as October 2011, the shares could be picked up for around $12, meaning they had shed well over 80% of their value. Since October 2011, however, riding the back of the U.S. housing and homebuilding recovery, the company has roared ahead about 250% to date.

Despite consolidating for more than three months between October and late December, the shares remain solidly above their rising 40-week moving average. The answer for the uptrend is simple: The company has been knocking the cover off the ball for earnings estimates.

Both the technicals and fundamentals say the stock should continue moving higher. From current levels, I expect roughly 20% gains, as I don't think the stock will stall until it tests round number resistance at $50.

Miami-based Lennar was started in 1954, and is now the third-largest homebuilder in the United States. It currently operates in 18 states. Its strongest geographical presence is on the East Coast between Florida and Massachusetts, but it also operates on the West Coast (California and Oregon) and has holdings in the Midwest and far west.

The company builds houses in several brackets such as affordable, move-up and retirees. It focuses on urban, golf course, adult active living and suburban developments. As of November 2011, it owned nearly 95,000 development lots with an option to buy almost 17,000 more, so it won't run out of land to build on anytime soon.

After bottoming at $11.73 in August 2010, the shares rallied to resistance just above $21 in February 2011. Turned back by strong resistance at this level, they headed south, and by October 2011, probed the $12 mark forming a potential double-bottom. Bouncing strongly off this level, they completed an almost two-year base in early 2012, rallying back above the key 40-week moving average, which began sloping upward.  (more)

Today 40-year veteran, Robert Fitzwilson, lays out the incredible roadmap for $25,000 gold. Fitzwilson, who is founder of The Portola Group, wrote the following piece exclusively for King World News which contains a powerful chart that he believes points to a staggering, “… long-term value of over $25,000 per ounce of gold.”
Below is Fitzwilson’s exclusive piece for KWN:
Continue Reading at KingWorldNews.com…

To analyze Fusion's stock for potential trading opportunities, please take a look at the 1-year chart of FIO (Fusion-io, Inc.) below with my added notations: 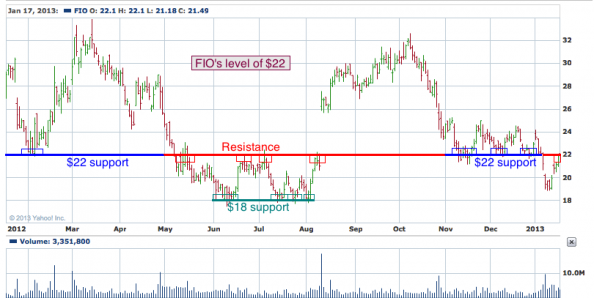 FIO really hasn't went much of anywhere over the last year. It's been up, then down, then up again, and now back down. Over that period of time though the stock has created a very common level at $22. That level was support back in January and then again in November to December (blue). The $22 level has also been resistance back in the summer and here again this week. A fall from $22 should mean an eventual test of the $18 lower level of support (teal).

The Tale of the Tape: FIO has a key level at $22. You could short FIO if it rallies back up to the $22 level with a stop placed above $12, or you could buy the stock if it breaks back above the $22 resistance. A fall down to $18 would also be an opportunity to go long on the stock.

wnd.com / By Jerome R. Corsi / January 20, 2012
EDITOR’S NOTE: Barack Obama’s involvement in the DeMar Second Amendment case was previously reported in Chapter 7 of Jerome R. Corsi’s “America for Sale: Fighting the New World Order, Surviving a Global Depression, and Preserving USA Sovereignty.”
NEW YORK – Could real estate on American soil owned by China be set up as “development zones” in which the communist nation could establish Chinese-owned businesses and bring in its citizens to the U.S. to work?
That’s part of an evolving proposal Beijing has been developing quietly since 2009 to convert more than $1 trillion of U.S debt it owns into equity.
Under the plan, China would own U.S. businesses, U.S. infrastructure and U.S. high-value land, all with a U.S. government guarantee against loss.
Yu Qiao, a professor of economics in the School of Public Policy and Management at Tsighua University in Beijing, proposed in 2009 a plan for the U.S. government to guarantee foreign investments in the United States.
WND has reliable information that the Bank of China, China’s central bank, has continued to advance the plan to convert China’s holdings of U.S. debt into equity owned by China in the U.S.
The Obama administration, under the plan, would grant a financial guarantee as an inducement for China to convert U.S. debt into Chinese direct equity investment. China would take ownership of successful U.S. corporations, potentially profitable infrastructure projects and high-value U.S. real estate.
READ MORE

How to Invest in Classic Cars

Mohammad Syed, head of strategic solutions at Coutts, says investments in classic cars have returned 18-20 percent annually on average since 1992.
Please bookmark us

This Exploding Grenade Will Create A Gold & Silver Surge

After a solid advance last week for gold and silver, today Michael Pento has written exclusively for King World News to let readers know about the exploding grenade which is going to send, “… increasing money flows into both gold and silver.”  Here is Pento’s piece:  “Japan has already suffered through 25 years of an economic malaise because they have refused to allow the free market to work its reconciliation magic.  Their reliance on government borrowing and spending to rescue the economy has proven to be a miserable failure.”

Michael Pento continues:
Because of this fact, Japanese politicians have succeeded to increase the debt to GDP ratio to 237%, which should have already caused a collapse in Japanese Government Bonds (JGBs) and the Yen.  However, JGBs have held their value for two reasons: The Japanese own 92% of their sovereign debt; And, up until now, deflation has reigned over the island….
READ MORE