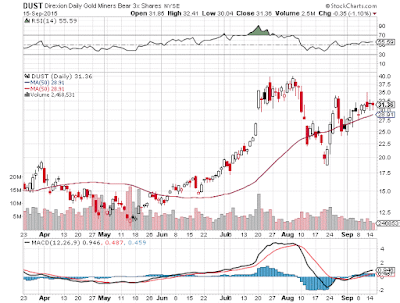 Punished by the stronger dollar and the specter of the Federal Reserve boosting interest rates, something that could happen as soon as this week, gold and the relevant exchange traded funds have struggled this year.
For example, the SPDR Gold Shares GLD, the world's largest ETF backed by holdings of physical gold, is down nearly 7 percent year-to-date. Things have been far worse for the ETFs holding shares of gold miners. The largest such fund, the Market Vectors Gold Miners ETF GDX , has plunged 28.6 percent this year, a loss that is more than quadruple that of GLD's.
For risk-tolerant traders, GDX's woes and those of rival gold miners ETFs are not bad news. Actually, those struggles are good news for traders with the fortitude to embrace the Direxion Daily Gold Miners 3X Bear Shares DUST, the triple-leveraged inverse answer to GDX. DUST attempts to deliver three times the daily inverse performance of the NYSEArca Gold Miners Index, GDX's underlying benchmark.

GDX's 2015 struggles have translated to a 27.1 percent year-to-date gain for DUST, though that is not an endorsement for holding DUST over the long term, which is not a good idea. DUST's nearly 20 percent fall from its August peak proves as much. Underscoring DUST's volatility and how rapidly the ETF can rise (and fall) is the fact that the ETF has endured that tumble and is still up 86 percent over the past 90 days.
Even with that massive 90-day run, DUST may have more upside in store for active traders. DUST “is developing a positive trend. RSI as a gauge of short-term momentum is trending higher. It’s currently at 60.15, well above the August high of 58.4. The MACD provides another confluence as this trend indicator is currently above the zero line with a consistent increase in spread vs the signal line,” according to a Direxion note.
Indeed, DUST is rebounding from its August tumble. The ETF entered Tuesday with a September gain of more than 24 percent, making it Direxion's second-best bearish triple-leveraged ETF on a month-to-date basis, according to issuer data.
Further validating the potential for more near-term upside in DUST is flows data, which continue indicating traders are departing DUST in favor of GDX and the Direxion Daily Gold Miners Bull 3X Shares NUGT , DUST's bullish counterpart. This is validation because as GDX and its rivals have slumped for going on three years now, inflows to bullish gold miners ETFs have served as indicators that investors and traders were hunting for bottoms that have yet to be found.
“Year to date DUST has seen a notable $117 million vacate the fund via redemptions likely on profit taking into the recent Miners slump, but then again NUGT has seen substantial inflows of more than $800 million year to date in spite of continued pressure on Mining names,” said Street One Financial Vice President Paul Weisbruch in a note out Tuesday.

SanDisk Corporation designs, develops, manufactures, and markets data storage solutions in the United States and internationally. The company offers removable cards, which are used in various applications and consumer devices, including digital cameras, camcorders, smartphones, tablets, and eReaders under the SanDisk Ultra, SanDisk Extreme, and SanDisk Extreme PRO brands; and embedded products that are used in mobile phones, tablets, notebooks, and other portable and wearable devices, as well as in automotive and connected home applications under the brand name iNAND. It also provides solid state drives (SSDs) for client computing applications, which include desktop computers, notebook computers, tablets, and other computing devices; and enterprise SSD solutions, as well as universal serial bus flash drives for use in the computing and consumer markets.
Take a look at the 1-year chart of SanDisk (NASDAQ: SNDK) below with my added notations: SNDK has been trending lower for the past 9 months. Over that time, the stock has formed an important trend line of resistance (red). Any (2) points can start a trend line, but it’s the 3rd test and beyond that confirm its importance. SNDK obviously has an important trendline of resistance, which currently sits right around $55. A break above that line should mean higher prices, overall, for the stock.

The Tale of the Tape: SNDK is currently stuck under a down trending resistance. A break above that resistance should mean higher prices for the stock, thus a long trade could be made. Short traders might look to enter a trade at the resistance.
at 12:03 AM No comments: Links to this post

The research note pointed out that Zynerba is currently developing synthetic cannabinoids (CBD and THC) for transdermal delivery. The analysts highlight two main elements that differentiate the company:
“It’s clear the two molecules have medicinal activity, and with transdermal technology, animal studies are quite predictive of success in humans,” the analysts assured. “Hence, we believe Phase1 (mid-2016E) should be a major de-risking event.”
Although this may sound “counterintuitive,” the firm emphasizes that Zynerba “is not nearly as ‘early stage’ as it might seem.” Even though the company currently has only two products, ZYN001 (prodrug of THC in a patch) and ZYN002 (CBD in a gel), the price target established only takes ZYN002 into consideration.

Davis and Liu pointed out four elements that are central to their investment thesis: