kingworldnews.com / September 21, 2012
Today 25 year veteran Caesar Bryan surprised King World News when he talked about gold advancing $700 to $1,200 in a matter of months.  Bryan stated, “Just looking at gold relative to the supply of money, gold may advance to $2,500 to $3,000 in the first few months of next year.”  Bryan, from Gabelli & Company, also discussed the nature of the current gold advance, silver, and what to expect going forward.

Here is what Caesar had to say:  “Since we’ve had the news of further easing in the US and Europe, gold has moved up in a sort of ‘step’ fashion.  It’s quiet for a few days, and then another move higher takes place.  Now we seem to be set for another ‘step’ move higher.”

“What that says is that there is very strong underlying demand for gold because the gold price hasn’t weakened in the face of these upward moves over the last month or so.  When you look at a chart you could claim that it’s somewhat overbought because we’ve had the move from the $1,600 area to the high $1,700s without much of a pause.

But the long-term opportunity is very much on the long side of the market.  Gold is going to go higher….
READ MORE
at 12:07 AM No comments: Links to this post

Seasonally Speaking, Next Three Weeks are Typically The Weakest of the Year

The Markets
Markets traded marginally higher on Wednesday, driven primarily by Consumer Discretionary stocks following a much better than expected report on Existing Home Sales. Homebuilders such as Pulte, Lennar, and Toll Brother pushed strongly higher, attacking multi-year highs that have been established over the past few trading sessions. Increasingly the housing industry is showing signs of recovering with Existing Sales hitting the highest level since early 2010 and back to levels witnessed prior to the 2008/2009 recession. Housing starts are also holding around the highest levels since the recession began. Seasonal tendencies for the home building industry, however, are less than favorable over the next month or so as the summer selling season concludes. Following the month-long “swoon”, the stocks see their best seasonal gains during the fourth quarter of the year as investors begin anticipating the spring building season. 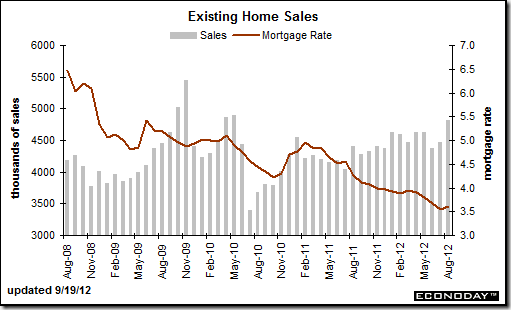 Over the past couple of days markets have seen momentum starting to show signs of decline. Price is stagnating. Seasonally, equity markets are within the weakest three week period of the year, which concludes just past the first week of October. Weakness has also been known to persist throughout October, resulting in an intermediate-term bottom that is often realized just prior to the end of the month. Given this seasonal framework and technicals for a number of asset classes starting to see momentum rolling over, probability is high that a selloff/correction will occur in the weeks ahead, potentially related to earnings caution. FedEx has been a recent prominent company touting weak economic fundamentals and earnings caution. Another transportation stock confirmed what FedEx was saying on Wednesday after the closing bell. Railroad operator Norfolk Southern warned that earnings would trail analyst estimates due to weakness in coal and merchandise shipments. An unrelated company, Adobe, also issued an earnings forecast on Wednesday that also missed analyst estimates. Oracle, a industry titan, will report earnings on Thursday after the market close, a report that is typically a leading indictor of the strength within the technology sector going into the seasonally favouable fourth quarter.  (more)

In the early 1870s, property prices in Vienna, Berlin and Paris soared on the back of a state-promoted building boom fuelled by easy credit extended against the collateral of unbuilt or unfinished houses.
The crash that followed parallels what has happened more recently and may, with other lessons from U.S. history, provide pointers for the euro zone crisis.

As the property prices soared, Europe's world was turned upside down. Thanks to grain elevators, conveyor belts and huge steamships, American farmers opening up the fertile Midwest were able to export vast quantities of wheat and then processed food.

Grain producers from Russia and central Europe simply could not compete with what came to be known as the American Commercial Invasion.

The crash came in central Europe in May 1873 as the low costs of the new industrial superpower exposed long-held growth assumptions as unrealistic. Continental banks collapsed, prompting British lenders to hold back their capital, unsure who was most exposed to souring mortgages. Interbank rates rocketed. (more)
at 12:06 AM No comments: Links to this post

Hot Shots: All Aboard or Train Wreck?

As we move towards the last trading week of September, a period historically renowned for its bumpy corrections and not to mention its sometimes grizzly neighbor of October, 2012 has so far been anything but troublesome for bulls with the SP-500 (SPY) up close to 4% for the month. With the latest action shaping up as a rather constructive and benign looking simple pullback into the 10SMA after setting four-plus year highs and the VIX ($VIX) refusing to shy away from its confident multi-year lows, is it time to say “All aboard” or be careful of an imminent train wreck?

As discussed about two weeks ago, if traders believe in the Dow Theory and its ‘train’ of technical thought which holds confirmation between the industrials (DIA) and transports (IYT) as sacrosanct; bears may be looking to climb on board the market. Despite the DIA setting fresh multi-year highs, the IYT has gone from attempting to break out of a neutral, but bearishly-positioned symmetrical triangle to a quick test of pattern support on Thursday. The grizzly pressure was due largely to a rail-road’ing of sorts from Norfolk Southern’s (NSC) south-of-analyst-views profit warning for its upcoming third quarter.

Figure 1: Dow Jones Transports (IYT) Daily
On the other hand, one chart which was a concern a couple weeks back, but now is potentially trying to bottom, is the world’s largest semi (SMH) outfit Intel (INTC).  Since we last wrote about Intel on September 10th in this column, shares have proceeded to move lower on the daily and confirm our prior worries on pending weakness. The good news is that same pressured price action when viewed on the big picture of the weekly chart suggests Intel’s downtrend could be near completion.  (more)
at 12:05 AM No comments: Links to this post

Do You Believe Bernanke or This Chart?

About 20 years ago, I learned to trust charts over what others were saying … even if they were central bankers.

Ben Bernanke told us that we’re not really experiencing inflation. However, if I look to the chart of the CRB Commodity Index, which essentially embodies inflation, I see that inflation bottomed in June/July and it has been heading upward ever since.

See larger image
But when did it get a turbo boost? It was when Bernanke provided stimulus to the market at the latest FOMC meeting. But that’s probably just a coincidence, right?

Yeah … I don’t think so either.

This basket of 19 commodities is heading higher, and it could be scary … unless you’re a commodity investor like we are in the Commodity Trend Alert newsletter.

You see, the CRB Commodity Index involves the stuff you buy all the time in one form or another. The index tracks everything from cocoa and coffee to unleaded gas and copper.

In life, you may or may not ever buy a stock. There is no requirement to do so. But be assured you will buy corn, wheat and all the other commodities in this index. That means when this index heads higher, it will hit you in the wallet one way or another.

Inflation is being stoked. I’m going to trust the chart over Bernanke, because charts don’t lie. And the best way I know of to hedge yourself against the rise in food and energy costs is to be invested in commodities.
at 12:05 AM No comments: Links to this post

Here Is the Key To The Global Markets Right Now

With uncertainty developing in global markets, investors and professionals are wondering where markets are headed from here. Today King World News interviewed 33 year veteran, John Gray, from Investors Intelligence to get the answer. When asked what he is seeing and where he believes markets are headed, Gray responded, “The latest polling of advisory sentiment, and that’s about 130 independently produced stock market newsletters, showed the bulls jumping this week up to 54.2%. The bearish reading declined to 24.5%.”

“The current reading of bulls at 54.2% is the highest reading we’ve had since the start of this year, and that would be mid-February when the Dow was approaching 13,000 for the first time. Readings of bulls over 55% starts to get scary to us, and occasionally, in strong market moves, major bull tops, you will have the bulls up as high as 60%.

That gets to be very dangerous (see chart below).
John Gray continues @ KingWorldNews.com

Crisis Replay… Soon Argentina Will Be on Sale Again

Just over a decade ago Argentina spectacularly unraveled with the biggest default in history — $100 billion. Dollar deposits were converted to pesos. Then, overnight, the peg of one-to-one with the dollar was broken. The unpegged currency immediately devalued. Savings were wiped out. Banks were set alight and locals took to the streets in protest.

That crisis created the biggest buying opportunity of a decade. During the ﬁre sales you could have picked up a historic, high-end property in Buenos Aires or a vineyard in Mendoza for a song.

Today, Argentina is back in a bind. There is a strong possibility of another crack-up within the next year. And then we’ll have the same opportunity we had a decade ago. The signs are all there. The streets of Buenos Aires have recently seen the return of the backstreet currency exchange.

According to the ofﬁcial exchange rate, which is subject to capital controls, 4.4 pesos buys you a dollar. But on the street people are happy to pay up to 6.7. Inﬂation runs at 25%. The purchasing power of an Argentine’s peso savings is going down by one-quarter each year.

The government claims inﬂation is 9.9% and has outlawed calculating or quoting any other inﬂation rate. Forty percent of dollar deposits have been withdrawn from Argentina since last October. Now there are capital controls. You need special permission to move your dollars overseas. (more)
at 12:03 AM No comments: Links to this post

kingworldnews.com / September 20, 2012
Today Ben Davies spoke with King World News about why he believes the gold market is headed much higher than current levels.  Davies made some bold predictions.  Here is what the rising star had to say:  “Right now, the best expression of our macro view is still to own gold and silver because we believe this is ultimately going to be the survivor of this Debt Supercycle.  We believe it’s going to be the surviving collateral.”
Ben Davies continues:
“The ECB, even in this last meeting, has effectively reduced its criteria again on collateral.  They are effectively saying, ‘We’ll take everything, including the kitchen sink into the ECB, if it allows us to backstop the system.  So in that situation collateral is running out.
We noticed this also in the US.  Smaller banks are now allowed to have gold as a zero risk-weighted provision….
READ MORE