New York State is known as the nation's financial capital, yet nearly one in 10 of its residents do not have a checking or savings account.

And while Texas is densely populated with banks, nearly a quarter of households in the Dallas-Forth Worth area have gone to a pawn shop or check cashing company recently to carry out a simple financial transaction.

Those were just a few of the findings of a new government survey released Wednesday on Americans' access to basic banking services.

The survey, which tallied responses from roughly 54,000 U.S. households, marks the first time that the Federal Deposit Insurance Corp. has published such data. (more) 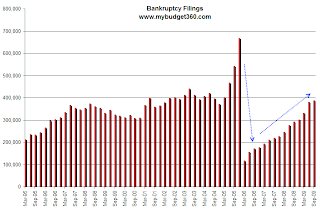 The U.S. Courts released data last week closing out the 2009 fiscal year. In the release we find that bankruptcy filings are up 100+ percent from 2007. No other economic vehicle shows deeper signs of financial strain than bankruptcy. Bankruptcy is the end of the road for many Americans. Although businesses file for bankruptcy as well the vast majority of filings come from individuals simply not able to meet the demands of their monthly payments. Average Americans are looking at the recovery talks but the reality on the street is much different. (more)
at 3:51 AM No comments: 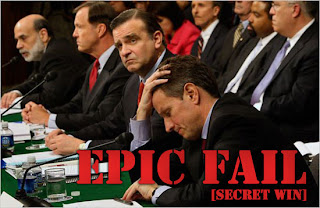 For the past couple years we have been covering every nuance of the economic collapse and in almost every instance we have come to the conclusion that 2010 would be the year that the U.S. would see an incredible downturn, possibly resulting in the inflationary disintegration of the Dollar, and a major stock market revolt which would destroy any remaining illusion Americans still have that a recovery is in progress:

We are now on the edge of winter 2009, and recent events across the globe indicate more and more that our predictions for 2010 were correct. Let’s examine some of those events and their implications now… (more)
at 3:38 AM No comments: 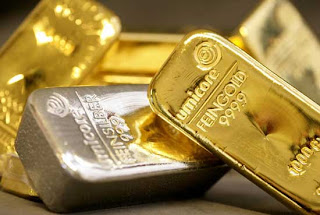 For decades, gold and silver investors have been warning the masses about the catastrophic weaknesses inherent in fiat currencies; currencies backed by nothing but empty promises and printed out of thin air ad nauseam by Central Banks. Precious metals, they said, were the only safe form of currency because they were finite, and could not be duplicated, meaning they could not be inflated to worthlessness. Until recently, these warnings have gone almost completely ignored by the general public.

Critics of gold (often proponents of Central Banks) contended that gold was an unrealistic and outdated foundation for an economy because its limited supply restricted liquidity, and kept a country from being able to “spend effectively.” (more)

The Case Against Paying Your Mortgage

At least that's the message from a University of Arizona law professor. Brent White's new paper argues just this tactic, and it is hitting a nerve as the nation's housing crisis enters its fourth year.

White is hardly first to talk about the idea of walking away from a mortgage that is bigger than the value of a home.

Nonetheless, his suggestions have gone viral and are popping up online, in newspapers and on television.

It's a move that can save some people money, but at the expense of wrecking their credit.

The topic is central to what's crippling the housing market: About one in four homeowners, or 10.7 million Americans, are considered underwater, meaning their mortgage exceeds their home value, according to real-estate information company First American CoreLogic. (more)

Invest in silver now! The dollar crash and the run for silver