Today King World News is reporting on incredibly important developments taking place in the gold and silver markets. Acclaimed commodity trader Dan Norcini told KWN that swap dealers, “… have radically reversed their position (in the silver market).” He also stated, “There is a (massive) battle being raged at that $35 level in silver, just like the $1,800 level in gold. Whichever side blinks first in this is going to experience pain, that’s for sure.”
Norcini has been stunningly accurate in his predictions of the movement of the gold and silver markets. Now the acclaimed trader discusses these incredibly important developments in gold and silver: “What we’ve got going on in these markets right now is a build in open interest, speculative inflows being met with commercial selling and swap dealer selling. It has effectively stalemated the action. What we have now (is a situation) where whichever side blinks first, that’s the side that is going to get hit.”
Dan Norcini continues @ KingWorldNews.com
at 12:07 AM No comments: Links to this post

One Sector Signaling Screaming 'Buys' in This Ambiguous Market

Traders looking at the stock market right now are finding it difficult to determine the direction of the major trend. We have seen several days where the market closed weak after showing a large gain at the open -- a sign of weakness. In addition, there are bearish momentum divergences building in stocks.

Charts of the major stock market averages can be interpreted as either bullish or bearish, but there is at least one market giving an unambiguous buy signal, and traders can focus on that while stocks work on developing a trend.

One indicator that I like to use is the little-known Momentum of Comparative Strength (MoCS). This indicator converts relative strength (RS) to a MACD-style indicator. Just like MACD, MoCS can be drawn as a histogram or as two lines with one line being the raw indicator and the second one being a moving average of the indicator. The two-line method offers more trading signals, but the histogram offers highly reliable signals. MoCS makes RS signals more precise and easier to spot. This indicator often allows traders to get in as a trend is just getting under way.

To picture RS, you can think of a golf ball being hit off the tee. At first, the ball is rising very quickly. If we measured its RS (the change in the speed of the ball), we would find that RS is accelerating as the ball rises. Soon, the ball levels off and so does the RS as the ball heads toward the hole. As the ball turns downward, RS will begin falling quickly. If we were trading a golf ball, we would want to buy shortly after the ball began moving off the tee and sell when the ball starts falling toward the ground. MoCS is an indicator that creates that kind of picture of RS on a chart.

Using just MoCS buy signals, you would buy when the momentum of the price change is accelerating and sell when the RS turns down. This simple indicator would have delivered 71% accuracy on the daily charts of SPDR Gold Shares (NYSE: GLD) and 100% winners on the weekly chart of that ETF. Right now, we have already seen the daily signal and are setting up a weekly buy signal.

The Rise of Asia: Martin Armstrong 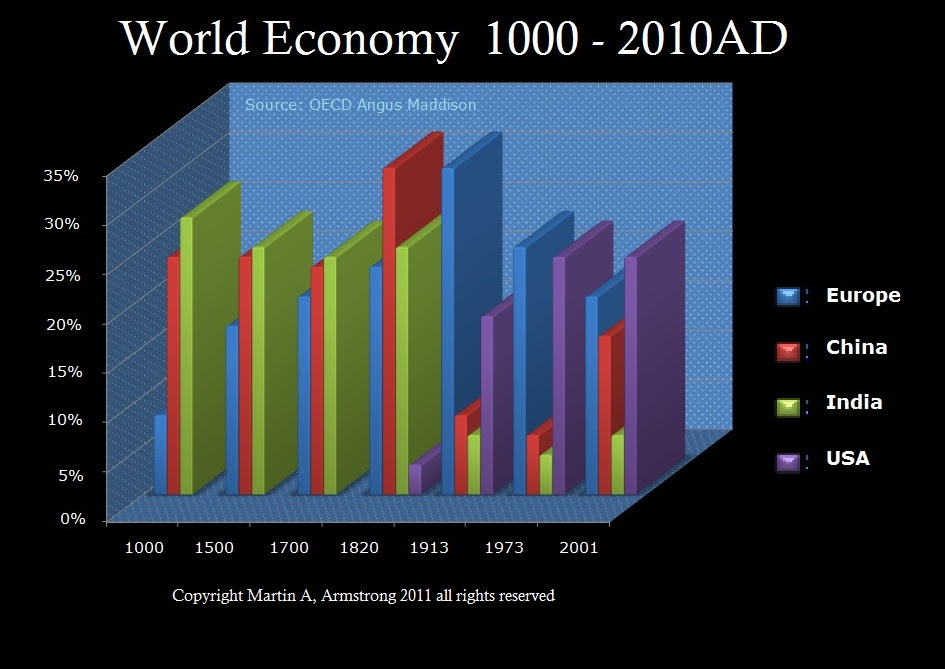 armstrongeconomics.com / by Martin Armstrong / October 5, 2012
Within less than one year, the United States in its Draconian move threatening to confiscate the assets of any foreign entity that FAILS to report what Americans are doing overseas has so devastated international business it is an understatement to overlook this legislation for it is having the same effect as  the Protectionism of the Great Depression. The bureaucrats have PRESUMED that anything an American does overseas must be illegal and to hide money. This one piece of legislation is devastating in that it has stopped dead the ability of American small business to every expand internationally. Americans can no longer compete in the world economy thanks to the actions of their own country.
READ MORE
at 12:05 AM No comments: Links to this post

Exxon Mobil (NYSE:XOM) – This is the world’s largest publicly owned oil company. Formed in 1999 through the merger of Exxon and Mobil, the combined company has been paying dividends for 130 years, and it currently yields 2.49%. Earnings are expected to improve to $8.18 in 2013, up from $7.58 in 2012.
A close above the current resistance line at $92.50 should propel this long-term dividend payer to $98. Support is at the intermediate uptrend line and 50-day moving average at $89. Both traders looking for a quick pop and long-term buyers looking for a secure dividend should buy XOM at the current price.

My Dear Friends,
Did you notice that $1775 was Friday’s low in gold? $1775 has taken on more meaning as it has been arbitrarily elected maybe because of its implications in the silver/gold ratio.
Personally, I think ratios have 20/20 vision backward and are blind looking forwards. They do however make good conversation when there is nothing else to talk about.
The range for gold now is clearly $1750 to $1800.
We witnessed the most transparent false report on employment in statistical history Friday. What party does not want to see gold above $1800 before the election? I would say the party of the Banksters, therefore their tool is the gold banks.
Read More @ JS Mineset
at 12:03 AM No comments: Links to this post 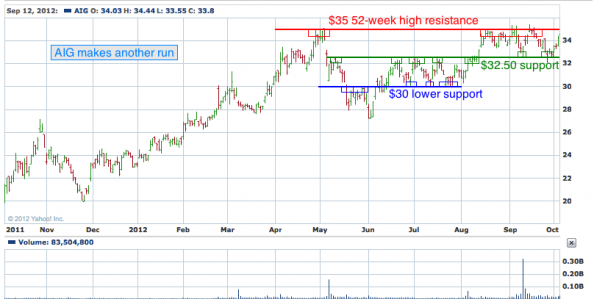 After trending higher from November through April of this year, AIG corrected in May and has settled within a small rectangle pattern over the last (2) months. A rectangle pattern forms when a stock gets stuck bouncing between a horizontal support and resistance. For AIG, the rectangle pattern has formed a $35 resistance (red) and a $32.50 support (green), which was also the resistance for AIG's previous rectangle formation of June/July. Not only would a break above $35 be a resistance break, but it would also be a 52-week high breakout.
at 12:03 AM No comments: Links to this post