Watch The Untouchables on PBS. See more from FRONTLINE.


FRONTLINE investigates why Wall Street’s leaders have escaped prosecution for any fraud related to the sale of bad mortgages. Well before the 2008 financial meltdown, mortgage industry insiders discovered a ticking time-bomb that they say went up to the very top of Wall Street. What did they find? Who did they warn? And what happened to their warnings? Below is Part 1. Here is a direct link to all 4 parts.

We've managed to avoid the great Mayan prediction of the end of the world in 2012, along with countless doomsday prognostications before it. But while we shrug off the continued calls that some people still predict about the end of the world, it's undeniable there are good reasons investors should have a "doomsday portfolio" to protect them from catastrophic losses.

I'm not talking about the end of times, though. In the event of runaway asteroids or "the second coming," saving for your golden years will be the least of your worries.
But I'm also not talking about simply a global malaise in economic growth or the gradual loss of purchasing power in the U.S. dollar, either.
I'm talking about a quick collapse of order -- a collapse of faith in our institutions and a resulting widespread loss in financial assets.
And if you think this could never happen, then think again.
Hurricane Katrina destroyed more than $60 billion in economic value and led to massive looting and a surge in energy prices. The "once-in-a-century" disaster was followed just seven years later by Hurricane Sandy, which caused damage that may cost up to $50 billion.

Officials in Japan have found radioactive material in produce up to 200 miles from the Fukushima nuclear disaster.  (more)

Legendary gold trader Jim Sinclair sent subscribers a shocking and MUST READ email alert last night regarding the possibility that the dollar as reserve currency will enter the initial stages of hyperinflation by mid-year, and the effects the debasement of the dollar will have on gold.
Sinclair states that by midyear of 2013 the US Federal Reserve will have to make a decision in order to keep the US bond market which is US interest rates at the low levels that have been promised until employment has made a sustained recovery and that The Fed’s defense of the US bond market is demanded by the huge pile of original and old OTC derivatives that still haunt the monetary system as specific performance contracts with any financing floating in cyber space. This could drop the US dollar below .7200 to .5600 on the USDX in a short period of time.
Read More @ Silver Doctors

A Review Of Apple's Topping Pattern - A Must Read

This blog today is discussing the value of reviewing past patterns. That is also what the Webinar yesterday was about. Past patterns. Here is the webinar link.
This blog today is not to beat up on the holders of a given stock. This blog is discussing how to learn about 'when to sell your big winners'. Apple just happens to be a great example and timely as its fresh.
It was a long time back on October 08, 2012 when we talked about The Apple Starts to Soften. I got some of the meanest responses to a blog when I wrote that one.  I was reminded by a friend yesterday about the blog.
It is just too eerie when you see the content of the January 1984 Superbowl Ad that ran on January 22, 1984. 30 years later, the ad is spooky. See the ad here.
Apple advertised itself as time to think differently. In the stocks final run up, everyone behaved like the inmates in the movie. They followed the lead of the others.  Everyone is following everyone else down the Apple Mountain now, following the lead of others. Exactly 30 years later, on the next day, the investors behaved exactly like the ad again. Isn't that one of the strongest cases of irony ever?
I don't propose that the charts get everything right. I paper traded an option in Apple at $600 after it fell and expected a bounce. It did not happen!
In the top in Apple, the charts did a good job of mimicking previous exhaustion runs as demonstrated in the blog The Apple Starts to Soften. One Elliott Wave Chartist out of Seattle had plotted Apple to rise to $705 well in advance. Joe Terranova sold Apple on the day. Nice work to both of those technicians!
Here are two of the charts from that blog. There were many more and a good blog to read again.

Here was the daily. (more)

The "Chart of the Day" is Toll Brothers (TOL), which showed up on Wednesday's "52-Week High" list. Toll Brothers on Wednesday posted a new 7-year high and closed +2.07%. TrendSpotter has been long since Jan 3 at $33.39. In recent news on the stock, Bank of America/Merrill on Jan 10 reinstated research coverage on Toll Brothers with a Buy and a target of $42. Toll Brothers CEO told Bloomberg in an interview on Jan 23 that Toll Brothers is planning to expand into "high-end" college dorms. Toll Brothers, with a market cap of $6 billion, designs, builds, markets and arranges financing for single-family detached and attached homes in middle and high income residential communities in thirteen states and five regions around the country.

Consumers are financially vulnerable and they know it

This morning the latest consumer sentiment data shows US consumers– still the relatively wealthiest consumers in the world –continue to feel pessimistic about their economic future. Sure, there have been a couple of hopeful spurts in early 2009 and 2011, but overall the chart below attests that US consumers have labored in various degrees of depressed sentiment since the heady euphoria of the late great secular bull in 2000. 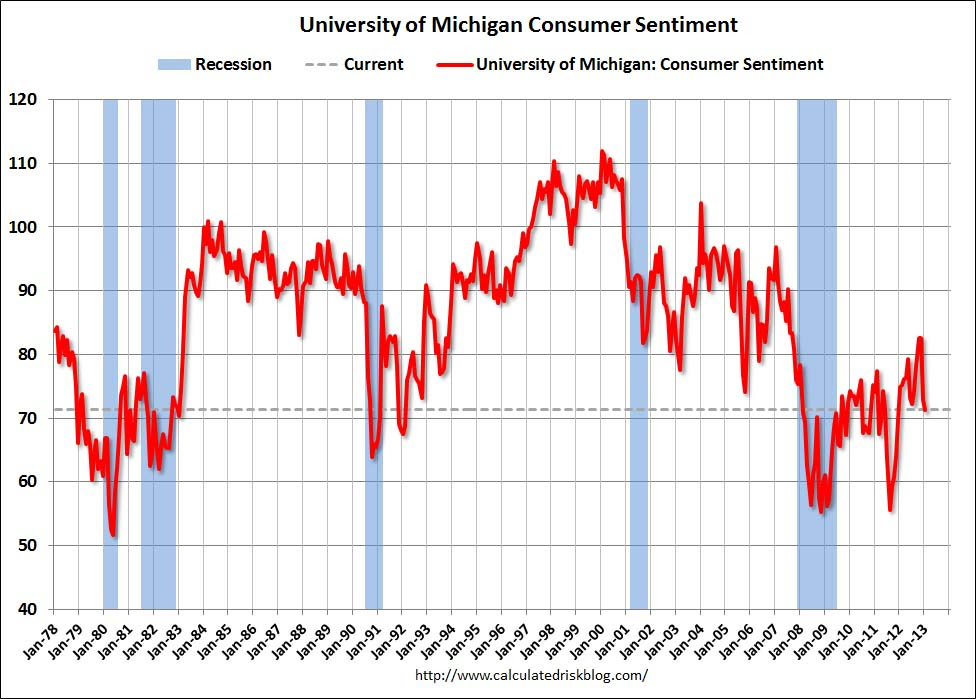 No doubt, there are some bankers and other elites who wax mystified at such trends. “Why in the world are the masses so gloomy?” they are wondering. I have a suggestion: despite the appearance of some material trappings, the masses are financially broke (physically too, but that’s another story). And for the first decade since the last two credit/housing busts in 1980 and 1990–they have come to know and feel their vulnerability. They feel it in their lack of savings, lack of  cash flow, low to no home equity and lack of quick fixes.  As shown in this next chart, 60% of workers aged 55 and older have less than $100,000 in liquid savings.  Those under age 55 have much, much less. 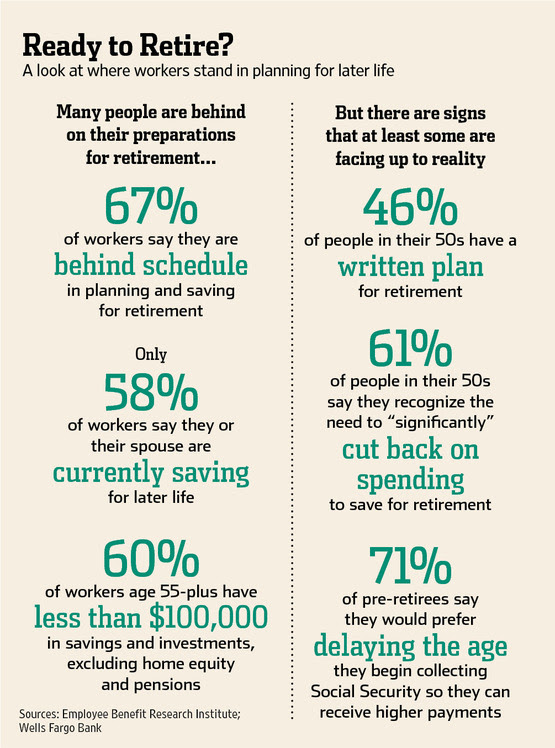 Not only are people under-saved today, but the savings that they do have has earned typically negative returns now over the past 15 years, as stocks continue through a secular bear and interest rates have plunged toward the zero bound. Add under-employment and record debt levels to meager savings and we should fully comprehend why people are feeling low.  All the while, marketing media taunts at every moment, about all the things we should want to consume.

There are important, life-changing lessons to be learned in all of this.  Lessons about the danger of debt, and the folly of high spending rates.  Lessons about the perils of ignoring this truth and placing ignorant faith in the investment sales crowd who repeatedly promise that they can magically make up for the client’s lack of savings and spending controls by plopping any savings they do have into risk “plays” at every price.

We see this today as we have seen it repeatedly since the late 90′s, as desperate people buy over-priced risk for tenuous short term “yield” in securities that are likely to come at a devastating cost to their unsuspecting capital once more.

The bottom line is this:  when we do not want to accept facts before us and make prudent changes to our financial behavior as needed, then we are destined to suffer repeated harm, unless and until we do.  This truth is timeless.