The dream of each investor to score 10-baggers, i.e. stocks that go up tenfold. There is certainly a myth surrounding 10-baggers, but, unfortunately, also a fraudulent perception as the topic is abused by many fraudulent websites offering pseudo-advice on it.
In this article, we look at 3 small-cap stocks with 10-bagger potential in 2017 and later. Our selection is, as always, based on decent research, long term analysis, and company fundamentals. We give also one bonus stock tip, which is likely to become a multi-bagger (maybe not a 10-bagger).
In general, 10-baggers are found in very volatile sectors, primarily technology and commodities (miners). We believe technology companies will outperform other market segments in 2017, because the dominant trend currently favors risk-taking and is neutral at best for commodities. This is also in line with Forbes’ thoughts on the matter as their recent article featured only small-cap stocks with 10-bagger potential.

We have featured Energous Corp many times, as we consider it a fantastic story. Their technology enables users of electronic devices to charge wirelessly. Recent speculation on a potential cooperation with Apple took the share price many multiples higher.
Why do we believe this small-cap stock has 10-bagger potential in 2017? Because, according to their plan, they would be break-even in the second half of 2017. It remains to be seen whether that will happen or not, but, in case the company holds its promise, this stock will go much higher next year.

The last 18 months have been extremely exciting for Edgewater Wireless. The company is trading in Toronto on the Junior Exchange. It has a market cap of $49M, so it basically ranks as a nano-cap. Its technology solves the problem of high density wi-fi access. On a lot of public places, the wi-fi speed is not good at all. Edgewater Wireless solves that problem adding bandwidth and capacity to wi-fi access points.
The company does not have sufficient revenue at this point. It was rewarded with sponsoring by the UpRamp Fiterator Program. In that program, only 4 tech providers are opened the door to the world of cable and telco providers, as a way to accelerate the usage of innovative technologies. That program is likely to accelerate the rollout of Edgewater’s technology and sales channel(s), a trend which we expect to start in 2017.
Buy this company on significant dips.

The biotech company Biotime offer solutions for an incredibly fast growing market: facial aesthetics. This market is set to triple in the coming 3 years. Next to that, Biotime uses stem cells to generate regenerative medicine solutions.
The company sits on strong growth trends, which makes it eligible to become a 10-bagger in the years to come. With a market cap of only $350M, no debts, and a good cash position, there is tremendous room for growth. We believe it is a matter of time until this company goes many multiples higher. The biggest risk we see is that their products cannot meet the minimum requirements within the context of the regulatory framework.

As a bonus, we add Mitek to the above list. However, we believe its growth will be a bit more steady than the other stocks in this article, so we would categorize it as a multi-bagger rather than a 10-bagger.
Mitek is active in the incredibly prosperous domain of mobile commerce and mobile identity. It is already the market leader in its segment. We believe the company has multi-bagger potential because the mobile trends are only know accelerating. Mitek has its technology adopted by top Fortune 500 companies. We believe this to have first mover advantages on which they can leverage as the mobile market continues to grow.
Moreover, Mitek’s technology is scalable. As more customers adopt their technology, revenue and profits will increase disproportionately. 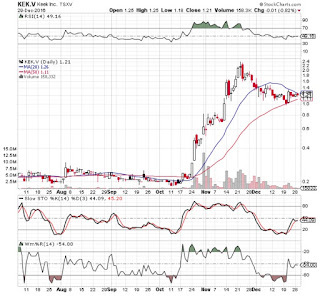 The eyes of speculative investors were not set on technology stocks in 2016, because marijuana stocks stole their gaze. Still, a list of the top performing junior techs stacks up quite well. The reason? A once paltry selection of stocks has rounded out quite nicely in the past few years.
The IPO drought that has stricken the big board hasn’t stopped a bunch of new companies from staking their claim on the junior exchange.
The October appointment of Brady Fletcher, a banker with a B.Sc. in Computer Engineering who is well known in innovation circles, to head the TSX Venture Exchange, suggests this trend may continue.
So here is our annual countdown of the top ten TSXV Tech stocks. The list comes with a few caveats: we don’t include stocks that began the year under ten cents, ones that had a change of business during the year (i.e. RTO), or those that do not have a full year of trading under their belt. All technology stocks trading on the TSX Venture Exchange are eligible.  (more)
at 12:02 AM No comments: Links to this post