World Bank: –ALL GOLD IN FORT KNOX IS LEASED– ( & Is No Longer Included In Reserves…..) 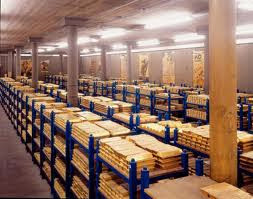 IT IS ALL LEASED!!!
THEY CAN’T HIDE IT FOR MUCH LONGER.

Another ‘rational’ seller at work, trying to get the most $$$ for their paper gold:

Today’s $30 up move has had not one single outsized volume “minute” of trading other than 1 minute overnight that saw selling, not buying. Just steady buying.

LEASING IS A SCAM!

When gold is ‘leased’, someone else (Usually a bullion bank) takes delivery and SELLS the gold.

(ASIDE: why do this? — because they get the $$ in from the sale and buy an asset returning e.g. 3% if they buy a Treasury Bond with the $$$. They hope to buy the gold back at the end of the lease, and will often paper-hedge the price risk.)

A person buys that gold from the bullion bank and puts it in the safe. They own it.

BUT the Central Bank also says it owns it!! Thus the gold is counted twice.

If you don’t believe me, check here at the IMF:
http://www.imf.org/external/np/sta/ir/IRProcessWeb/data/ECB/eng/CURecb.HTM
Please share this article
at 12:06 AM No comments:

Meanwhile the most recent OECD report ranks Canada as having the second most over-valued housing market on the planet (note the trend among commodity producers here, too bad that commodity super-cycle is moving the other way now), just as Canadian household debt hit a fresh record in the second quarter at 163.4% debt to disposable income. (more Canadian bank shares anyone??) 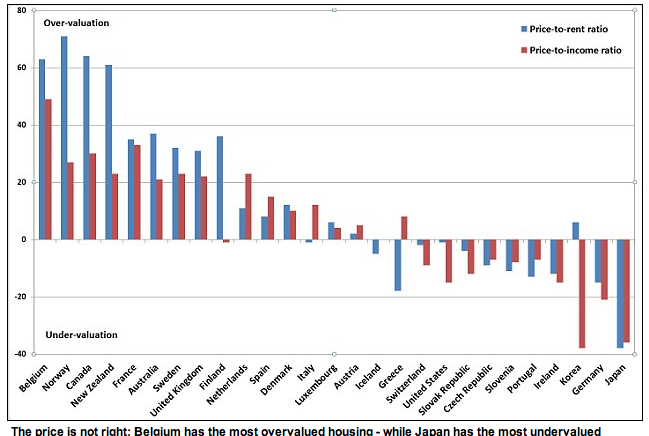 Should We Be Selling Cocoa?

This is an interesting one: Cocoa
There’s a lot going on in this market that screams sell it. But let’s begin with price. This sucker is up 30% since March and now running into a declining 200 week moving average. I haven’t been long, but if I was I would certainly be taking profits up here. But is there enough to flip it short?
This is a daily candlestick chart of $CC_F showing a bearish divergence in momentum and currently breaking below its 20 day moving average. That’s another problem that I have with it. But fortunately for the cocoa bulls, it’s still above the uptrend line from June, for now… 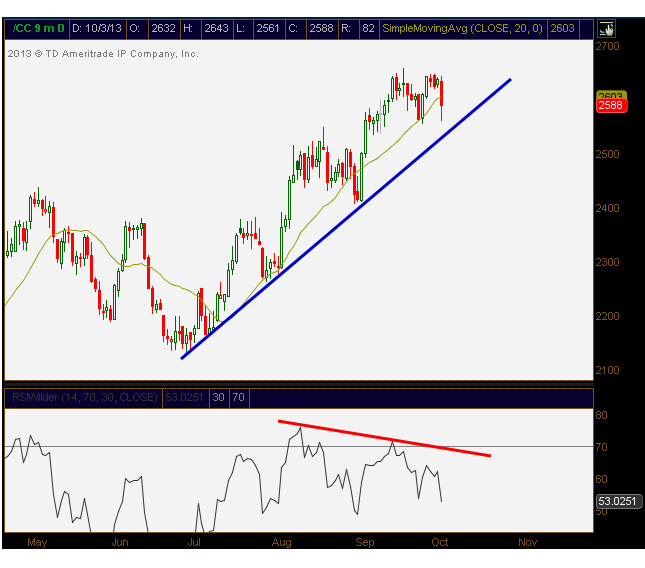 Seasonally, this could not be a worse time for Cocoa. Look how the month of October stands out: 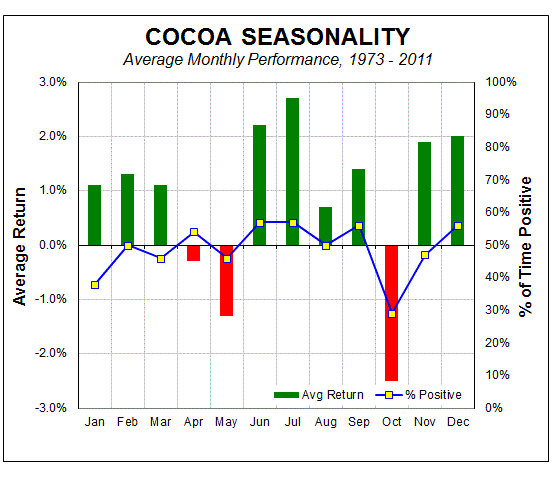 And sentiment wise, the wrong people love it and the wrong people hate it. It seems to me that the smart money (commercials) are dumping this commodity while the “dumb money” speculating are trying to chase this thing. 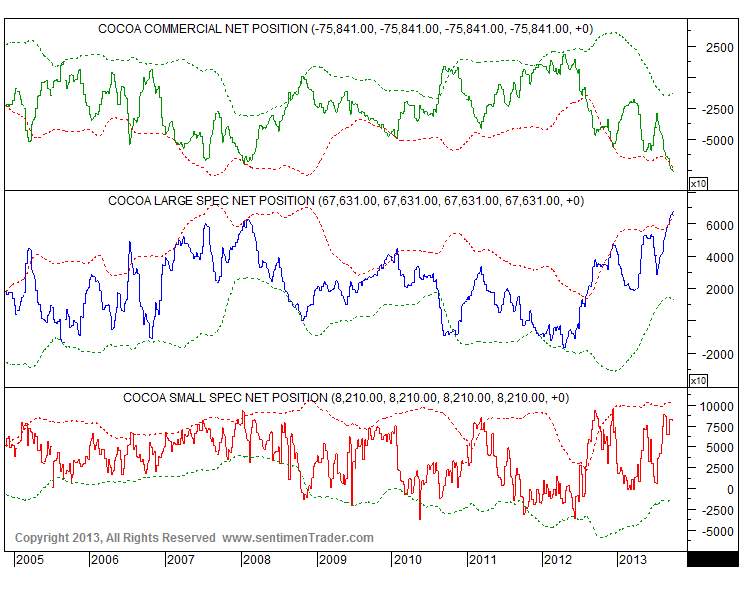 David Stockman – This Financial Collapse Will Be Catastrophic

Today David Stockman stunned King World News when he warned the coming financial collapse is “going to be catastrophic.” Stockman also said that we will see “massive selling” of overpriced financial assets, but he also made the frightening prediction that “there won’t be any bids.” KWN takes Stockman’s warning very seriously because he is the man former President Reagan called on in 1981, during that crisis, to become Director of the Office of Management and Budget. He also spoke about what this means for gold and other major markets. Below is what Stockman had to say in the first of a series of powerful interviews that will be released today.
Continue Reading at KingWorldNews.com…
Please share this article
at 12:04 AM No comments:

S&P Threatens To Cut US Debt To Junk

“This sort of political brinkmanship is the dominant reason the rating is no longer ‘AAA’” – S&P ratings agency in a research note.

S&P, a unit of McGraw Hill Financial, is already famous for having had the balls to strip the US of its AAA sovereign credit rating in 2011 when the debt-ceiling fight in Washington – an inexplicable charade for observers overseas – turned from silly grandstanding to utter brinkmanship, fired on by convoluted political brainstorms and upcoming primary elections.

In retaliation, or so S&P claimed, and to teach all ratings agencies a lesson they’d hopefully never forget, the Department of Justice has put S&P through the wringer and in February sued it – deservedly – over its role in the financial crisis, i.e. for allegedly misleading financial institutions about the validity of its ratings.
AAA-rated mortgage-backed securities as the underlying mortgages were already defaulting? No problem. The DOJ accused S&P of, among other things, having inflated ratings to pocket fatter fees from issuers.

The other ratings agencies, which all played a similarly egregious role in the financial crisis but kept their mouth shut and did not downgrade the US in 2011, have not been hounded by the government. So S&P claimed that the “impermissibly selective, punitive and meritless” lawsuit was “in retaliation for defendants’ exercise of their free speech rights with respect to the creditworthiness of the United States of America.”
(more)
Please share this article
at 12:04 AM No comments:

Why are young people in America so frustrated these days?  You are about to find out.  Most young adults started out having faith in the system.  They worked hard, they got good grades, they stayed out of trouble and many of them went on to college.  But when their educations where over, they discovered that the good jobs that they had been promised were not waiting for them at the end of the rainbow.  Even in the midst of this so-called "economic recovery", the full-time employment rate for Americans under the age of 30 continues to fall.  And incomes for that age group continue to fall as well.  At the same time, young adults are dealing with record levels of student loan debt.  As a result, more young Americans than ever are putting off getting married and having families, and more of them than ever are moving back in with their parents.
It can be absolutely soul crushing when you discover that the "bright future" that the system had been promising you for so many years turns out to be a lie.  A lot of young people ultimately give up on the system and many of them end up just kind of drifting aimlessly through life.  The following is an example from a recent Wall Street Journal article...


James Roy, 26, has spent the past six years paying off $14,000 in student loans for two years of college by skating from job to job. Now working as a supervisor for a coffee shop in the Chicago suburb of St. Charles, Ill., Mr. Roy describes his outlook as "kind of grim."
"It seems to me that if you went to college and took on student debt, there used to be greater assurance that you could pay it off with a good job," said the Colorado native, who majored in English before dropping out. "But now, for people living in this economy and in our age group, it's a rough deal."  (more)

As my doubts about the performance of key stock indices continue to mount, some in the mainstream are saying the market will only go higher.
More...
Please share this article
at 12:03 AM No comments: