Eric King: “Tom, we are continuing to see these advances in gold and silver that you predicted would happen. Let’s start with gold.”
Fitzpatrick: “Yes. Overall we are still of the view that what we saw was a very deep correction in secular bear market, but a correction nonetheless. The platform which has now been established with the recent low, below $1,200, is going to be a platform for a substantial move higher….
“The price of gold is now advancing above the area that really marked the breakdown point in gold. This area is where gold has the rising trendline and the 55-month moving average. These zones come in around the $1,390 to $1,405 levels.
Tom Fitzpatrick continues @ KingWorldNews.com

Tesoro Corporation engages in refining and marketing petroleum products in the United States. It operates in two segments, Refining and Retail. The Refining segment refines crude oil and other feed stocks into transportation fuels, such as gasoline, gasoline blend stocks, jet fuel, and diesel fuel, as well as other products, including heavy fuel oils, liquefied petroleum gas, petroleum coke, and asphalt. This segment also sells refined products in the wholesale market primarily through independent unbranded distributors; and in the bulk market primarily to independent unbranded distributors, other refining and marketing companies, utilities, railroads, airlines and marine, and industrial end-users in the western United States. It owns and operates 7 refineries with a combined crude oil capacity of approximately 675 thousand barrels per day. The Retail segment sells gasoline, diesel fuel, and convenience store items through company-operated retail stations, and third-party branded dealers and distributors in the western United States.

To review a current H&S pattern on Tesoro’s stock, please take a look at the 1-year chart of TSO (Tesoro Corporation) below with my added notations: 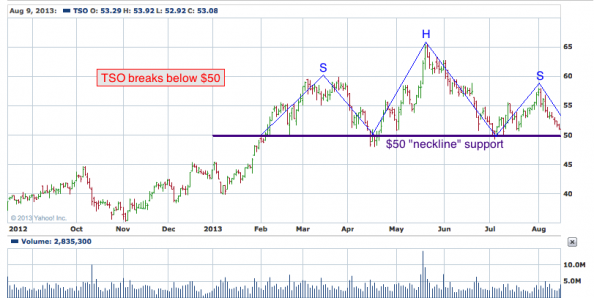 TSO had rallied from a low of $35 in November to a peak of $65 in May. Over the last (6) months the stock had created a very important level of support at $50 (purple), which was also the “neckline” support for the H&S pattern. Above the neckline you will notice the H&S pattern itself (blue). Confirmation of the H&S occurred yesterday when TSO broke its $50 “neckline” support. So, the stock should be moving lower overall from here.

Keep in mind that simple is usually better. Had I never pointed out this H&S pattern, one would still think this stock is moving lower simply if it broke below the $50 support level. In short, whether you noticed the pattern or not, the trade would still be the same: On the break below the key $50 level.

The Tale of the Tape: After embarking on a nice rally higher, TSO confirmed a head & shoulders pattern. A short trade could be placed now, or could be entered on any rallies up to or near the $50 area.
Please share this article
at 12:05 AM No comments:

Read | Subscribe@iTunes
Please share this article
at 12:05 AM No comments: 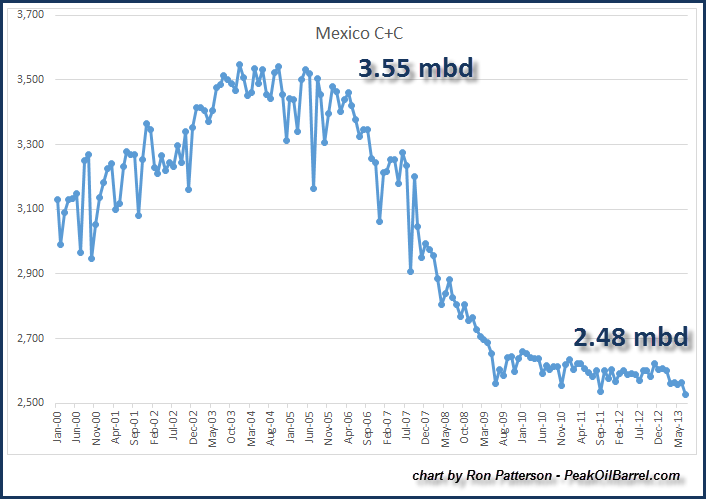 The largest silver producing country in the world saw its oil production decline to the lowest level since 1995. Mexico who produced 162 million ounces of silver in 2012 is slated to increase this substantially by the end of the decade… that is, if they have the available energy to do so.
If we look at the chart below, we can see just how much Mexico’s oil production has declined since 2000:
[...] The last plot line on the chart was for June 2013 which was approximately 2.51 mbd (million barrels a day). However, according to PEMEX, Mexico’s state-run oil company, in the month of July its production of crude & condensate declined to 2.48 mbd.
Continue Reading at SRSRoccoReport.com…
Please share this article
at 12:05 AM No comments:

The Chart of the Day is Primo Water (PRMW).  The stock has 96% Barchart technical buy signals and  Trend Spotter buy signal.  I found the stock by sorting the New High List and then using the flipchart feature to pan through the charts to find the one I like. 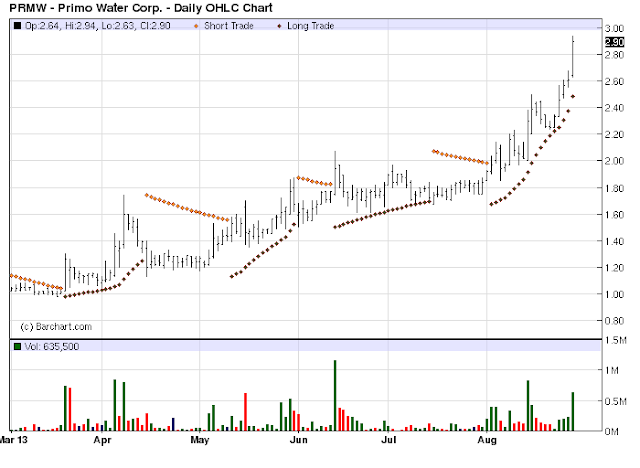 Hopes of a speedy solution to the unrest in mining industry in South Africa have receded as the National Union Mineworkers (NUM) which represents about 64% of the mine workers have rejected the mining industry offer to raise wages by six percent.
NUM rejecting the final pay offer made by the Chamber of Mines said the six percent hike was a big joke and they reject the offer with contempt.
The gold mining companies involved in the negotiations were AngloGold Ashanti (NYSE: AU) , Gold Fields (NYSE:GF), Rand Uranium, Harmony Gold (NYSE: HMY), Evander Gold, Sibanye Gold, and Village Main Reef.
Read More @ BullionStreet.com
Please share this article
at 12:03 AM No comments: