AltInvestors has released an EXPLOSIVE interview with GATA’s Bill Murphy. Murphy has previously stated several of his best sources have advised him gold and silver will make massive bull moves in August, and will soon set new all-time highs.

Murphy went a step further today stating that ‘JP Morgan and their silver short positions is going to be a scandal rivaling the LIBOR manipulation scandal- it’s so focused, LIBOR involves so many companies, this is JP MORGAN!
They’re in BIG TROUBLE, and when silver takes out $30 it’s probably going to go to $40 or $50 and it could do it fairly quickly‘.

Murphy went on to say ‘the Gold Cartel and JP Morgan are starting to lose control of their manipulation of these low prices. Morgan’s position is going to be exposed, they don’t have the metal to keep the prices down here!‘

Muphy continued: ‘This thing is gonna blow up. Whether it’s a Madoff or an Enron, you never know when the thing’s gonna blow. I stated previously that in August the launch would start. The launch has started.
There is going to be a JP Morgan silver scandal to rival LIBOR. They’ve been caught. There are whistle-blowers that are going to do a Madoff on them. This thing is going to explode, it’s going to be sensational, and MEGA!‘

Will September 12th Mark the COLLAPSE of the EuroZone? PLUS, There IS a Developing Shortage of Physical Silver & Gold – Alasdair Macleod

Alasdair Macleod, Head of Research for GoldMoney.com joins me to discuss the critical German Constitutional Court decision due on September 12th which may mark the END of Germany’s ability to fund the endless Euro Zone bailouts, which now total more than $2 TRILLION for Germany alone! If Germany bails on the bailouts… the EuroZone will fall and all hell will break loose globally. In Part TWO we talk about the developing shortage of physical gold and silver, and the total DENIAL of the average American that there is any problem whatsoever.

This Is Going To Shock The World

Today John Mauldin stunned King World News when he went into detail about events that will, “… be a shock to the world.” Mauldin, President of Millennium Wave Securities, also warned, “Nobody sees that coming.” Here is what Mauldin had to say: “The problem is the deficit. We hit the wall, I don’t think most people really understand how catastrophic it would be to hit that wall. It’s just something that we haven’t seen in the US. It’s not in anybody’s lifetime experience, and it would be ugly.

If you want to know what it looks like, go to Spain, go to Greece, go to Argentina. Go to any one of a couple hundred countries that have hit that wall. There is a wall. There is a limit. It’s more difficult this time. We’ve got a deeper, bigger problems.

If you were looking at a stock chart, of the ability of this Congress to work together, it would not be a stock you would buy….”

Allied Nevada Gold Corp., together with its subsidiaries, engages in the evaluation, acquisition, exploration, and advancement of gold exploration and development projects. It principally operates the Hycroft Mine, an open pit heap leach gold and silver mine covering approximately 61,389 acres of mineral rights located in the west of Winnemucca, Nevada. The company is also involved in the exploration and development of various exploration properties, including Hasbrouck, Mountain View, Three Hills, Wildcat, Maverick Springs, and Pony Creek/Elliot Dome projects. In addition, the company holds exploration rights to approximately 100 other exploration properties in Nevada. Allied Nevada Gold Corp. was incorporated in 2006 and is headquartered in Reno, Nevada.

Please take a look at the 1-year chart of ANV (Allied Nevada Gold Corporation) below with my added notations: 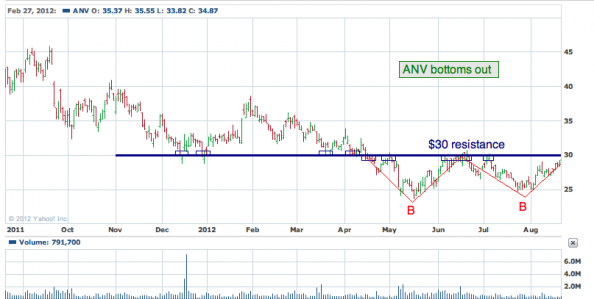 After a persistent downtrend, ANV has formed what appears to be a Double Bottom (red) price pattern. The pattern is as simple as it sounds: Bottoming, rallying up to a point, selling back off to a similar bottom, and then rallying back up again. As with any price pattern, a confirmation of the pattern is needed. ANV would confirm the pattern by breaking up through the $30 resistance (navy) that has been created by the Double Bottom pattern.

Keep in mind that simple is usually better. Had I never pointed out the Double Bottom pattern, one would still think this stock is moving higher if it simply broke through the $30 resistance level. In short, whether you noticed the pattern or not, the trade would still be the same: On the break above the key $30 level.

The Tale of the Tape: After a yearlong downtrend, ANV formed a Double Bottom price pattern. A long trade could be entered on a break above the $30 resistance with a stop placed under that level.
at 12:05 AM No comments: Links to this post

Australia: commodities boom “is over”

Fire Australia’s government, or at the very least its totally clueless Resources Minister, Martin Ferguson. Note that Australia is almost entirely a resource-producing (and exporting) economy. It is situated literally right next door to 3+ billion people in Asia who are in the early stages of catching up to Western industrialization (and living standards) – and this clod proclaims the commodities boom done?

What we have here is a classic illustration of why none of the infantile politicians in any/all current Western government are worthy of keeping their jobs – and with its Anglophone heritage Australia is an “honourary member” of this club. Mining projects (in particular) tend to take at least 5 years just to get off the ground, especially the sort of mining mega-projects of which Australia is particularly fond.

These mining projects then need markets for their production for many years to come, just to justify the total investment in mine construction and related infrastructure. Thus such planning requires thinking from a perspective which encompasses decades rather than mere years.

The Dow Jones Industrial Average fell yesterday for its biggest decline in three weeks, and intraday traded the biggest spread since Aug. 3. This was the second day of losses for the Dow. The S&P 500 suffered a similar fate but frustrated investors by touching a new four-year high, reversing and closing lower.

There appeared to be no news that directly caused the decline, yet the selling was accompanied by a slight pickup in volume. European and Asian markets were mostly higher, but crude oil futures rose for the fifth time in six sessions and $100/barrel oil has been predicted by most in that industry. But technology leader Apple (NASDAQ:AAPL) fell following Oracle Investment Research’s reduction in its investment rating, and this could have accounted for some of the selling in tech stocks.

The Dow Jones Industrial Average fell yesterday following a new high for the year and closed lower than at any time in the past three days. But what is important from the view of technical analysis is that the DJIA opened higher than the prior day’s close and closed lower than the prior day’s low. This rare phenomenon is called a “key reversal day.” This signals a reversal of the current trend, and is telling us that the near-term trend has changed from up to down. Accompanying this signal was a sell from the MACD — another reliable indicator that the short-term trend is changing.

The S&P 500 reversed as well, but its reversal was not as unusual as the Dow’s in that it failed to close lower than the prior day’s low. But it is a signal of a near-term change in trend and is close to being supported by its MACD, which is a fraction from issuing a sell signal.

Conclusion: Yesterday’s price action is a major negative for the bulls in that it confirms that the possible triple top covered in recent DTAs has been confirmed by a key reversal day in the Dow and a reversal day in the S&P 500. The reliability of the key reversal day is accepted by most traditional technicians as a “kiss of death,” since it normally precedes an overall change in trend. And the S&P 500’s reversal day — accompanied by a menacing-looking MACD — also alerts us that a significant change is about to occur. Thus, in a single day, significant sell signals occurred on the two of the market’s most-watched indices.

The "Chart of the Day" is Whole Foods Market (WFM), which showed up on Wednesday's Barchart "All-Time High" list. Whole Foods on Wednesday posted a new all-time high of $97.75 and closed +1.10%. TrendSpotter has been long since Aug 16 at $95.93. In recent news on the stock, S&P on Aug 7 raised Whole Foods' corporate credit rating to BBB- from BB+, citing the company's strong operating trends. On Aug 3, Morgan Stanley upgraded Whole Foods to Overweight from Neutral with a price target of $110 based on valuation, earnings power, and continued margin growth. Whole Foods Market, with a market cap of $17 billion, owns and operates the country's largest chain of natural food supermarkets.