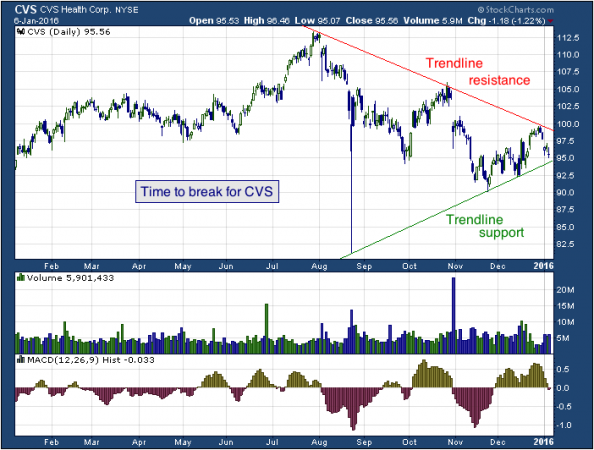 CVS has created a common chart pattern known as a symmetrical triangle. Combining a down trending resistance (red) with an up trending support (green) forms the triangle pattern. As the support and resistance converge on each other the pattern is created. Since there is no true way to know which way the stock will break, most traders will wait for the breakout or breakdown before entering a trade.

The Tale of the Tape: CVS has formed a simple symmetrical triangle. A trader could enter a long position on a break above the down trending resistance (near $98) with a stop set under the entry level. However, if CVS were to break below the trend line support (currently near $95), a short trade could be entered with a stop above the trend line.
at 12:03 AM No comments: Links to this post 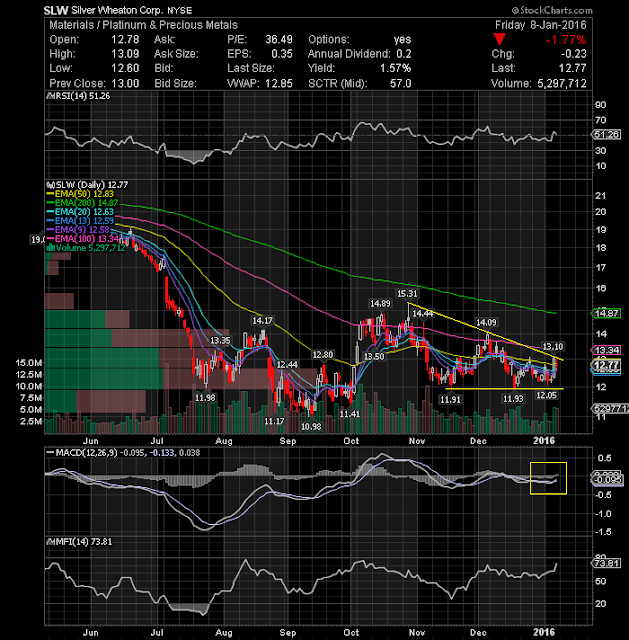 Looks like Silver Wheaton Corp. (NYSE:SLW) is about to breakout from this descending triangle pattern. On the technical charts, the stock currently is trading just above its 13 & 20EMAs with both lines providing an additional layer of support for stock. Additionally, the MACD made a bullish crossover last week. With good trading volume, the stock could be poised to trade higher to test its next level of resistence at 14.09. On watch.
at 12:03 AM No comments: Links to this post

Many investors are relieved 2015 is over. It was a year of volatile swings, but when all was said and done, the blue-chip Dow Jones Industrial average lost 2.2% and the S&P 500 was down 0.7%. Even factoring in dividends, the broader market index was up just 1.4%.

In such an environment, it's not surprising to learn that my Dogs of the Dow strategy suffered a loss after two years of triple-digit gains.

The Dogs of the Dow is a popular trading strategy. It involves buying the 10 highest yielding stocks in the Dow Jones Industrial Average, which is comprised of 30 of the largest -- and arguable safest -- companies in the world.

The idea is that the higher yields indicate better value and thus the chance for above-average returns. Indeed, the strategy does appear to deliver on that. Between 1973 and 1996, the Dogs returned 20.3% annually versus 15.8% for the Dow. And since 2000, the Dogs have gained an average of 8.3% a year while the Dow is up an average of 6.7% a year.

Following the basic strategy involves investing an equal amount of money in each of the 10 stocks on Dec. 31 and holding them for one year. But for the past few years, I've shared a variation of this strategy with Profitable Trader readers.

You may have heard of the popular variation called the Small Dogs of the Dow, which involves buying the five lowest-priced Dogs. This strategy has beaten the traditional Dogs in the past one-, three-, five-, 10- and 20-year periods.

My twist is this: I buy long-term call options on the Small Dogs of the Dow.

Last year, I recommended calls expiring in January 2016, which would give us exposure to the stocks for one year. To minimize trading costs, I chose calls with strike prices as close as possible to the stock's price at the time. The table below shows the results when the positions were closed on Dec. 31:

A buy-and-hold strategy for these five stocks would have resulted in a gain of 6%, plus dividends. Buying the call options actually led to a loss. But once again, the calls have outperformed so much in previous years that you would still be well ahead of a buy-and-hold investor if you followed my options strategy for the past three years.

This year, we're getting a bit of a late start, but this could actually work to our advantage. 2016 has not been kind to investors so far, with the Dow falling more than 5% in just the first four trading days of the year.

The nasty sell-off had little to do with anything here at home, though, and much to do with China. Twice this week, the country's newly implemented circuit breakers have been triggered on 5%-plus daily drops in the Chinese markets. Regulators meant for the mechanism to help control volatility, but it seemed to only exacerbate the problem and contribute to panic selling.

But with authorities saying Thursday they have suspended the circuit breakers, I believe we could see a rally in Chinese and U.S. stocks, meaning this mini correction may have provided us with better entry points.

My recommended January 2017 call options on the Small Dogs of the Dow are:

Buying these five call option contracts would cost about $1,622 (each contract controls 100 shares of the underlying stock).

Because these five option contracts costs much less than buying 100 shares of each of the stocks, traders can commit a smaller amount of funds to this strategy. The trading capital saved by using call options can be invested in another strategy, providing diversification and the opportunity for additional gains.

The risk is limited to the price paid for the options. If we get a significant correction or even enter a bear market in 2016, investors following a buy-and-hold strategy with the Dogs of the Dow could lose much more than that in dollar terms.