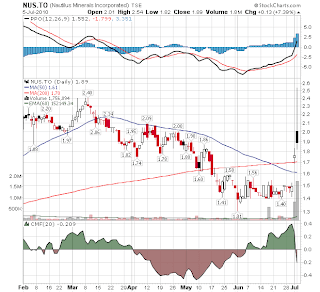 According to Stansberry & Assoc. which is selling the info. for more than $1000, Nautilus (NUS.TO) which they are code naming "Gold Sands" has the potential to be a "10 bagger" they give their reasons here (click here)

What we can tell from the chart is that someone already knew something before the July 12 date and bid the price up from $1.50 to $2.50.
Unfortunately the stock closed poorly on Monday. 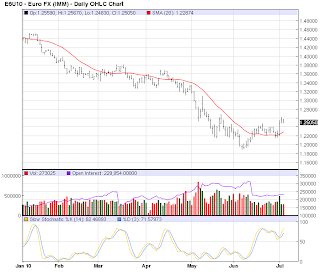 The most accurate foreign-exchange forecaster says the euro will continue to weaken and may approach parity with the dollar as the European Central Bank buys more government bonds to support the region’s economy.

Shaun Osborne, chief currency strategist at TD Securities Inc. in Toronto, said the euro will depreciate to $1.13 in the third quarter, $1.08 by year-end and may near $1 in 2011 before recovering. Osborne, whose predictions were within 4.1 percent of the mark on average, according to data compiled by Bloomberg, was echoed by the nine following most-accurate forecasters anticipating a lower euro in the next two quarters. (more)

Geologic success can only come about if a company is exploring in the right geologic terrain—a terrain that is capable of hosting a major deposit. This is, of course, easier said than done, and it is critical that the speculator in this sector be able to recognize the difference between a legitimate play and a questionable story.

Unfortunately for the speculator, Mother Nature has been very generous and supportive to the exploration sector. She has scattered gold, copper and silver anomalies all over the world, then hidden what lies beneath them under gravel and jungle. She has then left the elucidation of what lies below the surface to a discipline that is best described as art informed by science: geology. Geology and minerals exploration are not exact sciences. Minerals exploration is not accomplished through the careful mixing of measured quantities at a sterile laboratory or by complex mathematical calculations done on a computer. It is done by geologists working in the frozen wastelands and barren deserts of countries that most of us didn't know existed 10 years ago. They are invariably dealing with a limited data set and projecting that information into the third and most important dimension, depth. Testing that dimension requires drilling, an expensive endeavor that usually provides more questions than answers. (more)
at 12:55 AM No comments: Links to this post

They saw a housing boom, they saw a recession, and yet the Canadian housing market is still cooking with gas.

I spent the day in Toronto a few weeks ago and was really interested to see how a few miles can span such a huge difference in collective attitude.

Lloyd Atkinson is an economist and also an empty nester, who just sold his large family home in Toronto and downsized to a condo overlooking the city. He sold his home in one day. (more)

With the stock market lurching again, plenty of investors are nervous, and some are downright bearish. Then there’s Robert Prechter, the market forecaster and social theorist, who is in another league entirely.

Prechter is convinced we have entered a market decline of staggering proportions – perhaps the biggest of the last 300 years.

In a series of phone conversations and e-mail exchanges last week, he said that no other forecaster was likely to accept his reasoning, which is based on his version of the Elliott Wave theory – a technical approach to market analysis that he embraces with evangelical fervor. (more)

Clay Shirky: 'Paywall will underperform – the numbers don't add up' 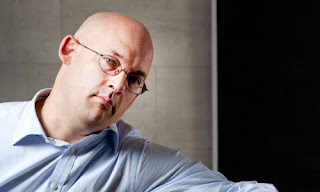 The internet guru on the death of newspapers, why paywall will fail and how the internet has brought out our creativity – and generosity.
If you are reading this article on a printed copy of the Guardian, what you have in your hand will, just 15 years from now, look as archaic as a Western Union telegram does today. In less than 50 years, according to Clay Shirky, it won't exist at all. The reason, he says, is very simple, and very obvious: if you are 25 or younger, you're probably already reading this on your computer screen. "And to put it in one bleak sentence, no medium has ever survived the indifference of 25-year-olds." (more)
at 12:34 AM No comments: Links to this post

With the US trapped in depression, this really is starting to feel like 1932

"The economy is still in the gravitational pull of the Great Recession," said Robert Reich, former US labour secretary. "All the booster rockets for getting us beyond it are failing."

"Home sales are down. Retail sales are down. Factory orders in May suffered their biggest tumble since March of last year. So what are we doing about it? Less than nothing," he said.

California is tightening faster than Greece. State workers have seen a 14pc fall in earnings this year due to forced furloughs. Governor Arnold Schwarzenegger is cutting pay for 200,000 state workers to the minimum wage of $7.25 an hour to cover his $19bn (£15bn) deficit.

Can Illinois be far behind? The state has a deficit of $12bn and is $5bn in arrears to schools, nursing homes, child care centres, and prisons. "It is getting worse every single day," said state comptroller Daniel Hynes. "We are not paying bills for absolutely essential services. That is obscene." (more)

S & P - No Confirmation Yet That The Decline Has Stopped. 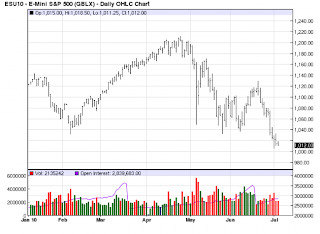 In the last article on 1 July, mention was made about a rally potential, but on a "maybe" basis. None,
of any consequence developed, and what was described as a weak market is living up to that
characterization. There is little need to get too analytical here. The trend has turned down, for some
time now on the daily, and more importantly, also on the weekly. Price remains in an oversold condition,
and the caveat issued last time about oversold conditions is that they can become MORE oversold. Always wait for a sign from the market before deciding a change has occurred. So far, none has.

We still see the low from Thursday, third bar from the end, as important for the near term. The range was somewhat contained, volume increased, and the increased effort rallied to close near the upper end of the bar. The only force that can close a market on the upper end of a bar is stronger buying over selling efforts. One would not expect to see buying stronger when price is making a new low, so that raises a red flag of caution for downside continuation. Keep in mind, price has been down eight days without any kind of relief rally. (more) 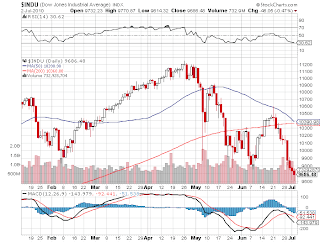