David Gurwitz of Charles Nenner Research joined us for a look at the leading markets. Obviously the precious metals have taken a hit recently. However, David sees a tradable low coming in a few short weeks. Crude oil also is trending lower but will be going up as well. Look for the Aussie Dollar to resume its climb too. We touched on a number of other markets as well. Apple seems poised to continue hitting new all time highs, which David/Charles called over a year ago. Always interesting and make sure you pay attention to the war and weather cycles.They’re affecting us all the time.

Strong emerging markets indicate stability around the world which means the US markets could continue to rally. This has moved up slowly and is not overbought at all.

If I had a large long position I’d be looking to unload as this chart is all but saying it’s about to pull back.

Today’s move could be a sign that AAPL has topped. Let’s see how it responds to support, indicated by the previous 2012 top. This is another stock I’d be a seller of, but not a shorter. There is a big difference in those trading stances. You don’t short strength, but at some time it’s smart to take money off the table.

Bigger, faster, better. That’s the turbocharged investment we all want…
Miller’s Money Forever subscribers who pay close attention to our portfolio, though, will notice that we don’t hold leveraged ETFs — those with “2x” or “inverse” or “ultra” in their names, which some investors mistake for “better.”
Don’t get me wrong, exchange-traded funds (ETFs) are a great tool for many portfolios.(more)

BP Breaks Down Into Key Target

Thursday morning’s session for BP has been a windfall for the bears.
However, shares trade on the “edge” of a support level that – if broken – simply opens price to a further sharp decline.
Let’s pinpoint this level and the view our “Color Value Area” Chart for BP: 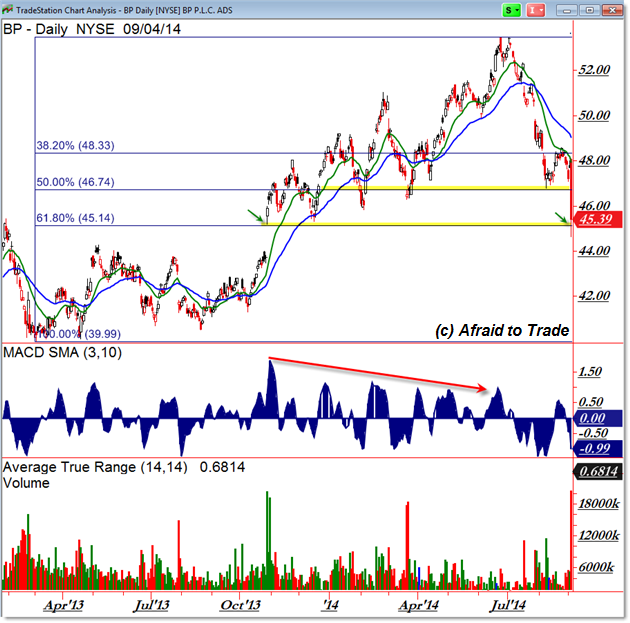 For starters, BP has reversed into a short-term downtrend after peaking (with a lengthy divergence) into the $54.00 per share area.
Price broke support and the Moving Average Orientation flipped bearish at the start of August 2014.
From there, shares continued the slide and recently triggered a quick bear flag entry into the falling 20 day EMA.
Today’s sharp gap and sell-off took price rapidly into the key inflection point and target near $45.00 per share which represents:
Ultimately we’ll watch closely to determine whether shares rally up off this support level  or else collapse through it into an “Open Air” pocket. (more)

The Fresh Market Is Ripe for the Picking (TFM) 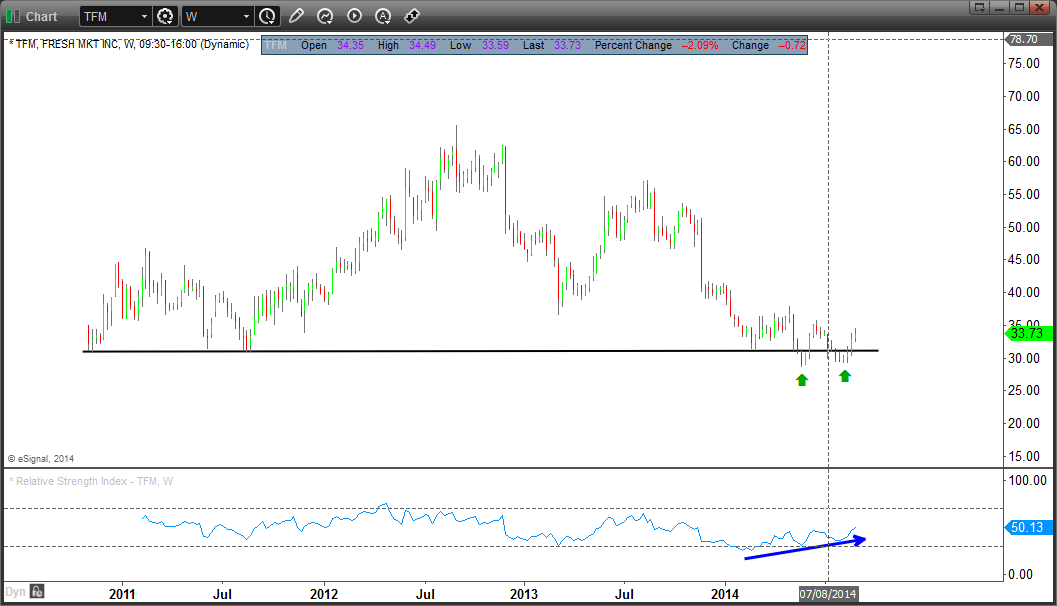 Specialty grocer The Fresh Market (TFM) was spurred last week by a better-than-expected second-quarter earnings report in which it also reaffirmed its outlook. TFM stock now has some pep back in its step, and that means opportunity for active investors and traders.

The Fresh Market Is Ripe for the Picking (TFM)Fresh Market earned 36 cents per share last quarter, 13% better year-over-year and a penny better than what the Street thought was coming. Meanwhile, revenues grew 19% to $422.2 million, also beating analysts’ calls for $411.9 million. (more)

One REIT Ready to Breakout

The continued search for yield by investors has pushed the DJ US REIT Index (DJUSRI) to a 17.8% gain for the year compared to the Spyder Trust’s (SPY) 9.6% gain. Many investors buy based on yield alone but I have long advised that you need to do much more fundamental as well as technical research before you buy a high yielding instrument.

For many years, I have recommended that investors avoid Annaly Capital Management, Inc. (NLY) because of its very weak technical outlook. This was more important than its high yield and for the past three years NLY has had a total return of -0.50%.
So, how do the REITs look from a technical basis and are any worth buying now? (more)

It has become axiomatic, for good reason, that the mining shares tend to lead the gold price whether they are moving higher or moving lower. For whatever reason, the connection is fairly solid and has been for many years.

That being said, the combination of a deteriorating chart for the metal and the fact that the ratio ( HUI to Gold) is rolling over, does not bode well for gold at the moment.

Take a look at the following chart noting the HUI/Gold ratio and comparing that to the Gold price ( dark blue line). Can you see the very close connection? You can almost lay the gold price atop this ratio and see where it is generally headed as the lines follow each other quite closely. 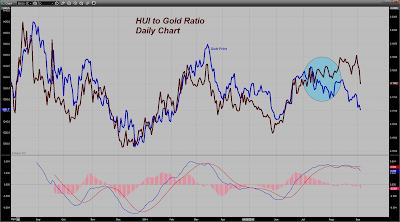 It is pretty accurate with some brief exceptions. I have noted one of those within the ellipse area in late July the shares seemed to hold up a bit better than the overall gold price. Come August however, the relationship seems to have been restored.

The indicator below is tracking the movement generating both buy and sell signals on the metal based off the action of the shares. As you can see, it is currently in a bearish mode.


Here is a chart of the GDXJ or juniors. It failed to extend past 46 and now looks like it is heading back down to the bottom of a potential range near 34-33. 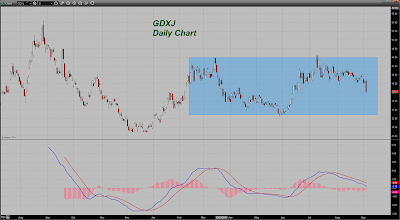 The Top 5 Rules You Need to Know Before You Buy a Stock: Dan Ferris