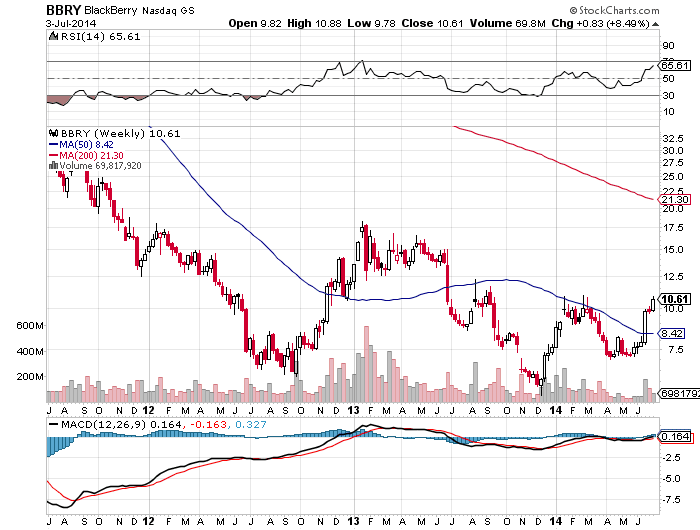 In December of 1999, RadioShack Corp. (NYSE: RSH) stock was worth more than $76 per share. Today, RSH is worth less than $1.
It has joined a group of once-profitable industry leaders that can now be classified as penny stocks.
Some companies, like General Motors Co. (NYSE: GM), are able to rebound from penny stock levels.  (more)

This Is Why You Are A Terrible Investor 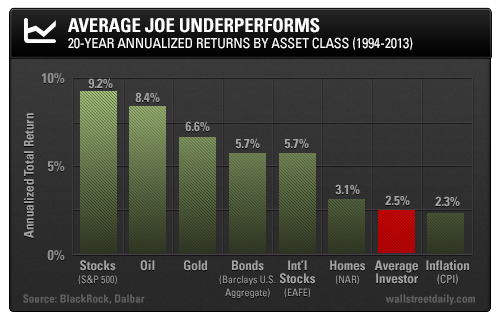 Over the past 20 years, the S&P 500 has produced a 9.2% annualized total return.
Over the same period, gold has returned an annualized 6.6%.
And bonds? The Barclays U.S. Aggregate Bond Index has returned 5.7%.
Based on these figures, what type of return do you think the average investor has achieved over this time period?
The answer will shock you…
Quantitative analysis from DALBAR, a financial market research firm, shows that the average investor has realized a measly 2.5% return over the past 20 years.  (more) 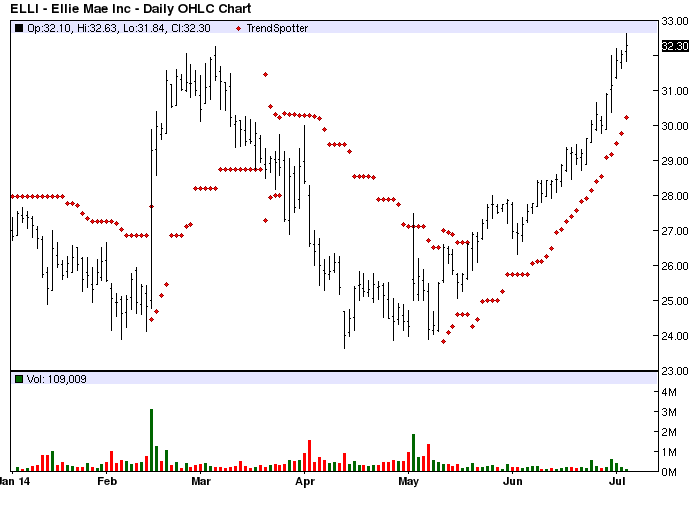 The Chart of the Day belongs to Ellie Mae (ELLI). I found the stock by sorting the New High List for new high frequency in the last month then used the Flipchart feature to find the chart I liked. Since the Trend Spotter signaled a buy on 5/12 the stock gained 21.79%.

ELLI operates electronic mortgage origination networks in the United States. The Company's network and technology-enabled solutions help streamline and automate the mortgage origination process. Solutions offered by Ellie include Encompass software, a comprehensive operating system that handles key business and management functions involved in running a mortgage origination business, and serves as a gateway to the Ellie Mae Network. Through its solutions the Company also offers services like: automated preparation of the disclosure and closing documents; electronic document management and websites and electronic connectivity. Ellie Mae, Inc. is headquartered in Pleasanton, California.

Penn Virginia Corporation, an independent oil and gas company, is engaged in the exploration, development, and production of crude oil, natural gas liquids, and natural gas in various onshore regions of the United States. Its operations include the drilling of unconventional horizontal development wells in shale formations primarily in the Eagle Ford Shale in South Texas. The company also has operations in the Granite Wash in the Mid-Continent, the Haynesville Shale and Cotton Valley in East Texas, the Selma Chalk in Mississippi, and the Marcellus Shale in Pennsylvania. As of December 31, 2013, it had 1,213 productive wells; owned approximately 280,400 acres of leasehold and royalty interests; and had proved reserves of approximately 136 million barrels of oil equivalent.
To review Penn’s stock, please take a look at the 1-year chart of PVA (Penn Virginia Corporation) below with my added notations: 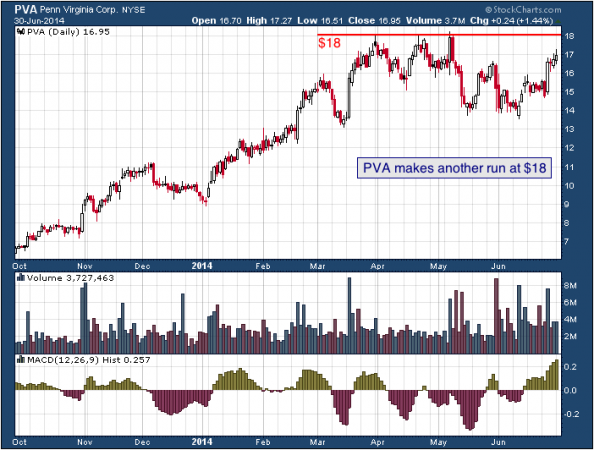 Since October of last year PVA has worked its way higher. Over the last 3 months though, the stock has formed a key level of resistance at $18 (red). That resistance is also a 52-week high resistance. After a sharp drop back in May, the stock appears to be headed back up towards its $18 resistance.

The Tale of the Tape: PVA has an $18, 52-week high resistance level to watch. A long trade could be made on a break above that $18 with a stop placed below it.
Please share this article
at 12:04 AM No comments: Links to this post

The $79 level is key support that goes all the way back to 2011. If this level is broken then this currency could head down to the $75 level with the $73 being the ultimate bottom.