What is CDS or credit-default swaps (Video)

Simply stated a credit-default swap, or CDS, is a way for the owner of an asset like a bond to buy an insurance policy to protect themselves in the event the issuer of that bond defaults.

But, because the CDS market is unregulated, there is $60 trillion of so in these instruments that are not only purchased by actual owners of the debt, but by speculators betting that the issuing entity will indeed go out of business.

When the economy was “good” and there was little incidence of company’s defaulting, banks sold and took in the premiums with what seemed to be very limited risk. Limited risk because the chance that the company or country issuing the debt would go under was somewhat remote.

The banks would therefore take in premiums and for the most part not have to pay out “claims” on the defaulted paper that they had insured through CDS. Premiums, as the chart below the video shows, are commensurate to the perceived risk that the debt issuer may actually default.

The financial crisis of course proved this idea of low risk of default to be wrong. Now with companies andcountry’s like Greece potentially facing the fate of default, the CDS sellers are once again facing huge exposure. This exposure to CDS has crippled many financial institutions.
CDS explained and a chart of country or sovereign debt with the current cost to insure
Without getting into the technical aspects of CDS, the chart shows the exorbitant cost to insure the debt of Greece because it is considered to be extremely close to a default.
On the other hand, the cost to insure U.S. treasury bonds is about 1/38 the cost of Greece sovereign debt. The more perceived risk, the higher cost to insure
at 12:10 AM No comments: Links to this post

Are We Running Out of Silver? 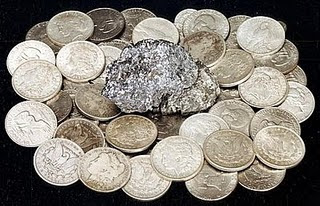 Silver has been on fire over the last three years — substantially outperforming its spotlight-grabbing cousin, gold.

Because we believe this bull run is far from over, we advise investors to always maintain exposure to the precious metals markets. Even if you haven’t yet participated in the run-up of both gold and silver, I’m glad you’re ready to take a look at the investment potential of silver.

The question every investor faces in a bull market is: Do I buy now, anticipating prices will continue higher — and chance getting clobbered if a correction arrives? Or do I wait for a pullback and possibly miss out on big gains? There’s risk either way.

Our goal in this report is to suggest various ways you can invest in silver, while underscoring the importance of patience and discipline. Investors must remain patient to avoid chasing silver, overpaying, and draining their cash. Instead, we recommend that you use temporary price declines to steadily accumulate the best silver stocks and your preferred form of bullion.

Looking back after this bull market has finally run its course, we think gold and silver will have amply rewarded those who bought smart, had meaningful exposure, and stayed the course.

Silver: The Lay of the Land

There is ample data on the silver market to consider, but there are two specific issues regarding supply and demand that are critical to understand.

The first is industrial use. Demand from a number of industries that use silver has been flat or falling. Household demand for silver like cutlery, flatware, and candlesticks hasn’t risen in ten years. Jewelry fabrication is up but a blip. With the shift to digital photography and image storing, use in photographic film processing continues to fall. And yet, total demand from industrial users keeps climbing. 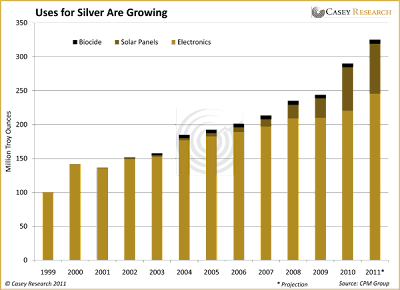 Since 1999, consumption in electronics has increased 120%. Silver use in solar panels began in 2000, and usage is up 640% since. Silver was first used in biocides (antibacterial agents) in 2002 and, while a small percentage of total silver use, it has grown six-fold.

The point is that not only are the number of uses for silver growing, the demand within each of those applications is rising as well. This is important to keep in mind because, traditionally, the industrial component of silver tends to keep the price soft in a poor economy – and Doug Casey is convinced we’re on the cusp of the Greater Depression.
However, these increasing sources of demand are now more likely to keep a floor under the price in the future. In fact, the Silver Institute forecasts that total industrial use of silver will rise by 36% over the next five years, to 666 million troy ounces/year. That’s a lot of silver, meaning this portion of demand, which is roughly 60% of all fabrication, isn’t letting up anytime soon.

The second issue is mine supply. Silver mine production has been increasing over the past decade, largely due to rising prices, allowing companies to ramp up production and bring more metal to the market. In fact, global mine production is up 33% since 1999. Meanwhile, total demand, as you’ll see in the chart below, is also rising.

Mine Production Can’t Keep Up with Demand 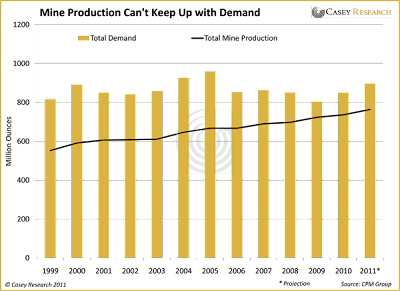 So what’s the concern?

In spite of miners digging up more and more silver, production alone can’t meet global demand, and the gap has to be filled by scrap silver coming to market.

And there’s a catch with scrap. While scrap metal comprises about 20% of silver’s total supply, many of these new applications are difficult to reclaim. Some applications contain such small amounts that they’re uneconomic to recapture, such as many biocidal and nanotechnology applications. With others it’ll be a long wait. Solar panels, for example, have a 20- to 30-year life. Still others are waiting on more effective recovery programs; more than half of all silver in cell phones, TVs, computers and other electronics, for instance, still ends up in landfills.

In other words, a growing portion of the silver that’s consumed won’t be returning to the market anytime soon.
at 12:08 AM No comments: Links to this post

Jim Rogers : "...My goodness what are we wasting our time on some congressman about when the world is facing disaster here and abroad , we are the largest debtor nation in the history of the world Dylon we got to do something about it , Greece is banckrupt the rating agencies are right they will not be able to pay , somebody better getting prepared even if it is just the viewers of your network getting ready to protect themselves "
at 12:06 AM No comments: Links to this post

Curt Renz interviews Richard Arms, President, Arms Companies on 2011 JUN 15. DISCLAIMER: The opinions of interviewees are not necessarily the same as those of Curt Renz. He makes no trades based on prior knowledge. You are responsible for your own investment decisions and are advised to perform further research before making them. 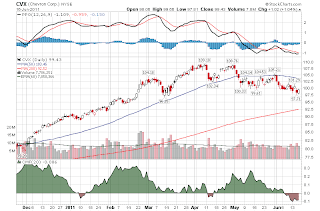 One of the oldest metrics used is the price earnings (P/E) ratio. It is calculated as the market value per share divided by earnings per share (EPS). A high P/E ratio infers that investors expect strong future earnings growth. Conversely, a low P/E suggests limited future growth. These are the companies that have historically been in a position to return large sums of cash to their investors as dividends.

This week week, I screened my dividend growth stocks database for ultra-low P/Es. Below are 10 dividend stocks stocks with a P/E less than 10:

Lockheed Martin Corp. (LMT)
Yield: 3.9% | P/E: 9.7
Lockheed Martin Corp. is the world's largest military weapons manufacturer and is also a significant supplier to NASA and other non-defense government agencies receiving about 93% of its revenues from global defense sales.

Chubb Corporation (CB)
Yield: 2.5% | P/E: 9.1
Chubb Corporation as one of the largest U.S. property-casualty insurers, Chubb has carved out a number of niches, including high-end personal lines and specialty liability lines coverage.

As with past screens, the data presented above is in its raw form. Some of the the companies would be disqualified for poor dividend fundamentals. However some of the others may be worth additional due diligence.

A 40 percent plunge could be in store for the Standard & Poor’s 500 Index, according to a research firm that employs investment guru Nassim Taleb as “chief scientific advisor.”

Taleb, of course, wrote the renowned book “The Black Swan: The Impact of the Highly Improbable.”

“At current valuations, . . . there is . . . a 20 percent chance of a well-over 40 percent correction in the S&P 500 within the next few years,” Universa chief investment officer Mark Spitznagel writes in a paper obtained by CNBC.

A ratio of the total market value of companies divided by their total assets points to the big plunge, Spitznagel argues.

Perhaps the prediction should be taken with a grain of salt given that Universa, which manages about $6 billion, invests in insurance that would hedge against stock market losses.

But “this is very general broad market research,” Spitznagel told CNBC. “[We’re] telling it like it is.” Taleb didn’t participate in the report.

U.S. stocks are rebounding from recent losses Thursday. But many market participants remain bearish like Universa.

“I think investors are still focused on what will potentially come out of Greece," said Joe Quinlan, chief market strategist at US Trust, tells Dow Jones. "Anyone putting money into equities today is being defensive."

One of my buds on twitter just mentioned Apple (AAPL) broke below the 200 day moving for the first time in a few years. Technically it is half right - the 200 day simple moving average is $325.50, while the 200 day exponential is $320.50ish. So still above the latter (which I use) but now firmly below the former (which many others use) by a good $3.50.

This is the first time in over 2 years that has happened. Obviously this is the de facto 'bell weather" stock.
at 12:04 AM No comments: Links to this post

Which Countries are Most Exposed to Greece

Here’s an awesome graphic of which countries are most exposed to Greek debt. If Greece defaults, France and Germany will suffer the most For a better sense of how these declines figure into a larger historical context, here's a long-term view of secular bull and bear markets in the S&P Composite since 1871.

For a bit of international flavor, here's a chart series that includes an overlay of the S&P 500, the Dow Crash of 1929 and Great Depression, and the so-called L-shaped "recovery" of the Nikkei 225. I update these weekly.

These charts are not intended as a forecast but rather as a way to study the current market in relation to historic market cycles.