It seems everyone, including investors, are coming to grips with the fact that higher crude oil prices are here to stay. The fact is, the U.S., China, and other world economies have a insatiable demand for oil. While we are dependent on the Middle East for most of our oil, there are alternatives. The Canadian oil sands region is in the Alberta region of Canada. This massive area of oil reserves is second in size only to Saudi Arabia. 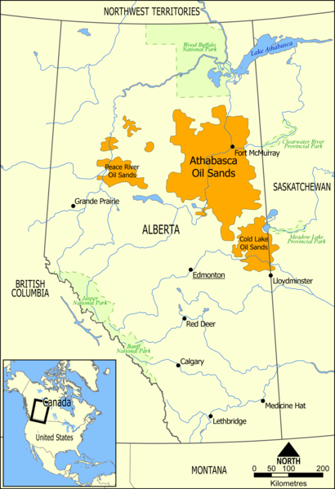 Oil from this region must be extracted from the sand at a cost of about $30-$40 per barrel of oil. The process has become viable in recent years due to the increasing cost of crude. With tensions flaring across the Middle East, we are reminded of the vulnerabilities of economies that have become so dependent on oil. It is great to know that we have a friendly neighbor to the north with vast amounts oil. The Canadian government has been more than willing help fill the oil demands of both the U.S. and China.
Earlier I wrote an article about an ETF that gives you exposure to the oil sands as a way to profit from rising crude prices. Now I am going to focus on individual companies that garner a significant amount of their revenue from oil sands production. The four companies in this article all trade on U.S. exchanges. Each of these four companies give you exposure to the oil sands and rising price of crude oil. In fact, the price of crude doesn't really even have to rise for these companies to remain profitable. It only has to stay high. Most people, including myself, don't see a steep drop in oil prices any time in the near future. Each of these four companies are components of the ETF I wrote about earlier.

Canadian Natural Resources (CNQ)
Canadian Natural Resources has the lowest exposure to the oil sands in the group. The company gets about 15% of production from the oil sands. The remaining oil production comes from other parts of Canada, the North Sea, Ivory Coast, and Gabon. The company's midstream activities include a natural gas pipeline and an electricity co-generation system. CNQ is probably the safest play on the oil sands because of its diversification. If a future U.S. energy policy includes natural gas, the company will benefit. CNQ trades at a reasonable 18 times forward earnings. The dividend yield is lowest of the group at only .68%. Revenues have grown nicely at 7% annualized over five years. Out of eleven analysts covering the stock; four rate it a strong buy, five rate it a buy, and two rate it a hold. (more)
at 12:08 AM No comments: Links to this post

Is Crude Breaking Down?

We commented last week on crude oil’s recent fall after briefly skyrocketing due to fears of Middle East unrest. We believe that crude oil is becoming even more attractive of a long commodity position due to its recent troubles.

As can be seen from the chart, after the recent 2 day breakout during Egypt’s political upheaval, crude has fallen back to exactly where it was before geopolitical issues sparked the rally. Even though it has fallen precipitously recently, we remain attracted to crude oil as a play on rising inflation and loose global monetary policy.

We have commented at length about our belief in commodities as a beneficiary of the coming inflationary period. Inflationary policies enacted by the US, UK, Eurozone and Japan are causing the loss of confidence in traditional major currencies, a phenomenon already underway. The European debt crisis, the US municipal debt problems, Japan’s currency debasement policies, and the UK’s recent relapse into negative GDP territory show that these economies have no recourse other than to print money to get out of their problems.

The prime beneficiaries of loose global monetary policy are commodities. Since commodities are priced in US dollars, as the US dollar loses value, the prices of commodities rise due to demand by foreign buyers. This phenomenon should provide a bid to commodities, and crude oil in particular.

In addition, as we discussed last week, US manufacturing is recovering more quickly than the overall economy due to the US dollar losing value against emerging market currencies. This should be bullish for energy demand going forward.

The chart shows that crude has been rising slowly in a steady trend as denoted by the trend channel. Currently, crude is at the very bottom of the range. However, given the exuberance in the equity market, a pullback in stocks could cause crude to fall slightly further before resuming the uptrend.

We view the current entry point as attractive, but with a possibility of further correction. The 200 day moving average at $80.73 should provide hard support for crude. A break below $80 for crude would require a large macroeconomic shock.

As long as crude does not fall more than 15.5% over the next 60 days, the trader will collect the full $540 per contract and the option will expire worthless

As the outlook is not completely certain, but long-term fundamentals look good, we favor a more conservative strategy than an outright long position on crude oil. With crude oil volatility continuing to be elevated, we recommend selling out of the money put options against crude oil futures.

The May 78 puts can be sold for .54, or $540 per contract. Such a position would be profitable as long as crude oil trades above $78 per barrel on April 14. Because crude oil futures are in contango, the May futures contract is trading at 92.35. As long as crude does not fall more than 15.5% over the next 60 days, the trader will collect the full $540 per contract and the option will expire worthless.

Lakshmi Capital
at 12:08 AM No comments: Links to this post

In the fall of 2008, the Federal Reserve responded to the Lehman bankruptcy by igniting a rapid expansion in the US money supply. It did so because, by its lights, the immediate and obvious menace to the economy was a deflationary collapse – with one giant bankruptcy begetting another. The Fed went about the task without compromise; the monetary base more than doubled in less than a year, and the public’s M1 money supply (checkable deposits plus hand-to-hand currency) jumped by 20%.

To many investors, this policy seemed to guarantee price inflation sooner or later – which, when it arrived, would mean higher interest rates and falling prices for long-term bonds, including Treasuries. But “sooner or later” is a nearly useless observation.

In the fall of 2008, Treasury bond yields did not rise; they plummeted, as investors scurried into the safety of Teasurys. The fear brought on by the bursting of the housing bubble, tumbling stock prices, the near-death experiences of large financial institutions, and the well-publicized bailouts of public companies, trumped any concerns about inflation somewhere in the future. The compelling desire, especially among institutional investors, was to escape default risk, and that meant buying Treasuries. Inflation was a hypothetical event that could be dealt with later.

For those investors who’ve followed the inflation-vs.-deflation debate and who’ve come down on the side of inflation, shorting Treasuries looks like a sure thing. But the timing of this trade has been anything but a sure thing. Throughout the last two years, every time Treasury yields started to rise, some unexpected piece of bad news and/or exogenous event would push yields back down again: Bad news from somewhere would revive fears of everlasting recession, a new wave of defaults, or a tumble into a deflationary abyss. Housing prices would take another step down. The reported unemployment rate would stall or rise. The specter of a default in the sovereign debt of a European country would reappear. And every time, whatever the problem, it would stimulate flight-to-safety demand for US Treasury securities. So there was no sustained rise in T-bond yields. (more) 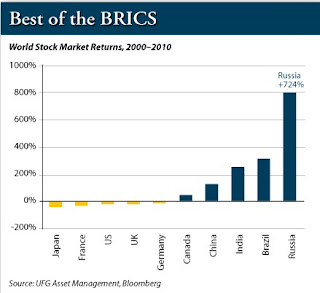 When we pointed out our volume chart earlier, which indicated that volume is now a laughable joke, we received one of the traditionally amusing responses, "ZH misses the point on volume because they data mine and only compare it to the volume during the crisis. SPY volume is STILL higher today than it was pre-2007. So are we to believe that the crisis volume levels are the "real" levels for volume? If you compare back to pre-crisis, volume is actually still pretty high." Here is our response.

And incidentally, here is why the Deutsche Borse better be able to sell the NYSE for scrap value.

No worries though - the NYSE liquidation value should be surging quite soon. We hear all those collocation boxes can fetch a pretty penny when the price of stainless steel hits infinity.

Federal deficit on track for a record this fiscal year Government debt to exceed U.S. economy

President Obama‘s budget, released Monday, was conceived as a blueprint for future spending, but it also paints the bleakest picture yet of the current fiscal year, which is on track for a record federal deficit and will see the government’s overall debt surpass the size of the total U.S. economy.

Mr. Obama‘s budget projects that 2011 will see the biggest one-year debt jump in history, or nearly $2 trillion, to reach $15.476 trillion by Sept. 30, the end of the fiscal year. That would be 102.6 percent of GDP - the first time since World War II that dubious figure has been reached.

And the budget projects the government will run a deficit of $1.645 trillion this year, topping 2009’s previous record by more than $230 billion. By contrast, 2007’s deficit was just $160 billion altogether.

Still, amid the other staggering numbers in the budget Mr. Obama sent to Congress on Monday, the debt stands out because Congress will need to vote to raise the debt limit later this year, and because the numbers are so large. (more)
at 12:05 AM No comments: Links to this post 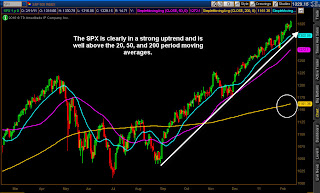 However, Mr. Market’s appetite for oil bears has diminished tremendously over the past week as the U.S. Dollar and geopolitical news coming out of Egypt pushed oil prices lower. Mr. Market’s appetite is always changing it would seem, but right now he is enamored with S&P 500 bear meat and not really that interested in the oily bear meat. The question remains whether his tastes will change in the near term, or if he will continue to turn S&P 500 bears into fodder and steak.

With all metaphors and short stories aside, the price action in the S&P 500 for the past several months has been devastating for bears. Going back to November of 2010, every key resistance level ended up being taken out by the bulls and prices pushed higher and they push higher still. Last Friday’s close pushed prices to new recent highs and in time prices may challenge long term overhead resistance levels. The table below shows just how extended the equity market is: (more)

Copper at record high on China trade data Silver atop $30, its best since early January

Gold futures settled in with modest gains, a reversal following two sessions of losses, and silver closed at a six-week high, inching closer to $31 an ounce.

“Chinese trade data for January showed a robust increase in copper imports which took the market by surprise,” said Gayle Berry, an analyst with Barclays Capital in London.

Traders had expected imports to fall. “China had been a drag on prices for the past 6 months or so as it destocked but this recent recovery in imports has removed some of the drag, propelling prices higher,” Berry added. (more)